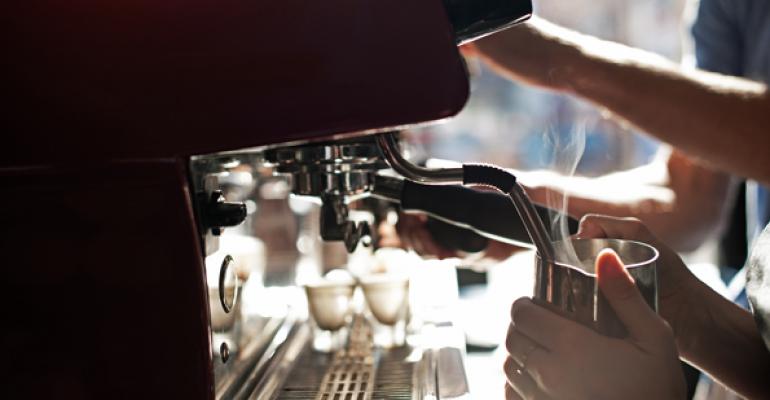 The corner coffee shop, once a place primarily to grab a cup of joe on the way to work, has upped its culinary chops. Today’s coffeehouses have placed a renewed emphasis on the food they serve, broadening the options, adding more quality ingredients and in some cases even hiring experienced chefs to create robust menus.

Much of the coffee shop food revolution reflects the third space phenomenon—the spot between home and work. While the coffee is there to keep us caffeinated, food is a necessity for those rabbit-hole projects that keep people in coffee shops for hours at a time. Bagels and muffins no longer do the trick.

Chef Paul Virant is no stranger to working in a coffee shop; in fact, he says he’s done the majority of his creative work as a chef while sitting in one.

“I like the buzz, the energy, you can people watch, it’s usually kind of a cool vibe with the music,” Virant says.

So when the James Beard Award-nominated chef was brought on board as executive chef at Elaine’s Coffee Call, a European-style café in Chicago, he set out to help deliver that vibe. Elaine’s has become a hangout for Hotel Lincoln guests as well as neighborhood residents. Because one of the hotel restaurants was not open for breakfast, the team at Elaine’s saw an opportunity to capitalize on the morning crowd. One of Virant’s signature items is a whole-wheat crepe stuffed with a variety of breakfast foods.

Like many coffee shops, the kitchen at Elaine’s is “a shoebox,” Virant says. “So we asked what hot food can we do in a Panini press? The idea was we’d make these crepes, fill them and then heat them in the Panini press. They’ve been a staple hot item.”

The coffee shop meal movement was led, or at least brought to national attention, by Starbucks, Tristano says. He says today’s coffee shops are reminiscent of a patisserie, a traditional European bakery that specializes in pastries.