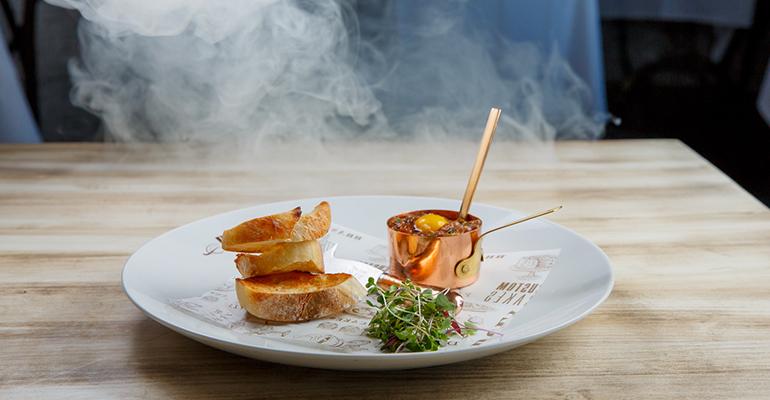 Chefs use smoke to bring 'wow' factor to the table

Everyone loves a show. From flames igniting a Bananas Foster to a larger-than-life hot fudge sundae making its way across a crowded dining room, operators love to hear guests say, “I want what she’s having.”

Not only does smoke impart a rich flavor to almost anything from cocktails to entrees, the accompanying show is an added bonus for customers. “Our guests usually take photos and videos of the process of lifting the dome to release the smoke, and then they post it on social media and tag us,” says chef Dmitry Rodov of Duet Restaurant in New York’s West Village, which sells around 50 smoke dishes per week.

“People eat with all five of their senses, and aromas and sounds from the grill add to the flavor,” says chef Teddy Diggs at Il Palio, Chapel Hill, NC. “The wood grill produces all of our crostinis, proteins and vegetables, and lends its abilities throughout the menu, with best sellers including the hay-smoked gnocchi, smoky blueberry honey gelato, and an ‘Old Smoky’ cocktail made with smoked brown sugar bacon.”

Besides looking cool, chefs say that smoke’s subtle flavors and comforting aromas appeal to guests. “Using smoke is a great way to enhance the natural flavors of the dish, as well as drive some of the flavors of the smoke itself into the dish,” says Rodov. For dishes like beef carpaccio or beef tartare, it’s a subtle element that’s added to the flavors, and it blends perfectly with the meat. Smoke is also a fantastic way to add an artful touch that helps us engage with guests.”

Chef Dwayne Edwards of The Ritz-Carlton, Lake Tahoe, agrees, adding, “Smoking brings beautiful nuances and complexity to a dish while still playing on some foundational barbecue flavor profiles,” he says. “I've found cherry wood to be my favorite for our smoked watermelon salad. The reaction has been amazing, and the salad is, by far, one of our best sellers.”

In Las Vegas, executive chef Christopher Heisinger serves an Oyster Beef Tartare with rye, wasabi and crème fraiche on the Sage at ARIA’s Chef’s Tasting Menu. “I love the smokiness of bonito flakes, and wanted to find a way to create a similar flavor profile using oysters,” he explains. “The oysters’ brininess and the smoke create a surprising, yet delicious, combination. People are pleasantly surprised by the tasty flavors created by layering smoky seafood with beef tartare.”

What about a smoked sandwich? Chef Michael Neflas says he sells 25 to 30 Smoked Wagyu Tri-Tip sandwiches per week at BOA Steakhouse in Santa Monica, CA. “I wanted to create a sandwich that would be a perfect summertime dish and I liked the idea of the Wagyu Tri-Tip because the flavor is out of this world,” says Neflas. “I remembered that Santa Maria-style Tri-Tip is done over a wood grill, so we tried smoking the whole sandwich to order and it worked out great,” The sandwich is served to guests under a glass cloche, which is filled with smoke. “It’s slightly deceiving since the guest can’t see the sandwich until we remove the cloche,” he says. “There are usually a few ‘Wows!’ and ‘Woahs!’”

One chef says that the aroma of smoke can even have a transformative effect on a guest’s surroundings. “Food that is served from a wood fire is relaxed and comforting, and the seductively smoky ambiance helps to transform our marbled hotel into the home of an Italian family,” says Diggs. “The aroma and flavors of smoke create a visceral bond with the diner.”

If one thing can be said about smoking, it’s that no two chefs seem to do it the same.

“I use a smoker, which comes with a set of wooden chips from strawberry, apple and cherry trees, and a large glass dome,” says Rodov. “I insert these wooden chips into a small valve in the glass dome, which allows me to inject the smoke and aromas into the dish without having to lift the hood. The glass dome traps the smoke completely over the dish, and we then we bring it to the guests covered, where either myself or one of my staff members lifts the glass dome in front of the guests to create that ‘wow’ effect.”

“I use a basic smoking technique in which I place apple wood chips in a pan filled with ice and light them on fire,” says Heisinger. “Then I place the oysters on ice in a container, blow out the chips, wrap it all together and let it sit for 15 minutes.”

“We use North Carolina red and white oak to stoke our grill, and by controlling the heat of the wood, we can create different intensities of smoke,” says Diggs. “We also cold smoke cheeses, nuts and fish; to do this, we combine smoking embers of wood on one side of a lidded pan and the cheese (or other food) on the other, allowing the smoke to slowly permeate the food.” Diggs says he also likes to use the flavor of smoked hay, which lends a subtle and unique sweet smoke characteristic. “Our popular gnocchi dish is made daily by roasting the potatoes on a bed of toasted hay,” he says. “We also infuse the toasted hay into the tomato sauce that dresses the dumplings.”

For The Ritz-Carlton’s smoked watermelon salad, Edwards uses a cold smoke method as well. “We cold smoke the watermelon so that the texture is unchanged,” he says. “This way you get a beautiful flavor and the pleasant crunch of watermelon.”

No matter how you smoke it—with a high-end smoker or two pans and some wood—it may be time to give smoking a try in your own restaurant.