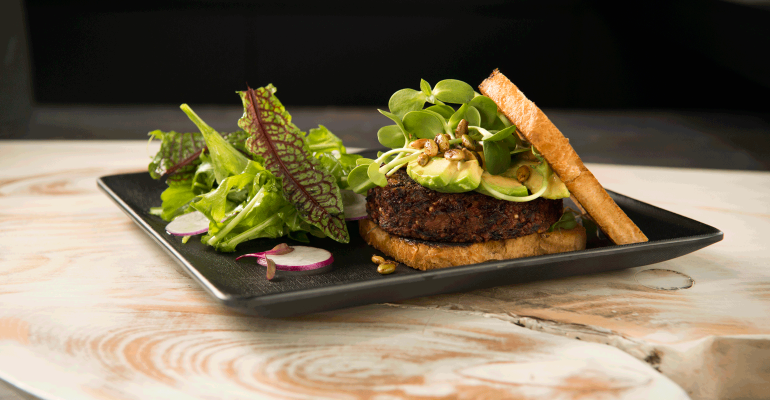 The alchemy of bread is one that seems to draw certain chefs in and doesn’t let go. And with a growing number of consumers eschewing traditionally milled wheat flour, there’s good reason for chefs to rethink the bread-making process.

“We look at food from a holistic, nutritional focus,” said Lauren Seibert, pastry chef at Vital Root, chef Justin Cucci’s vegetable-focused fast-casual concept in Denver. “Often, that doesn’t include things like bread. But we’ve been able to produce crusty-with-a-fluffy-inside bread without using things like wheat.”

At every location of Vital Root, part of Cucci’s Edible Beats family of restaurants that includes Root Down, Linger and Ophelia’s, a pastry production lead bakes fresh bread early every morning using alternative grains, such millet, sorghum, quinoa and amaranth, with flax seed as a binder.

The resulting bread becomes avocado toast in which the toast isn’t an afterthought. It also shows up in an extra-seedy, super-savory French toast and a line of open-faced sandwiches that changes with the seasons. The bread is even on the kid’s menu, which includes to-go bento boxes with AB&Js, or almond butter and jam. “It’s been interesting. It’s a lot of trial and error,” Seibert said. “I found out very quickly that when you replace [traditional] grains, there’s not that one-for-one replacement ratio. Because all grains bring something different to the table.”

For example, Seibert found that amaranth and millet both impart a faint earthy flavor to the bread; sorghum is a powerful structural component; quinoa can add a slight grittiness that reproduces the bite of a beautiful slice of whole-wheat toast.

Certain pitfalls also had to be overcome: bread can become gummy if water-absorbing grains are present, for example.

But when flax replaces eggs, it can “mimic the magic that eggs bring to the table,” Seibert said. “And then between chia and sorghum husks, you can get texture and flavor.

“Gluten-free bread gets a bad rap because if you’ve had bread, you want bread. Some people just stop when they create a gluten-free bread,” she added. “But where I’m at, you have to keep going to look at salt, the flavors and how you get something to brown evenly.”

Pammy’s, a recently opened 85-seat New American trattoria in Cambridge, Mass., is going for rustic comfort. And one way to convey a homespun feeling is bread from grain that is milled in house.

“I think that our bread is wonderful because it has this airy sort of crumb to it,” said Chris Willis, chef at Pammy's, which he co-owns with his wife Pam Willis.

Using house-milled flour is a point of pride and gives the restaurant a story to tell customers, he added. But it’s very labor intensive.

“The flour you get in the market is crushed with a mill like ours, but much larger. They sift out the endosperm of the wheat berry. But in our case, we’re crushing it. We have a lot of flavor and we’re keeping some of the bran,” Chris Willis said. “It’s kind of a hybrid in that sense. It’s a less-refined flour; more rustic.” Whomever is in the kitchen late at night will mill the next day’s flour in the wee hours, ready for pastry chef Mareena McKenzie to bake in the morning. A few pounds of flour are produced every day and mixed with a proprietary blend from a local artisanal mill to bulk up the volume while keeping those rough-hewn qualities.

Based on the Pugliese style of bread from Southern Italy, Pammy’s signature bread is full of air pockets.

McKenzie uses a trusty six-year-old sourdough starter, combined it with an interpretation of a ciabatta bread recipe and a little semolina. The resulting wet dough is worked gently.

“I gently pick up a piece of dough with my hands in front of me, and I stretch the dough, putting one hand on top of the other,” McKenzie said. “I’m not taking it and punching it and all that jazz. I’m gently flipping it over. Then I blast it at a very high heat in our oven and I introduce a bit of water to steam it so it can rise before forming a crust. As soon as it starts getting golden, I take it out and spray it with a light sheen of olive oil.”

The result is an earthy loaf, ready for toasting or grilling to make a perfect pillow for hearty sandwiches.

“We typically slice the bread and rub it with a cut garlic clove and grill it or toast it in a pan with olive oil,” Chris Willis said. “And then it’s perfect for sandwiches. For me, texture is really important in a sandwich and this bread crisps up really nicely when heat is applied.”

A thrifty brewmaster may have been the originator of using spent grains in bread.

For Hari Cameron, chef-owner of a(MUSE.) in Rehoboth Beach, Delaware, it’s about reducing food waste but also about flavor. “In my area, there are a lot of spent grains to be had,” Cameron said. “Many of the breweries give the spent grains to local livestock like pigs and cows. Even with that, there’s still plenty to be had. I started using them to reduce waste and kept using them in interesting ways for the flavor.”

Different spent grains will add different elements to bread, he said. Overly malty grains impart a too-roasty profile, for example. And he doesn’t add more than two-thirds spent grain or less than one-fourth in ratios to regular flour.

Cameron grinds the spent grains to unlock more flavor and improve the texture, sometimes adding a splash of beer in its traditional frothy liquid form into the dough to further accent the flavor.

CORRECTION, Dec. 4, 2017: This story has been corrected to reflect the correct title of Chris Willis, who is the chef at Pammy's. An earlier version referred to Pam Willis as the chef.