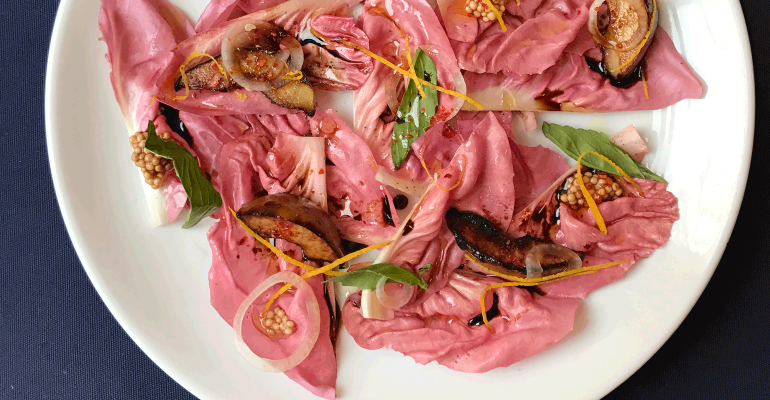 The Finch
Chef and owner Gabe McMackin of The Finch said the Radicchio del Veneto salad includes Castlefranco lettuce and a few other varieties to add flavor and texture in addition to color.
Food & Drink>Food Trends

When menus start turning greener, boasting more salads and leafy sides, it's a sure sign that spring is upon us. This year, however, spring menus are turning a new color: pink.

Among restaurants showcasing pink menu creations on Instagram are The Finch, a seasonal American restaurant in Brooklyn, N.Y., which crafted a pink salad made with radicchio del Veneto, roasted Seckel pears, pine nuts, rosemary and cippolini. King, a French and Italian restaurant in New York City, offered a salad of pink radicchio and ricotta cheese.

A host of leafy greens in various shades of pink and red are popping up on menus. According to Datassential MenuTrends, other quickly growing rose-hued leaves include red leaf lettuce and red cabbage.

In addition to being pretty, they’re also healthy.

“Leafy greens and pink lettuces have plenty of health benefits. They are great source of antioxidants and phytonutrients — healthy substances in plants, with health benefits,” said Amy von Sydow Green, a Philadelphia-based dietitian and restaurant nutrition consultant. “Not only are brightly colored leaves healthy, but they also make for beautiful plating and more Instagrammable meals.”

Health benefits and adding a pop of color on the plate inspired Jose Guerrero, executive chef of ViewHouse Eatery, Bar and Rooftop in Denver, to replace the monochromatic leafy greens in his Wasabi and Sweet Garlic Chicken Salad with a new blend featuring lettuces in various shades of red.

“Visualizing the color pop it would add to our new spring dishes, not to mention the health benefits that become top of mind with the seasons’ change, ultimately led to the decision to incorporate red lettuce into our blend,” Guerrero said. Three types of chicory, also known as radicchio, and frisée with tarragon and chives alongside fried-chicken at Michael’s Santa Monica.

At Michael’s Santa Monica, chef Miles Thompson visits the nearby Santa Monica Farmers Market to source the three types of chicory, also known as radicchio, and frisée that he dresses with tarragon and chives and serves with chicken.

"Our young roast chicken is brined, aged, roasted and deep-fried — between the brine (that is sweet) and the salty, crispy skin, we wanted to create an accompanying salad that incorporated some bitterness, so we went with different varieties of chicory,” Thompson said.

While pink might soon be the new kale, the latter is still a star leafy green, with 18 percent of restaurants specifying it on menus, which includes 20-percent growth in the last year alone, according to Datassential. Lesser mended black kale is the base for a salad with ricotta salata, rubi grapes, golden raisins, pine nuts, and white balsamic vinaigrette at Ray’s and Stark Bar in Los Angeles.

“I use black kale due to its unique flavor and crunchy texture,” Darin said. “In the spring, we add nasturtium flowers from our onsite garden to this salad.”

“We use a baby mixture of kale so that it is not the typical kale salad,” Sasser said. “We continue to use it because it adds subtle tones of crunch and texture.”

Two ways of kale are on the menu at Saltyard in Atlanta. Kale salad has pickled shiitake mushrooms, red onion, feta and pecan vinaigrette, and flash-fried kale chips are made with agrodolce and pecans.

“I use it because I think it’s a great texture for a salad dish, especially when it’s julienned and paired with other crunchy and crisp elements like radishes, apples and fried chickpeas,” said Saltyard executive chef Nick Leahy. “By using kale, you end up with a very texturally complex and interesting salad that you can’t get with simple, soft lettuces.”