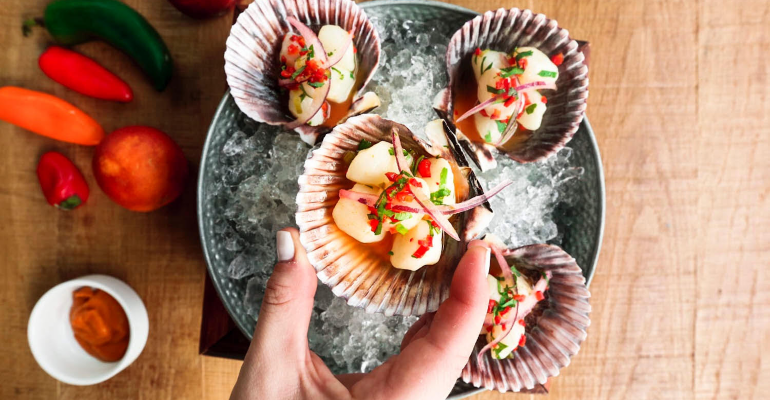 Ceviche — the Mexican and South American dish of chilled, citrus-cured seafood — typically shows up on restaurant menus during the warmer months of spring and summer, but many chefs now serve the dish year-round.

“Most of our diners enjoy starting their meal with a ceviche,” said Faiz Ally, chef de cuisine at Del Campo in Washington, D.C., where ceviche has been a year-round offering since the restaurant opened in 2013. “It’s light, refreshing and a great way for us to introduce the flavors of the foods to follow.”

Ally foreshadows the heartier fare to come later in the meal at this South American steakhouse by grilling and charring some of the garnishes and smoking some of the sauces in his ceviche offerings.

“Throughout the meal, these same flavor profiles are layered in all the dishes, rounding out the full Del Campo experience,” he said.

“Ceviche is really a celebration of the fish,” Ally said. “Its components serve to highlight the quality and freshness of the fish, but it’s always interesting and challenging to transform ingredients to highlight that flavor without overpowering it.” Ceviche is also on the menu year-round at Geraldine’s in Austin, Texas, in part because the seasons in Texas are either hot or cool — not cold — and in part because executive chef Stephen Bonin is a huge fan.

“Ceviche is one of my favorite applications of seafood,” Bonin said.

His newest ceviche is made with cobia, ruby red grapefruit, avocado, housemade spicy salsa toreado and lime juice, and is served with fried chicken skin, instead of traditional tortilla chips. Served two ways, either directly on a plate or inside a crispy taro root taco shell, Bonin said the dish regularly sells out.

For Jorge Rivas, chef at The Mar Vista in Los Angeles, serving ceviche all year long isn’t about pushing boundaries. Instead, Rivas said he’s “looking to have happy guests while exposing them to flavor profiles they’ve never experienced.” Long inspired by Peruvian ceviche as a whole, Rivas pairs sweet and creamy Peruvian bay scallop with aji amarillo, a Peruvian chile which he describes having “a fruity flavor and hints of mango, with just the right amount of heat to balance out but not overcome the flavor of the scallop.”

Anthony Lamas, chef at Seviche, a Latin-fusion restaurant in Louisville, Ky., credited Americans’ increased acceptance of raw ingredients for the trend of ceviche on menus.

“Ceviche is the Latin answer to sushi and sashimi,” Lamas said. “These types of ceviches are quickly becoming our best sellers, whereas years ago people were a bit less adventurous with raw applications.”

Among the half dozen or so items on the “seviche/ceviche/cebiche” section of Seviche’s menu are popular dishes such as Pacific halibut tiradito, a Peruvian-style ceviche made with raw halibut marinated in citrus and aji rocoto — a Peruvian chile common in ceviche — and sesame seeds and topped with radish; and the Tuna Old Fashioned, which is made by marinating raw tuna in Bluegrass soy, Kentucky bourbon, orange, sesame, ginger, yuzu and pineapple.

“Another reason why I think ceviche is trending is that the health aspect of ceviche is appealing,” Lamas said.  “It is rare to get so much flavor out of something that is virtually fat free.”