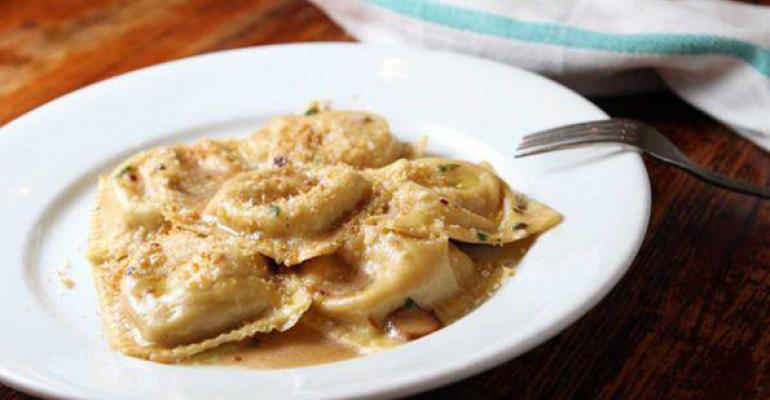 <p>Cauliflower Ravioli is one way The Cookery pushes boundaries in its vegetarian offerings.</p>
Food & Drink>Food Trends

Inspired by a thriving vegan/vegan-curious community, chef/owner Todd Gray of Equinox in Washington DC has invited selected District chefs to participate in his Vegan Smackdown Challenge. Since May, participating chefs have been providing one of their signature meaty dishes for Gray to reimagine as a vegan dish.

Todd Gray and his wife/business partner Ellen Kassoff Gray offer a vegan tasting menu and vegan Sunday brunch menu in addition to their more traditional menus at Equinox. Kassoff-Gray says she has seen a 250 percent increase in the popularity of vegan dining since they introduced their vegan brunch in 2004 at their former café, Muse, in the Corcoran Gallery of Art. “We spent a lot of time just talking to people and finding out why they were there. Some were actually vegetarian or vegan, but others were their non-vegan spouses or people who were health- or environmentally conscious and wanted to try it out.”

As chef José Andrés said when Beefsteak—named for the tomato variety, not the meat—opened in Washington DC, "It's not about being vegan or vegetarian, but about enjoying vegetables and making food that is wholesome, amazing, affordable and accessible to the many." The fast casual menu features bowls with grains and vegetables, plus proteins of choice. Favorites include the Kimchi-wa ($7.99) made with rice, corn, carrot, cabbage, edamame, bok choy and roasted garlic yogurt sauce, topped with scallions, toasted sesame seeds, corn nuts, kimchi and soy ginger dressing. For an additional $1.59, a poached egg can be added.

When The Cookery opened in Dobbs Ferry, NY, it became known for offering whole pig dinners. But Chef David DiBari’s vegetable offerings also push boundaries. For instance, dinner pasta choices include Cauliflower Ravioli ($17) with lemon brown butter, chili and Parmigiano. The cauliflower-based filling is complemented by a sauce that features butter, chili flakes, garlic slivers and Parmigiano Reggiano. The dish is garnished with breadcrumbs and a drizzle of lemon olive oil. At his restaurant The Parlor, also in Dobbs Ferry, appetizers include sautéed Brussels Sprouts ($9) Glazed with Honey, Sriracha and Rice Krispies.

In L.A. the Provençal bakery menu at Pitchoun features European-style pastries, soups, salads and sandwiches, including meaty classics such as the Croque-Monsieur, and a French Hot Dog with Dijon mustard and puff pastry. It also includes a Vegetable Tartine ($11.35), and salads such as Vegan Carpaccio ($8.90) with a selection of seasonal vegetables, lemon and olive oil.

Chef Nicole Pederson of Found Kitchen and Social House in Evanston, IL, is offering locally sourced summer salads on her flexitarian menu that spotlights vegetables and grains, along with select cuts of meat. Salads include Kale and Swiss Chard with Green Goddess Vinaigrette, Fresh Peas and Flax Cracker ($12 at lunch). On the dinner menu, Indiana Shrimp and Spinach Salad with Spicy Mushroom Larb and Toasted Rice ($18) features Chef Pederson’s mushroom version of the traditional Laotian larb made with spicy ground beef or chicken.