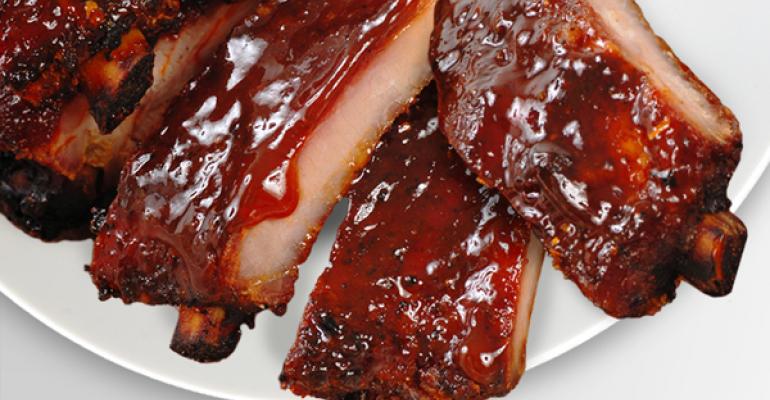 Coq au vin, champagne vinaigrette, beer-battered fish & chips—chefs have long relied on alcoholic beverages as key flavor components of popular dishes. They still do, but now a broader range of restaurant industry players—suppliers, distributors, multiunit chains—have gotten on board with the concept and they’re using high-profile brands to do it. Their strategy: tap into consumer interest in craft cocktails and artisan beers to help sell more food.

These operations and a few others like them have had long-term success with these booze-infused dishes. Now the idea seems poised to go mainstream. Get a load of the companies who want to take it there, using well-known craft and artisan brands of alcoholic beverages to make it work.

At the manufacturer level, Kansas City-based pork supplier Farmland has teamed up with local craft beer-maker Boulevard Brewery to produce a pair of seasonal bratwursts, Boulevard Brats. The first one, made with Boulevard’s KC Pils, is available now. It will be replaced this fall with a version flavored with Bob’s ’47 Oktoberfest. The two companies first partnered last year, using two other beers, Boulevard Pale Ale and Unfiltered Wheat, and have expanded the line for 2014. Look for sausage/craft brew combinations from other makers soon.

Want to tap into the brand power of craft beer maker Boston Beer Company’s Sam Adams? The company is giving away its beer batter recipe for fish & chips, which is easily adaptable to making onion rings or other deep-fried items. The recipe isn’t complicated: “equal parts flour and cornstarch, a pinch of baking powder and some Sam Adams Boston Lager or Sam Adams Light to thicken.” A fish & chips item made this way is already on the menu at chains like Mimi’s Cafe, Joe’s Crab Shack and Coco’s Bakery Restaurant. Your restaurant could be next.

Surprisingly, even a large foodservice distributor is getting into this part of the market. Performance Food Group, the country’s third-largest distributor, now sells Guinness Bold Entrees, a line of beer-infused foods. The products are produced in partnership with Guinness and chef Todd Davies. “We’re embracing the beer trend in America through these innovative, beer-infused entrées inspired by traditional recipes and flavor,” says PFG’s Fred Sanelli. The product line includes braised corn beef, braised beef chili with beans, braised pot roast, braised St, Louis ribs and braised tri tip. PFG says the items are fully cooked in “sous-vide manner and are easily prepared in house without a trained chef.”

Does the inclusion of Guinness do anything more than add branding power to these items? “Cooking with beer—and Guinness in particular—provides a tremendous depth of flavor for cooking, so much more than any other alcohol or wine can offer,” says Davies. “Guinness is a great tool for adding a hint of nutty, chocolate and roasted flavors that lend sophistication and elevate a menu.”

Maybe that’s why a couple of big chains have added new alcohol beverage-infused items to their menus. Dave & Buster’s has already introduced a pair of items that feature the flavors of a premium handcrafted bourbon. Customers find them on the Maker’s Mark Grill section of the menu. The offerings right now are the Maker’s Mark Smokehouse BBQ Burger and Maker’s Mark Wings.

Outback Steakhouse jumped on this trend big-time in late May, but took a different tack. It doesn’t specify the brand of moonshine used in its new menu items. The chain’s extensive Moonshine BBQ menu features such items as Sirloin with Moonshine BBQ Bacon Wrapped Shrimp, Moonshine BBQ Ribs, Moonshine BBQ Wood-fire Grilled Wings, a Moonshine BBQ Combo Platter, a Double Moonshine Burger and even a Moonshine BBQ Chopped Salad. But there is a branding element to its moonshine cocktails included a Huckleberry Hooch and Watermelon Hunch Punch made with Ole Smoky Blackberry Moonshine and the Just Peachee, which featured Georgia Moon Peach Moonshine.

“Bold flavors define Outback, and you can’t get much bolder than authentic moonshine,” says John Schaufelberger, Outback’s chief marketing officer. “We’re taking moonshine from the mason jar to the menu and are excited for all of our guests to get a taste.”

If you’re looking to add excitement to your menu or to put a new spin on some of your traditional offerings, it might be smart to follow the lead of all these restaurant industry players. They’re on the branded alcoholic beverage bandwagon already, but there’s room for other operators, too.

Catchy condiments a hallmark of Plan Check Kitchen
May 15, 2014