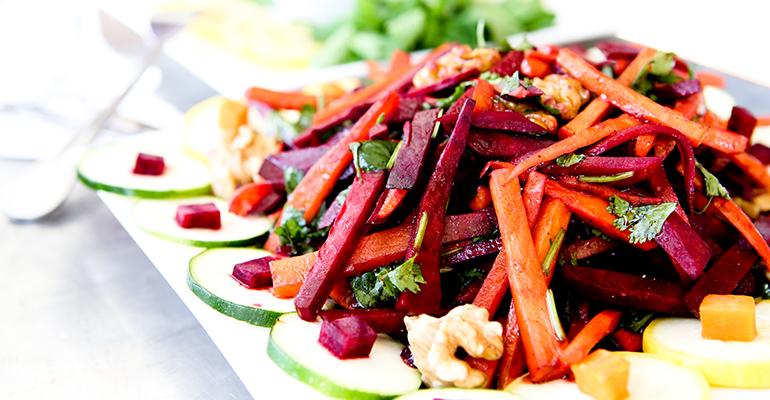 Beets come out from underground

The earthy, rootsy notes of beets speak to winter’s slumber and spring’s reawakening.

These chefs are coaxing the delicious secrets from flavors born in dirt.

Showing an appreciation for root vegetables in their raw state, this dish (pictured above) combines raw carrots and beets in a dish the crunch factor from walnuts and a bright jolt to contrast the earthiness with cilantro and a housemade pomegranate vinaigrette. Sassool is a place that celebrates roots in the ancestral form as well as the vegetable. The restaurant is the nickname of owner Mounir Saleh’s mother, Cecilia. The family fled Lebanon during the civil war in 1976 and started a pita bread bakery that led to Sassool, which now has two locations in Raleigh and Cary, NC. Ousia, which just opened on Manhattan’s West Side, is the latest from the Livanos Restaurant Group (Oceana, Molyvos, Moderne Barn and City Limits Diner). This cannellini beet spread is leading off the new menu of shareable small plates that can be described as Mediterranean with a strong Greek focus. This eye-catching spread with the in-your-face color and silky texture is flavored mainly with sesame seeds, keeping things deceptively simple. This salad blends raw and roasted beets with pink D’Avignon radish for an unexpected effect. Goat cheese crema, pistachios and pesto made from local herbs offer counterpoints from several flavorful directions. Other root vegetables on the menu of The Flying Squirrel include a root-veggie platter with salt-baked turnips, roasted radishes, sweet potato puree, parsnip chips and a rich port wine reduction to tie it all together.