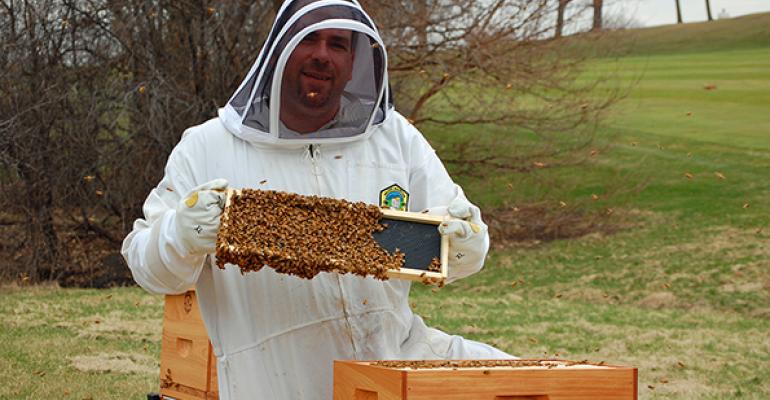 Sean Patrick Curry was working as an executive sous chef at the Chicago Marriott Downtown when he decided he wanted to do something about the honey bee problem, wherein, starting back in ’06, entire bee colonies started mysteriously dying off at an alarming rate. Bees, of course, are an essential link in the food chain, and Curry wanted to do something about it. Call it an existential crisis or just plain worry about where his kids’ food would come from, Curry wanted to be part of the solution. We talked with Curry, currently executive chef at the Hilton Chicago/Oak Brook Hills Resort & Conference Center near Chicago about bees, honey and how a city kid from Philly became a beekeeping chef.

Q: Why the interest in bees?

I got interested in farm-to-table when I was an executive sous chef at the Marriott on Michigan Avenue, back in 2008. It was a typical hotel restaurant, but when the executive chef and I talked about what we wanted, conceptually, we talked about buying things local, which wasn’t really trendy then; but we wanted to do something that made us feel good. Being a chef should mean more than just having good ingredients. We wanted a higher purpose. I was sourcing out local farms and I got really interested in bees—mostly because of the collapse of bee colonies and the questions about what was killing them off. Bees pollinate a third of the world’s food supply. What happens if we can’t keep up with the demand for food?

Q: How did you get started in beekeeping?

Right before the Chicago restaurant opened, I was promoted to the Baltimore Renaissance on the Inner Harbor. I had a rooftop garden, and I wanted to get some hives and start producing our own honey, but management wouldn’t approve it. They were concerned about the safety and the busy Inner Harbor. I came home from work wishing I had bigger garden and beehive. I had daughter and son at this point and I wanted to be doing something at work that was important. So when I was offered another Marriott job in the Midwest (Marriott Naperville, IL), the first thing I asked was if I could have beehives on the property and they said yes. When I was offered the job here at Oak Brook, they were excited to have me start a honeybee program here as well.

The bees help market themselves and prove their value above what they already do for the world’s food supply. We invested about $3,500 for nine hives. Honey production incorporates well with our modern farm cuisine, farm-to-fork concept that focuses on environmentally-friendly practices and sustainability. We present beautifully plated, contemporary dishes made from food we either grow ourselves or buy locally.

The bees are really productive. By a hive’s second year, we harvest about 100 to 140 pounds of honey from each hive. (About a third of each hive’s honey is left for the bees’ winter needs) We harvest it a couple of times a year. We utilize the honey, and also the wax and pollen in our food and beverage program. I use it whenever I can substitute it for sugar: our signature teas and cocktails, in barbecue sauce and a signature wedding cake. It’s the key ingredient in our chevre, honey and bacon flatbread, honey cinnamon scones, honey vanilla cupcakes and homemade honey ice cream. When I started plating our local cheese boards with some of the honeycomb, sales went through the roof.

Production has increased because we keep splitting the hives when they get too crowded. We have 100,000 bees now and that could increase to a million by the end of summer. Soon, we will have our own candles produced from the beeswax in our hives.

It’s actually not that difficult to raise bees. This is my third hotel with beehives, and the hardest part has been convincing ownership to buy into it. The other thing is weather setbacks. This year has been rainy, and the bees stay in the hive and start eating the honey they’ve stored. The more rain, the more it sets back honey production. Logistically, it’s not as difficult as people think. Rooftops are a great place for independent restaurants to keep beehives. You don’t need much space. For us, with a large property, it made sense to keep them out by the pond and the garden.

Q: What about safety?

I’ve only been stung three times. People confuse yellow jackets and honeybees. Yellow jackets are the thugs—the aggressive ones who will come after your food and sting you. Honeybees are very picky and only care about pollen and nectar and water and defending their home. They’ll only sting if the home is threatened; and even then, only those whose job it is to guard the hive entrance will sting. Their communities are so interesting because they all have a job and they know what their job is. It sounds ridiculous to call an insect intelligent, but they are. So wherever you put your hive, make it hard for people to stumble upon and put up signage so people know they’re there. Don’t scare people. Our signs say “Honeybees hard at work; please do not disturb,” and that’s enough. Guests aren’t afraid; they’re actually fascinated.

Q: Any advice for aspiring beekeepers?

It’s funny that people ask me that. As a kid growing up in Philadelphia I never would have believed anyone who told me I’d be a beekeeper. But here I am.

I took a class at a local farm, but truthfully, you can learn everything you need to know on your own. YouTube is a great resource. Most park districts can get you to the right people. I bought the bees from a beer and winemaking supply business in Chicago. The owner gets the bees from a company that travels throughout the U.S. and uses his bees to pollinate certain areas. Our bees came from California and helped pollinate a lot of the almond trees out there.

Q: What do your kids think of your job?

You mean my “sous chefs?” They’re really into it. What we’re doing with the bees is not the biggest thing in the world but it’s something I can control and do to make the world less scary. There’s more to life than work and fun; I hope they’re learning to contribute what they can.