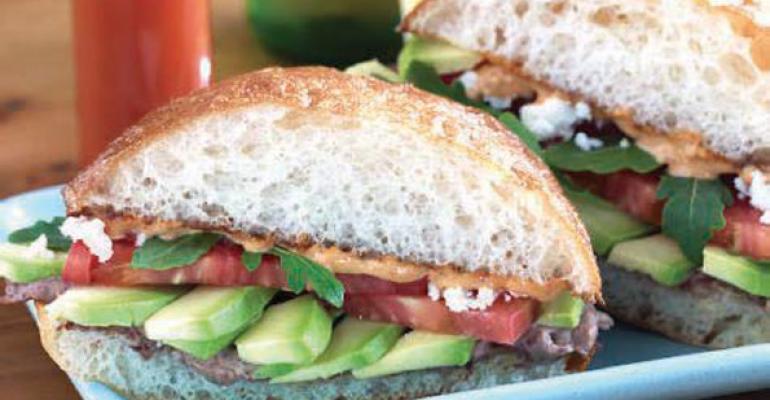 The ABCs of customizing sandwiches

A is for Add-Ons: According to the 2012 Avocado Menu Trak study, avocado was mentioned on 32.9 percent of menus in 2012, an increase of 11.5 percent over 2009. The most common uses for avocados are on sandwiches. A fresh idea from La Condesa Napa Valley in St. Helena, CA is executive chef Chris Mortenson’s Avocado Torta with black bean puree, heirloom tomato, queso fresco and chipotle mayonnaise.

B is for Burger Enhance-ment: According to Technomic’s 2011 Burger Consumer Trend Report, more than one-third of consumers will pay more than $6 for a premium burger. Signature recipes, burger of the week promotions and other specialties create buzz. At the recent 2013 World Burger Championship in Las Vegas, head cook Wade Fortin accepted the $10,000 prize for Second City Smoke’s winning El Toro—a porcini butter-stuffed rib-eye steak cheeseburger.

Customers just can't get enough of casually classic sandwiches—unless they’re opting for ethnic variations or creative spins on traditional combos. According to Technomic’s 2102 Sandwich Consumer Trend Report, 43 percent of consumers eat at least four sandwiches a week, and half the sandwiches they eat are purchased away from home. We offer ideas for intriguing tweaks, everything from breads to proteins and condiments, that can bring customers back for more. Consider the variations on aioli that several chefs have shared with us: spicy aioli, Gorgonzola aioli and smoked paprika aioli. Elsewhere in this section you’ll find recipes for the Tuscan Steak Sandwich on a Pretzel Hoagie from Taverna Aventine in San Francisco, and the Potato-Stuffed One-Pound Burger from Hash House a Go Go in San Diego.