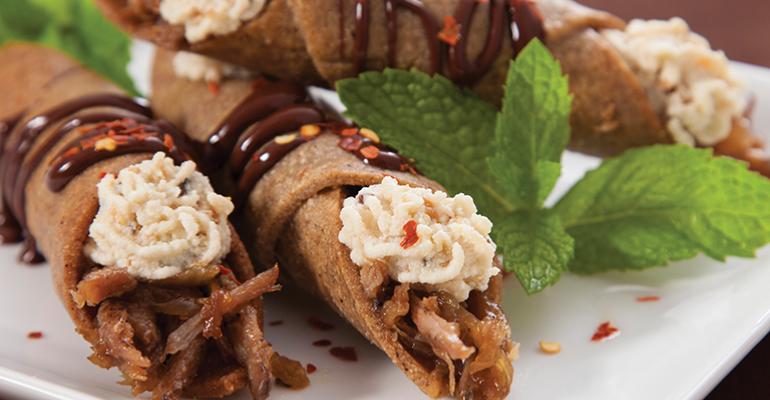 For cannoli shells: In a food processor, add both flours, sugar, duck fat, cloves, cinnamon and salt. Pulse until mixture resembles breadcrumbs. Add egg and wine. Mix until dough is smooth and pliable, adding additional wine as needed to gain proper, smooth consistency. Wrap dough in plastic wrap and refrigerate for at least one hour.

When dough is sufficiently chilled, remove from refrigerator; roll out on lightly floured surface to a thickness of approximately 1/8th of an inch into a rectangular shape. Cut into squares for cannoli, four for large cannoli, six for smaller.
Fill a large, heavy-bottomed pot with canola oil a third of the way up; heat to 350°F on the stovetop.

Starting with one corner, wrap a square of dough around the cannoli mold, pressing to seal edges where they overlap.

With tongs, plunge dough and mold into oil, frying until golden brown.  Remove from oil, drain on cooling rack.  Repeat with remaining squares.

For chocolate sauce: Melt chocolate in a double boiler; add cayenne and salt. When mixture is melting, test viscosity and add heavy cream as needed to thin for drizzling.

Arrange 3 to 4 cannoli on platter or plates; drizzle lightly with chocolate sauce and garnish with mint leaves and chili flakes.