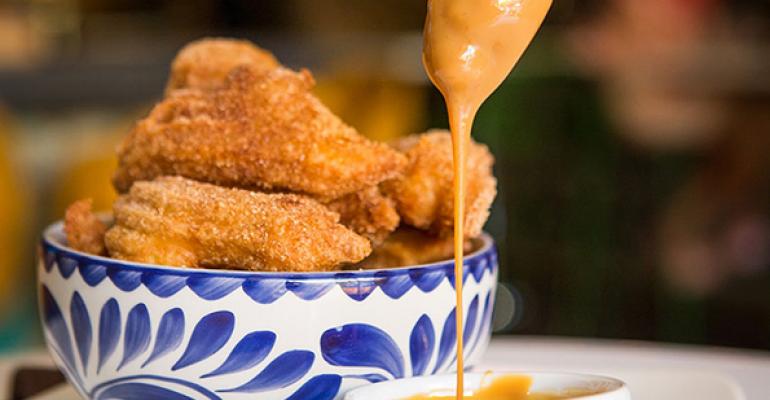 Never underestimate the nostalgia factor of the fried pastries and midway treats your customers indulged in at summer carnivals and fairs when they were children.  Several restaurants are tapping into this fondness for childhood favorites.

At State Fare Bar & Kitchen at the Ritz-Carlton Rancho Mirage, CA, for instance, desserts include the Funnel Cake ($9), dusted with powdered sugar and topped with house-made kumquat jam and whipped cream, served with a side of Nutella.

Powder Beignet Bites ($12) are among the dessert offerings at M Bistro in the Ritz-Carlton New Orleans. The beignets are served with a trio of sauces—chocolate, vanilla and caramel. Coffee and Donuts are on the menu at Avant Rancho Bernardo Inn in California. The doughnuts ($12) are dusted with cinnamon and sugar, paired with house-made Baileys ice cream and topped with espresso foam. At Don Chido in San Diego, the Churros Y Abuelitos Chocolate is a comfort food carnival-inspired dessert ($6), tossed with cinnamon and sugar. Don Chido’s lighter version of churros are tempura-battered and dried, and come with a warm Abuelitos chocolate dipping sauce or a seasonal dulce de leche sauce.