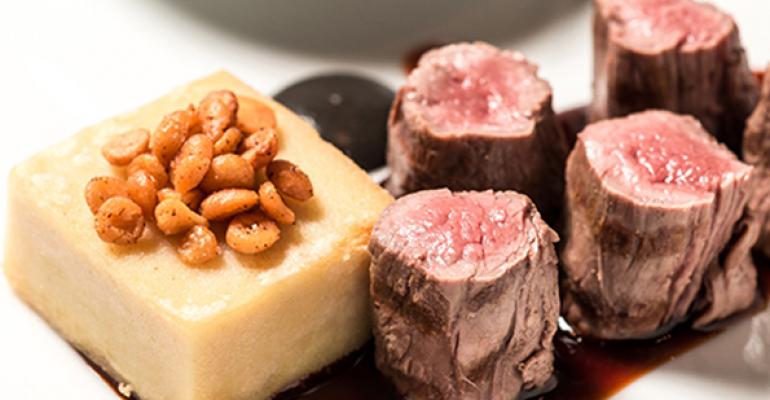 Shank Roulade:
meat from above, picked
garlic from above, mashed
tomato bits, if any, from above
to taste, salt and pepper
3 Tbsp. softened butter
grated zest of 1 lemon

For tagine broth: Sweat the onions and garlic in olive oil until translucent. Season the lamb shanks with salt and pepper and add to the pot. Add cumin and paprika; stir. Add white wine with saffron. Bring to a boil and reduce by three-quarters. Add tomatoes, cinnamon stick, bay leaf, parsley and cilantro; cover with chicken stock. Bring to a boil and skim, then turn to a simmer and cook for 3½ hours until meat is falling from the bone. Fish out the shanks, bay leaf, cinnamon, cilantro and parsley; season remaining broth to taste with salt and pepper.

For roulades: Remove lamb meat from bones and mix with any large chunks of garlic or tomato from broth, plus butter. Season to taste with salt and pepper. Roll into a thin sausage in plastic wrap and tightly tie the ends. Refrigerate until set.

For panisse: Mix all ingredients in a saucepot and bring to a boil. Cook, stirring, until a thick paste has formed. Spread into a half pan greased with olive oil. Chill. Cut into squares and dust with quick-mixing flour before sautéing.

For merguez meatballs: Make sure meat is cold. Mix with remaining ingredients. Taste and adjust seasonings, then roll into mini meatballs and cook in a little of the tagine broth.

For black sesame sauce: Mix all ingredients together. Taste, adjust seasoning, then place into a squeeze bottle.

For lamb tenderloins: Marinate lamb no more than 6 hours in advance. Mix lemon juice, cumin, olive oil and garlic together, then with the cleaned tenderloins.

For harissa: Soak the chiles in hot water until soft, then puree with remaining ingredients in a blender, adding the oil a little at a time. Taste and adjust seasonings.

For chana dal: Boil until soft but not falling apart, then cool in one layer on a sheet tray. Allow to dry well. Deep-fry at 350°F, then toss with salt and harissa powder.

To serve: Season tenderloins with salt and pepper and grill to desired temperature. Saute the panisse until browned on both sides. Reheat tagine broth, roulade and meatballs and place in the mini tagine. Garnish with reheated black chickpeas and blanched mini carrots and turnips. Serve tenderloins on the other side of the plate, on a spoonful of red wine sauce, dotted with black sesame sauce and harissa, and flanked by the panisse topped with crispy chana dal.