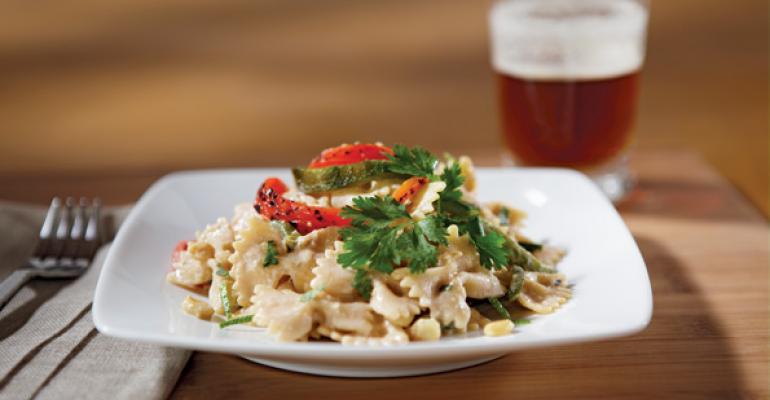 Cook pasta for half the time indicated on package. Drain pasta and drizzle with some olive oil to prevent from sticking. Place pasta flat on sheet trays or hotel pans and cool in a blast chiller or walk-in cooler. Store in zip lock bags or sealed plastic container; refrigerate and  use within several hours.

Combine cream, paprika and 14 cups of the corn in a large pot. Season with salt and pepper; bring to a simmer for 20 minutes. Using an immersion blender, puree mixture until smooth. Add cheese and whisk until melted. Let cool and refrigerate until needed.

Char the bell peppers and poblanos over an open flame until they are blackened. Put them in a bowl or container and cover to steam for 10 minutes. Peel off the blackened skins. Cut open the peppers and remove seeds. Cut peppers into 2” strips.

In a large sauté pan, melt butter and sauté the onions, garlic and remaining 7 cups corn until lightly caramelized. Add peppers and heat through. Season with salt and pepper. Set aside.

For each serving, to order: Warm about ¾ cup corn sauce in a pan. Reheat 1 cup pasta in simmering water. Drain and add it to the sauce with some of the pepper mixture. Season with lime zest and juice and plat. Top with more pepper mixture and a sprinkle of cilantro.