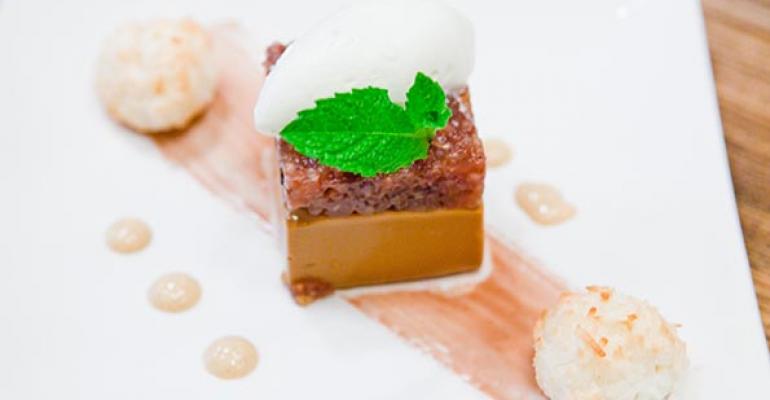 For filling: Preheat oven to 260°F. In a mixer, whip the cream cheese until soft and lumps no longer exist. Add sugar and incorporate entirely. Add eggs one at a time, then add heavy cream and vanilla extract. Mix these ingredients and place on sheet pan no thicker than 1” high. Place into oven and allow to bake for 25 minutes. Test mixture with a wooden toothpick or long skewer for doneness. Cook longer if toothpick or skewer does not come out clean. When mixture is completely cooked, allow to cool before placing into the cinnamon short dough. Reserve in refrigerator.

For Cinnamon Short Dough: Preheat oven to 350°F. In a mixer, whip butter and sugar. Add flour and cinnamon. Mix well but do not overmix dough. Set dough aside and allow to rest for 45 to 60 minutes in warm environment. Place dough on sheet pan, then place in oven. Bake for 15 minutes or until browned. Reserve and allow to cool prior to placing cooked cheesecake mixture on top.