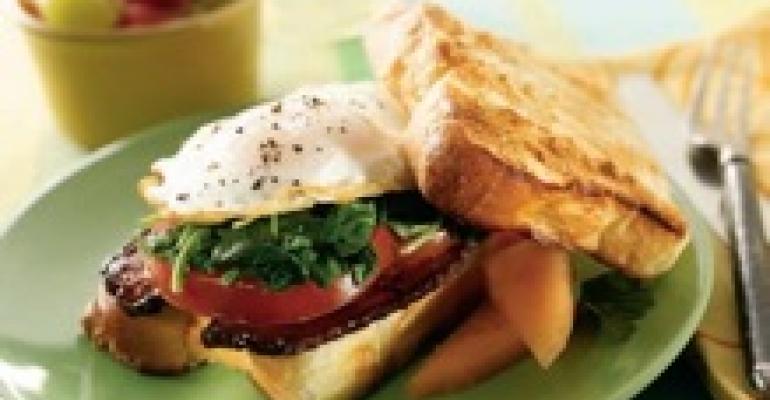 Even the most beloved morning menu item can benefit from an update now and then. If your customers have been embracing tradition but not trying anything new, you'll find several ideas on this month's recipe pages to whet their appetites. Blackbird restaurant in Chicago offers chef de cuisine Mike Sheerin's take on a classic bagel with his Smoked Sturgeon with Nori Cream Cheese on a Salt Bagel. Other breakfast sandwich ideas include a Stuffed French Toast Panini, a Breakfast Panini with Georgia Pecans, Cheddar and Sausage and the BELT (Bacon, Egg, Lettuce and Tomato) combo from South Water Kitchen in Chicago.

Fans of omelets and frittatas will take note of items such as the Famous Potato Omelet from The Kneadery Restaurant in Ketchum, ID, as well as the

Souffle Omelet with Balsamic Strawberries and the Pear and Swiss Breakfast Frittata. Crepe and pancake lovers may be encouraged to try something new, such as the Turkey Dill Crepes from First Watch Restaurant, or the Mango Pineapple-Sauced Pancakes.

Also, check out the Apple, Goat Cheese and Potato Cakes from chef Jeffrey Dunham of The Grove Grill in Memphis.

The Breakfast Beat
Whatever the personality and style of your restaurant, there's a breakfast attitude that's right for you. According to Technomic Information Services' ConcepTrac™, breakfast offers full-service restaurants an opportunity to build their business. The following ideas provide examples of various breakfast styles.

• Po' Boys Creole Cafe, a Florida-based franchised restaurant chain with seven locations in Florida (including Gainesville, Tampa, Tallahassee, Brandon and Jacksonville), features a Creole-inspired 17-item Sunday bayou brunch menu. Among the top-sellers: Awesome Al's Shrimp Omelet and the Crabmeat Omelet a la Creole. Says co-founder Charlie Youngs, "Brunch is a very lucrative meal period which most restaurants don't even bother with." The brunch runs from 10 a.m. until 2 p.m. on Sundays. Menu item prices range from $6 to $8.

• Du-par's, a Los Angeles coffee shop founded in 1938 at The Original Farmers Market, attributes the secrets of its success to its pancake recipe. The restaurant reopened in January after a two-year renovation. Du-Pars operates 24 hours a day. The pancake recipe remains unchanged since 1938 and is kept locked in a safe. The restaurant now squeezes its own orange juice and hand-peels and cuts the hash browns.

• Peacock Alley in New York's Waldorf-Astoria hotel reintroduced its weekly brunch last Sepetmber. Brunch is offered from 10:30 a.m. until 2:30 p.m. every Sunday, and is priced at $75 per person ($35 for children under 12). Guests can choose from 180 menu offerings at 16 specialized stations localed in the restaurant and hotel lobby. The Eggs Benedict station, for instance, features 10 versions, with several types of Hollandaise sauce.

• Denny's last month introduced three new breakfasts as part of its promise of abundant value. The meaty specialties are all priced at $5.99 and include the Mega Meat Lover's Plate, the Mega French Toast Slam® and the Meat Lover's Omelette. The new breakfasts will be available through May 21.