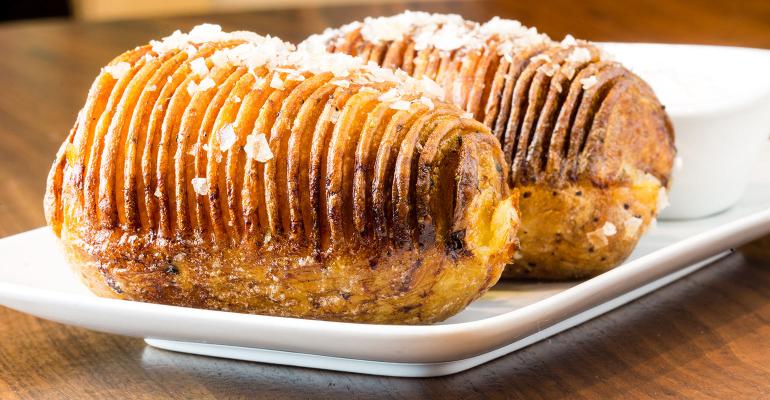 Stepping It Up With Spuds

Down to earth, or out-of-this-world, potatoes bring a special versatility to the table

HASSELBACK POTATOES
Marc Lupino, executive chef, Steak 48, Houston, Chicago
Photo: Francis Son
Hasselback potatoes are a hot trend from the 1700s that has the potential to turn heads at today’s table. At Steak 48, a modern-lux steakhouse with locations in Houston and Chicago, Yukon Gold potatoes (pictured above) are sliced almost all the way down into an accordion shape, then baked until they’re about 90 percent done. A quick dip in the fryer crisps up the individual slices of potato. Hasselbacks are showing up on menus across the country, and it’s no wonder: the genius Swedish invention is crispy and golden on the outside, creamy on the inside and simple to make. A splash of truffle butter and a pinch of smoked sea salt gild upgrade this root vegetable to the max. POTATO LO MEIN
Richard Landau, founder and head chef, Vedge, Philadelphia
Photo: Potatoes USA
“It looks like pasta and yet it’s potatoes,” explains Richard Landau, founder and head chef of Vedge restaurant in Philadelphia, a veggies-front-and-center kind of place. Landau and his wife, Kate Jacoby have also written a cookbook, “V Street: 100 Globe-Hopping Plates on the Cutting Edge of Vegetable Cooking.” For this gluten-free dish, Landau shaves potatoes into lo mein strands on a mandoline then blanches them until they’re translucent. A quick dive into a hot pan or wok with sesame soy sauce scallion and red chili sauce creates a sweet-salty-sour glaze. Landau calls this potato-noodle switch-up “playful.” And Instagrammable too. Customers’ “wheels start turning and then their phones start snapping,” he adds.

CAUSA JAR
Ricardo Zarate, chef, Rosaliné, West Hollywood
Photo: Carla Choy Photography
Start a conversation about potatoes, and it’s only a matter of time before someone brings up Peru. Between the many colorful varieties of potatoes grown for centuries there, to the refreshing ways Peruvians prepare potatoes, there’s a lot to talk about. The buzz with Peruvian potatoes in this country is happening right now in West Hollywood, at Chef Ricardo Zarate’s Rosaliné restaurant. The Causa Jar is on the small plates menu, a potato terrine of earthy-yet-dazzling colors and flavors to match: layers of eggplant, avocado and botija olive oil cozying up to silky potato mousse. POMME ROSTI
Kolby Carpenter, executive chef, Flying Squirrel Bar, Chattanooga, Tenn.
Carla Choy Photography
Your brunch customers are one of two things: “savory breakfast” people or “sweet breakfast” people, though “boozy breakfast” is also an option at Flying Squirrel Bar, a fun-centric hangout with a patio near a hip youth hostel. For the savory crowd, the true measure of a great menu item is the perfect hashbrowns. A tireless quest for hashbrown Shangri-la led Executive Chef Kolby Carpenter to create Pomme Rosti, a potato dish with an even rootsier flavor thanks to Carpenter’s addition of celery root. Also, “I found that shredding the potato really fine and rinsing out the starch is optimal,” he adds. “It’s a complex dish to prepare, but so humble and so honest in its flavors.”