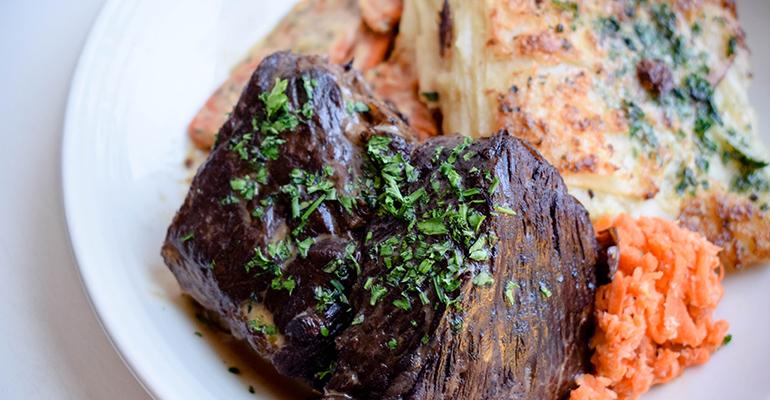 Cassoulet, Boeuf Bourguignon, daubes and pot-au-feu emerge on menus, along with pot roast

Cold weather months are prime time for comfort food favorites. In many restaurant kitchens, broiling takes a temporary back seat to braising, and chefs rev up their roasters to create dishes that warm and satisfy. Many of the hearty braises and stews they’re currently creating are French in origin and serve to introduce contemporary diners to culinary classics.

Cassoulet. A standard from the Languedoc region of France that starts with navy beans and a stewpot, cassoulet is getting lots of play. Henrietta Red in Nashville dishes up a version made with Tarbais beans along with braised pork, duck confit, garlic sausage and herbed breadcrumbs. The beans that are the star of the show here are authentic to the dish, hail from southwestern France and are considered the holy grail of bean-dom by cognoscenti of legumes. Grown to exacting standards and handpicked pod by pod, they receive the same cosseting as fine wine grapes. 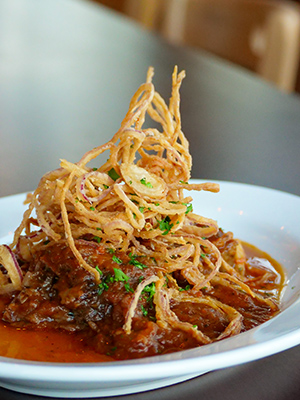 Image: The French daube at Lagarde in Atlanta is made with brisket and topped with crispy onions.

Beans are also a key feature at The Copper Onion in downtown Salt Lake City, where the seasonal Duck Confit Cassoulet features Zürsun beans, an heirloom variety from Idaho, along with andouille sausage and rye breadcrumbs. Bacon is a differentiator at Bistro Jeanty in Yountville, Calif., where the dish includes the expected ingredients, but gets an unexpected tweak from the addition of apple-smoked bacon.

Daube. A tradition in Provence, daube marries meat, wine and vegetables and requires three days to prepare: One day to marinate, one day to cook and one day to rest. On the fourth day, diners dig in. At Lagarde in Atlanta, a newly opened American eatery with roots in New Orleans, they dig into a tasty daube made from a family recipe that uses beef brisket and is topped with crispy onions that provide a nice finishing crunch.

Some purists argue that daube is actually the less refined country cousin of Boeuf Bourguignon, or Burgundy beef, which benefits from the addition of the titular wine along with carrots, mushrooms and pearl onions. Bar Lyon in Boston respects convention with a by-the-book version consisting of red-wine-braised beef along with house-made bacon and whipped Yukon Gold potatoes. At memorably named, newly opened Once Upon a Time in France, a bistro located in sizzling hot East Nashville, the chef plates his classic rendition with a side of linguine.

Pot-au-Feu. Another winter warmer, this one delivers an extra boost, since the cooking broth is typically served separately as a soup course to accompany the stewed meat-and-vegetables main dish. These elements are served together at By George in Atlanta, and they are accented with horseradish and curly parsley. Townsend in Philadelphia garnered rave reviews for its Rabbit Pot-au-Feu, in which rabbit loin roulade combined with rabbit loin, potatoes, carrots and thyme.

A recent New York Times review of trendy Four Horsemen in Brooklyn heaped praise on the “pot au feu traveling incognito.” Appearing on the menu as pot roast, the “elegant, restorative braise” is a modern interpretation that combines short ribs with red carrots and Japanese turnips in an opaque broth.

Pot roast. Of course, the United States has bragging rights to its own cozy stews, chief among which are pot roast and its alter-ego, beef stew. Pot roast was a familiar fixture on family menus in the last century, and as it has fallen from grace in home kitchens, a number of chains have stepped into the breech and kept the flame alive. Good examples include Culver’s perennially popular Beef Pot Roast Sandwich or Denny’s Pot Roast Melt sandwich and Slow-Cooked Pot Roast entrée.

A homey, homely example of Instagram-resistant brown food, the stick-to-your-ribs fare has also been feeling the love from independent restaurateurs of late. Fat Kat Slim’s in Nashville boasts throwback diner noshes, classic martinis and “the most bitchin’ bashes in town.” Patrons can fortify themselves for the bitchin’ bashes with Braised Porter Road Pot Roast made with beef from the eponymous local butchery. At Spoon & Stable in Minneapolis, Dorothy’s Pot Roast gets a distinctive and distinctly French treatment. The dish consists of Pommes Aligot (a version of cheesy mashed potatoes from southeastern France), mushroom confit and rosemary broth; diners seeking to up the decadence factor can add foie gras as a finish.