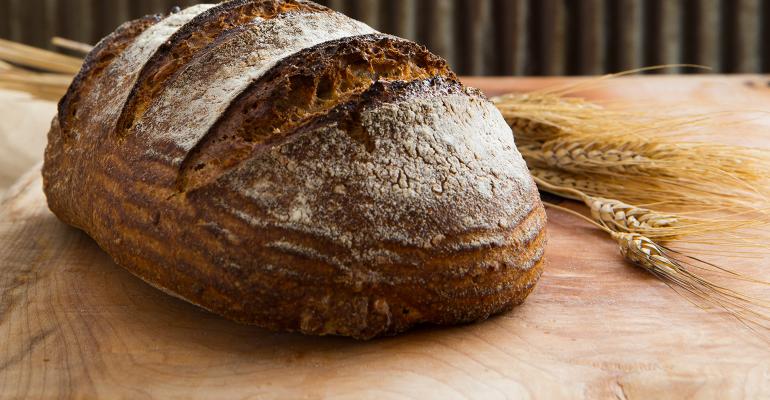 Photos by Hewn Bread
Each day, Hewn Bread’s Ellen King and her team of 18 employees churn out 300 to 500 loaves of bread, much of it bound for 31 restaurants in the Chicago area.
Food & Drink

When she opened Hewn Bread in Evanston, Ill., in 2013, Ellen King set out to make better bread the way Midwestern bakers did a century ago: hand-forged artisanal loaves made with seasonal ingredients sourced from small, local farmers.

But in the process of trying to source only the best ingredients for her bakery, King has grown into a leader in the growing movement to revive heritage wheat varieties, types of wheat that were grown throughout the U.S. before grain began to be hybridized for maximum yield and resistance to pests and diseases, a shift that starting around the 1940s. “For me, as a baker, I like working with different varieties,” said King, who is a classically trained chef with a passion for — and a master’s degree in — history. “The varieties have more diversity, are healthier for consumers, and sustainable for the environment.”

On any given day, Hewn turns out 300 to 500 hand-formed loaves made from 100-percent organic ingredients, naturally fermented without any preservatives, chemicals or additives and baked in a German oven with a stone hearth and steam injection designed to create the ideal crust.

Currently, about 15 to 20 percent of the grains being used at Hewn are heritage varieties. Whether heritage or not, 75 percent of all wheat used at Hewn is certified organic; the rest comes from farms using organic practices that are either too small to certify or are working toward becoming certified.

Among the heritage wheat varieties King is experimenting with are Turkey Red and Orleans for breads, and White Sonora for pastries.

King describes bread made with Turkey Red, for example, as “heartier and earthier” with a good amount of protein and less gluten than the more traditional mass-produced loaves.

She said her customers notice and prefer the “silkier taste, gentler taste” of bread made from the Orleans. The White Sonora has small yellow flecks that give a mild corn taste to the flour, which works well with pastries. In gluten-sensitive circles, a growing number of people say they are able to eat foods made with heritage wheats without experiencing their typical symptoms.

King had originally hoped to source most of her flour locally, but she couldn’t find enough local famers growing organic, or find the heritage varieties that were once so prevalent in the region. Instead she has had to scour the country for farmers willing to grow organically or to do the painstaking work of cultivating near-extinct varieties. Like a starter that is fed and maintained daily, King’s diligence to the cause has cultivated a culture of farmers, millers and distributors, both local and across the country, that now produce organic and heritage grains for Hewn.

“I believe it’s an obligation as a baker to be deeply concerned about how things are grown,” said King. “I’m in this because I’m passionate about it and I believe things should change about how we grow and buy our grain.”

King is indeed effecting change, however small, in the grain industry.

Most recently she began a partnership with Andy Hazzard of Hazzard Free Farm in Pecatonica, Ill., which was already providing some wheat for Hewn, to cultivate and rebuild the seed stock of Marquis, a now-rare variety of wheat that was grown throughout the Midwest in the early 1900s. King and Hazzard started in 2015 planting just a few pounds of seed, then harvested that for more seed, then planted again and harvested that for even more seed. If all goes well, King said this spring’s plantings will yield 3,000 pounds of seed that can then be shared with other farmers willing to grow it. Then King can have some of the wheat milled into flour before transforming it into loaves.

“To bring this to the masses we need to grow local,” said King. “I’m working from the ground up.”

In addition to selling her loaves from the retail location, Hewn supplies bread to 31 local restaurants in Chicago and the surrounding suburbs. “Restaurants that work with us have a passion for the ingredients they are cooking,” said King. “[It’s] restaurants that want a unique experience, and our bread is unique.”

As more unique varieties of wheat become more widely available, Kings said restaurants could find a bakery to partner with that can produce different flavors that could become the restaurant’s signature flour.

“That is one way restaurants can really support farmers and set themselves apart,” added King.

Trend watchers and food pundits are predicting heritage varieties will be the next big trend. But King doesn’t see it that way.

“I like to think this isn’t a trend. Bread has been with us. It’s the river that connects all of us,” she said. “I don’t think it’s going to take over, but I think it’s going to be enough of a movement to be impactful. It’s going to complement the wheat industry, also going to [make us] think about mass industrialization and why we have gluten sensitivity.”