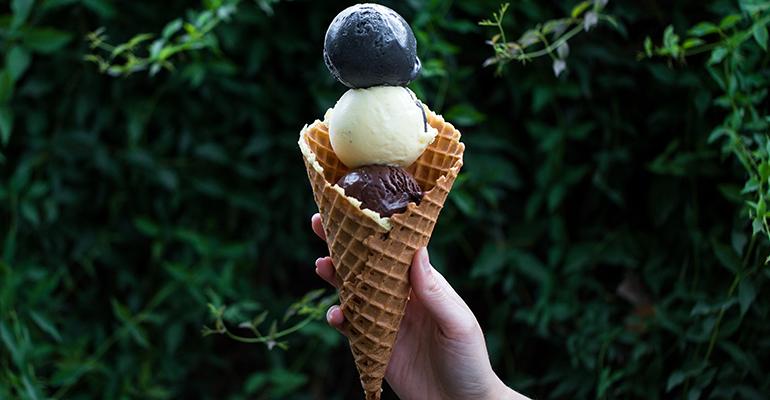 While trips to the ice cream parlor as a kid meant gobs of hot fudge and mountains of rainbow sprinkles, ice cream brands are increasingly turning their attention to a new demographic: ice cream-loving adults who want their scoop fix in a more sophisticated setting.

Over the past several years, boozy ice cream parlors or “barlors” as they’ve become known, have been popping up across the country, with a focus on serving whiskey and beer-infused sundaes and frozen cocktails. But ice cream shops don’t have to be barlors to market toward adult clientele: liquid nitrogen ice cream shops give the frozen treat more of a scientific spin, and many scoop shops have taken to serving up fancy flavors like cold brew coffee, Earl Gray tea and horchata.

Here are seven adult-centric ice cream shop concepts that are either totally thinking outside the box, expanding, or both.

Combining both liquid nitrogen ice cream/milkshakes with boozy flavors, the Ohio-based Buzzed Bull Creamery founded by CEO Colten Mounce, announced franchising in 2018 and just signed contracts for two new locations in Wilmington, N.C. and Atlanta in April and July, respectively, and plans to franchise across eight states in the future. 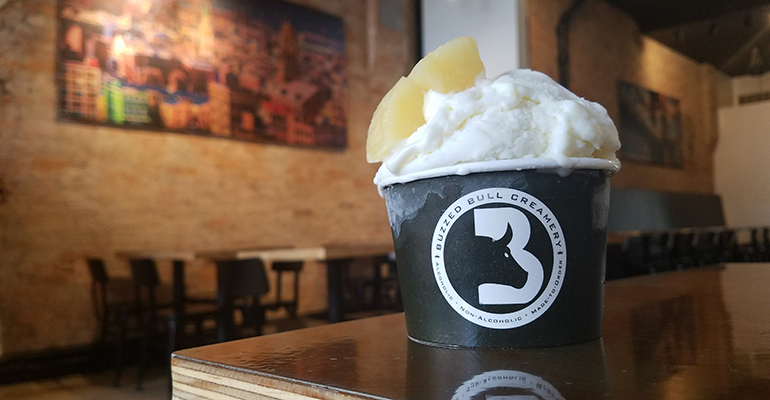 With boozy concoctions like hard-apple pie made with graham cracker and apple pie mix, and honey bourbon pecan made with honey, pecan, and whipped cream, customers 21 and over can customize their alcohol infusion starting at 5% alcohol by volume, or ABV, with options ranging from flavored vodkas to bourbon and moonshine. Buzzed Bull also offers create-your-own boozy liquid-nitrogen milkshakes, with the option to add candy toppings, sprinkles, and multiple additional alcohol shots.

The average check at Buzzed Bull Creamery is just over $12 and their target unit size is 1,500-square feet.

Ice cream made with liquid nitrogen is becoming increasingly popular across the country, both as shops and at catered events.

An ice cream-event performer has turned his liquid-nitrogen show into a brick-and-mortar concept in Los Angeles called SuperCool Creamery, which opened in late March, combining elements of theatricality and special effects to their made-to-order liquid nitrogen concoctions.

The liquid nitrogen is stored at -320 degrees Fahrenheit and reacts immediately when it is put in contact with anything warmer and causing a cloud of vapor or smoke. Once the nitrogen starts evaporating and freezing the ice cream mix it starts to create ice crystals and forms an ice cream texture.

Focusing on artistry and creative flavors, SuperCool rotates out a daily menu of 15 liquid nitrogen ice cream flavors for $5.80 per scoop or $7.99 for a double scoop. For events and catering, SuperCool also offers unique frozen cocktails like the bellini with champagne, Cointreau and peach and a pomegranate Cosmopolitan with vodka, Cointreau, pomegranate and lime; as well as boozy ice cream flavors like Fire & Ice with Cinnamon whiskey and mint chip with Schnapp’s.

“We make all the ice cream on the spot, by hand, without the use of any freezer or machine,” owner Ben Fernebok said. “Since we don’t stir each batch the same way or use the same amount of nitrogen, we can control the texture, which is different for each flavor.”

Customers can find the boozy and non-boozy ice cream speakeasy, owned by Luigi Beltran, through the back patio of Ani Ramen, where scoops and rolled ice cream flavors such as Godiva Dark Chocoholic (infused with Godiva liqueur), Horchata (rumchata with Cinnamon Toast Crunch cereal) and tequila rose strawberry shortcake (infused with rose tequila) for a price range of $6 to $9.

The speakeasy will also incorporate elements of its sister restaurant, by using Japanese whiskies and sake to infuse in several of the ice cream flavors as well.

This is the first and only collaboration between the two brands but Luigi’s also has locations in Red Bank, Metuchen, Summit, New Jersey, with plans to expand further in 2020. 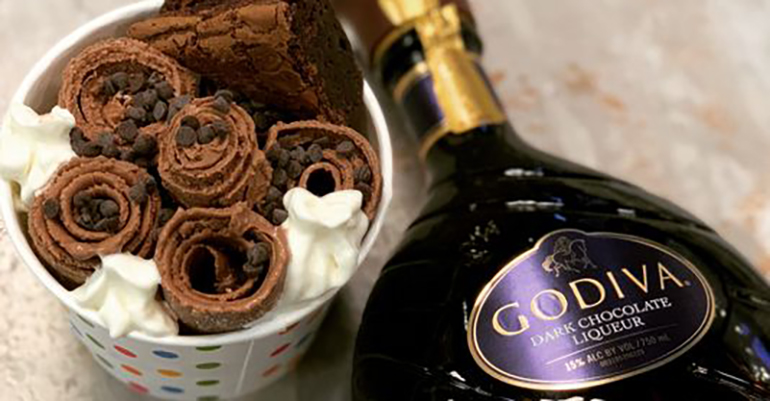 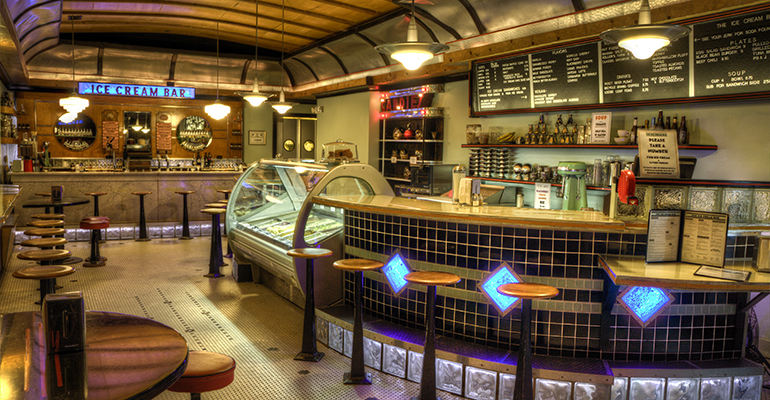 Each boozy creation ranges in ABV from 5% to 13%, including apple pie mead over milk chocolate and crème fraiche ice creams and “Cracked Cola” made with cola syrup, vermouth, bitters, and a cherry on top with an average check of $15. Even the non-boozy concoctions appeal to more grown-up tastes, like the Touch of Grey soda with candy cap mushroom syrup, acid phosphate, cream, and soda.

The shop also has a full cocktail and boozy-shake menu, and even offers an Afternoon Delight flavor made with CBD-infused red-velvet ice cream, and decadent adult sundaes like the Deconstructed Old Fashioned: an Old Fashioned in ice cream sundae form. Alcoholic toppings like bourbon whipped cream add to the adults-only vibe of the scoop shop.

Prohibition Creamery is 1,363-square feet and owner Laura Aidan has plans to add a second location in Austin soon. 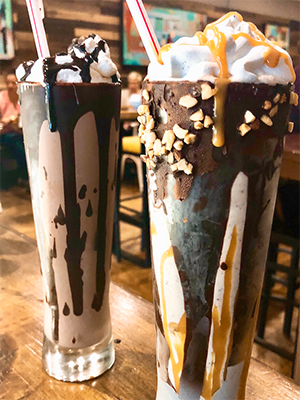 Browndog also sells wholesale pints of its regular and boozy flavors and “adult” desserts like adult s’mores made with chocolate whiskey ganache. 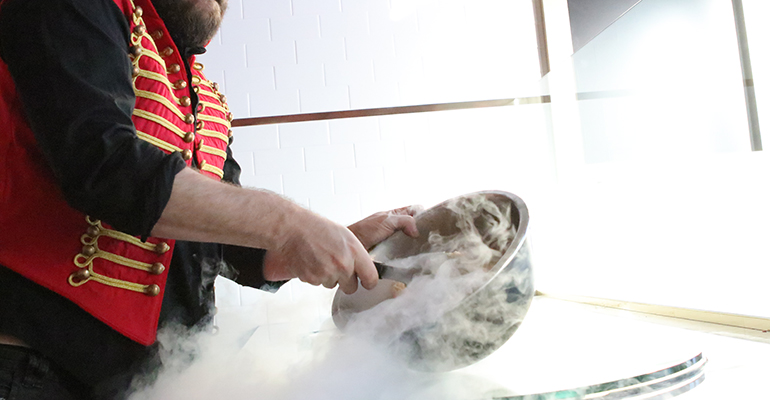 “We’ve become a culture that wants more in what we eat. The taste and experience of food can be so much more enjoyable,” Elizabeth Reed, social media manager for Spun Ice Cream said. “And, who wouldn’t love ice cream taken to the next level!”

Spun Ice Cream has a 925-square-foot scoop shop in East Austin but is also sold at Whole Foods and inside Noble Sandwich Co. in Austin.

This story has been updated to reflect that SuperCool Creamery's cocktail and alcoholic ice cream menu is only available for events.
TAGS: Food Trends
0 comments
Hide comments
Recommended Reading