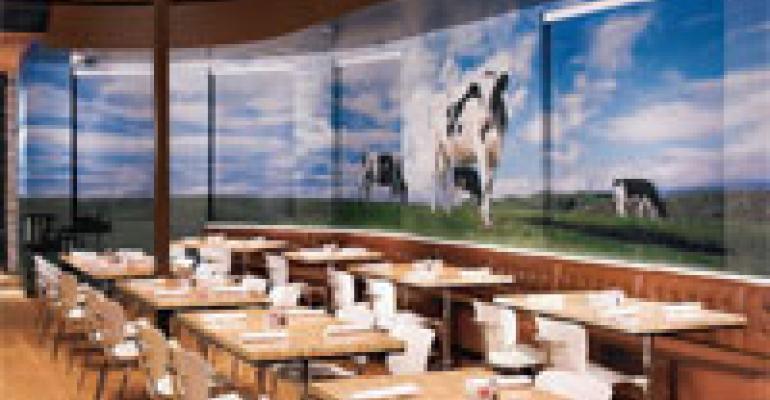 Sly as a Fox

Fox Restaurants has grown deliberately, one concept at a time. That's about to change.

AFTER BLANKETING THE Arizona landscape with restaurants, Fox Restaurant Concepts is looking elsewhere for new growth. Since the 1998 opening of his first restaurant, Wildflower, in Tucson, Sam Fox's company has created an average of one new concept a year. Today the Phoenix-based group runs 30-plus restaurants, mainly in Arizona. Recently, Fox has beefed up the corporate staff and started positioning several of those concepts for expansion, including the latest, True Food Kitchen. We talked with the c.e.o. about the company's new direction.

RH: How are you approaching expansion?

Fox: For the last couple of years we have been identifying what will or won't work on a regional or national playing field. We've been looking everywhere for the best real estate, including Boston; Miami's South Beach; Charlotte; Washington, DC; and Texas. We're taking our time, finding the right real estate and the right deal, making sure our growth is done in a smart way.

RH: Which concepts are you targeting for growth, and why?

Fox: We think two or three have growth potential. A lot of factors have to be there. One of our biggest hurdles is the return on investment, since we have only so much access to capital. Next, does it resonate with our guests? Do people really seem to enjoy the brand, are the top line sales strong, is there a strong culture inside the four walls? Some things you just know will work better than others. We have a Mexican concept, Blanco, that works and has a great return. But I don't know how well Mexican travels across the country. I think there are regional tastes. When we look at brands, do they resonate in different parts of the country?

NoRTH (an Italian concept) has been around for nine years. We're about to open the sixth in November. We haven't really made any changes in nine years, so we're taking the opportunity to open the next generation prototype. That will kick off more growth for NoRTH; we're looking at Texas and California.

Sauce (a pizza chain) has nine units and has been around almost as long as NoRTH. It's in two cities right now and sales have been great over the last 18 months. With some improvements we'll be ready to grow that in California and possibly Texas as well.

RH: You have said you like to open one restaurant at a time. What development goals and time frame do you have for the future?

Fox: The good thing is we don't have pressure to do anything. Obviously we have a plan in place, but that plan can change and deviate in a positive way as we go through the process. That process dictates how, where and when. We're looking at a lot of real estate and developers. We're planning for three to four True Food Kitchens, two to three NoRTH locations and two to three Sauces next year. We're also looking at probably two more Zinbugers, along with a partner who will open four to five on the East Coast.

We're not saying we can't or shouldn't go anywhere. We are going to be looking for the best real estate possible.

RH: Isn't that a lot to bite off all at once?

Fox: It's not set in stone. We're very flexible. We might be looking for a site for NoRTH and decide it would be better for a True Food, or Zinburger. We work with local real estate people.

RH: Up until recently your restaurants have remained relatively centralized. How will you maintain standards and controls across a broader geographic area?

Fox: I think the culture is the same in all of our brands. As long as we can hold onto the culture, that's really our strength. Since we haven't expanded at a fast rate, we have great people working in the stores right now. When we move into new markets, half the people will need to be local, and half people who have worked for us. We will need to connect with the local vibe or restaurant scene wherever we go; it's also important that we implement our culture. So we spend a lot of time and money on training.

We have regional vice presidents of operations, and they are building a training department and working at the store level with line-level people who want to grow their careers as well. Now we have enough of a base to handle that growth and culture.

Really the guest and the guest experience are at the forefront of everything we do.

RH: Do people associate any of your individual restaurants with the others?

Fox: We market Fox Restaurants concepts in Arizony, but outside of here the restaurants stand on their own. We get credit in Arizona for being a group, but we want our restaurants to feel like local, individual stores. Would I like them to grow and have a big audience? Sure. But we need to make sure each store can stand on its own and have a great local following.

RH: How consistent are they in look and feel?

Fox: None of them look exactly alike — but they are perfect for the area. We don't have a lot of details that have to be the same. They are a mix of new and reused buildings. The menus are different — about 80 percent is core. True Food's menu is less than that because we rely on local growers and purveyors. It will be a challenge for us to find the local produce, fish and meats. We need to make sure we can deliver on the promise that the brand has delivered at other locations.

RH: You are known for getting heavily involved in the design of new restaurants. Will that continue?

Fox: It's very personal to me. I'm very involved in the day-to-day of every single detail. The team working with me has made me a little more comfortable and flexible in making decisions, and that's something I will reluctantly give up.

RH: How is your new management team dividing up the work?

Fox: Our new president (Russell Owens) and v.p. of operations (Dan Clay) are building a great platform and strong organizational structure, which has allowed me to spend more time on details and being the creative driver of brands, menus and development. I can stay out of the minutiae of workers comp insurance. I hired (Owens and Clay) to my weaknesses and they've done a great job of building a team.

RH: How do you see the current climate for restaurants? And how have you been able to sustain revenues and open new locations while others are struggling?

Fox: I don't think there is a secret. I think it's mainly in the execution. We want to make sure we deliver on the guest experience: The place is beautiful, the service is great, the food amazing…when someone gets the check they might say they spent more, but it was worth it. We try to do that every single day correctly. When we don't do it, we make sure to identify what went wrong and not make the same mistake twice. We're facing the same things as everyone: high commodity prices, a sluggish economy, consumers that don't have lot of confidence. When they come into one of our restaurants, there needs to be a reason for them to come back. We work on that all the time.

RH: What future do you see for True Food Kitchen?

Fox: True Food resonates more than anything I've ever done. People connect to it. We have some people who eat there four to five days a week. It's had the lowest turnover of any of our brands. It's self-propelled. I don't want to compare us to other companies, but as in the early days of Starbucks, the people who propelled that brand were the users. They were the ones who pushed the growth and its success. There is a great feeling when you go to True Food. When you eat there you feel so good. You know how you can be addicted to bad food? It's the opposite. You are addicted to great food. Almost like the high you get from exercising. You become addicted to the food in a positive way.

RH: P.F. Chang's fronted you money to grow the True Food concept. Where do you see that relationship going as the brand branches out?

Fox: They have an option to convert it to an equity position in the brand. They have been great partners, and I have the utmost respect for their management team.

RH: Where do you see the company in 10 years?

Fox: That's hard to answer. I'm not a 10-year guy. Obviously we want to grow. Ten years ago I never thought I'd be in the position I am in today. We'd like to see career paths for the people in the organization.

The most important thing right now is if we have a great lunch service today.

Sauce
Gourmet pizza and wine
9 units in and near Phoenix

Wildflower
American with European and Asian influences
1 unit in Tucson