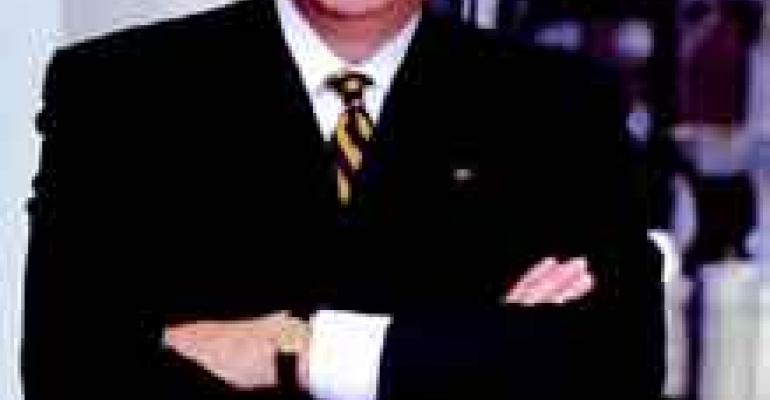 How did you hook up with Restaurant Associates?
As a teen, I worked at my brother's restaurant on Long Island, and then went on to school to learn hotel-restaurant management. After I got out, which was in the late '60s, the place to go for the sort of experience you couldn't get anywhere else was Restaurant Associates.

If you were not in the restaurant business, what other occupation would you pursue?
I don't know anything about this industry, but the movie business has always fascinated me. The notion of putting together all of the elements it takes to make a movie is, I imagine, not dissimilar to creating a restaurant.

What occupation would you least enjoy?
I couldn't have been a bean counter or any other job that is extremely repetitive. The best part of our business is that each day is different. Two days ago we had a wonderful wine dinner at Sea Grill celebrating the foods and wines of the Rioja region of Spain. The following morning we opened a new Krispy Kreme restaurant (Restaurant Associates in the New York area franchisee for the doughnut concept).The next day we held a James Beard dinner to raise funds for City Meals on Wheels, where 35 great chefs cooked for a thousand people. It never gets boring.

If you could trade places with someone else in the business, who would it be?
My business lifestyle is hard to beat, but I really admire Larry Mindell (the founder of Il Fornaio), and I have a lot of respect for Doug Schmick (a co-founder of McCormick and Shmick's).

Who do you consider your mentor?
I have a lot. One was a fella named Adrian Barbey, who taught me early on here at Restaurant Associates about hospitality and how to run restaurants. I also learned so much from Max Pine, who was the chief executive while I was c.o.o.

What was your worst idea?
Very early in my career I was a restaurant manager and I had three or four key people working for me who were older. I wanted to do the right thing, so I gave them Christmas Day off believing everything was organized. Boy do I regret that. Things did not go well and I picked up the checks of 65 dinners that day.

What has been the price of fame?
Besides being away from my family because of long hours on the job, I've missed a whole generation of television shows. When everyone was talking about what they saw on TV last night, like Seinfeld, I had no idea what they were talking about.

What was your most important business lesson?
Whatever you do, do it with quality. Quality is what makes your business valuable and respected. The quality of the services and products we provide at Restaurant Associates has saved the day for us.

What do people say behind your back?
They say I'm unreasonable and driven. They also say that they are not able to change my mind easily. But most of the time, they say I'm fair.