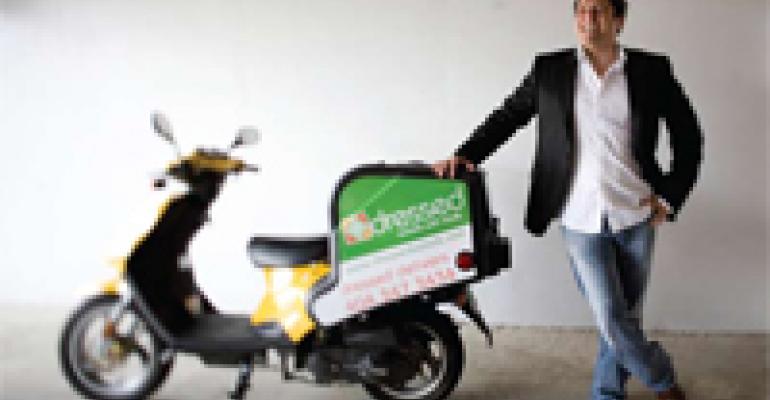 Chronic health problems, childhood obesity, special diets, food allergies, a diabetes epidemic, a better-informed public: Americans may still like to indulge, but with dining out so ingrained in our fabric, more often they also want something that's good for them or that lines up with their idea of healthy.

It's not likely many operators want or need to scratch their menus for a trimmed-down, de-fatted version. But if you're looking for some inspiration, perhaps a way to tweak some portion to accommodate the more health-minded segment of your audience, check out these concepts, which seem to be on the right track. All offer a different take on better-for-you fare.

Food delivery options have long fallen largely into one of two camps: pizza and Chinese. Last year Justin Smolev decided Atlantans were ready for a third alternative: salads. Thus was born Dressed. The first location, in the city's midtown district, has 46 seats and delivers salads to nearby offices and residences.

Dressed's menu comprises more than 70 ingredients and 24 house-made salad dressings. Guests can create their own made-to-order salads or order one of several chef-designed favorites such as Caesar or Cobb. All can be wrapped in flatbread and served as sandwiches. Specialty soups change daily.

Smolev says he spends a little more to ensure the highest-quality product, but organics generally push the envelope, considering the $10 check average for lunch or dinner.

Although he admits that an item like the Steakhouse salad — which incorporates grilled steak, fried onions and bleu cheese — isn't necessarily sending a health message, the implicit attraction for most of his customers is in fact health, or at least a meal that won't weigh them down.

When he launched Dressed, Smolev expected his typical customer would be mainly women between 25 and 45, but the first location draws multiple generations, cultures and genders. “It's amazing how many men come into Dressed,” he says.

Two more units are planned for the city, and Smolev also announced a partnership with some entrepreneurs in Hong Kong to expand there.

“Salads have been around for a long time,” Smolev says. “I feel like I've just taken the concept and elevated it to a pretty high standard.

A lot of restaurants dabble in organics, but Alberto Gonzalez decided to take a more aggressive tack. He took his life savings and skills from managing an organic farming project and channeled them into Gusto Organics. Gusto opened early this year in New York City as reportedly the country's first USDA-approved, 100 percent organic restaurant.

Gonzales, a change management consultant who emigrated from Argentina two years ago, was aghast at the food he encountered when he first moved to New York. “It's kind of scary that people like me, medium-income people, are forced to eat terrible quality food,” he says. He set out on a mission to bring organic and sustainable ingredients into the mainstream. It took him about a year to find products for a totally organic menu — everything that goes into it, aside from the water (filtered city water) and salt (sun-dried sea salt with no additives). The restaurant is also green: Any item that can be recycled or composted is, much was built with recycled wood, power comes from solar panels and the wind, takeout containers are biodegradable.

Gusto, near the busy intersection of 14th Street and Sixth Avenue, has 70 seats inside and about 40 outside. It serves breakfast, lunch and dinner seven days a week as well as catering and delivery. Self-serve pizzas, flatbread sandwiches, empanadas, soups and a salad bar are provided during the daytime; dinner is a full-service affair with the likes of risotto, gluten-free pasta, filet mignon and grilled chicken. Brunch is served on weekends and holidays. Checks average $6 at breakfast, $12 at lunch and $26 at dinner. Gonzales has deliberately kept prices low to encourage business.

At a price point like this, it's doubtful that the first Gusto is making a profit, but that hasn't stopped Gonzales from pressing on. Two more Gusto locations are expected to pop up by the end of the year elsewhere in Manhattan. He regularly fields requests to branch out to other parts of the U.S., but for now he intends to stick close to home, a gamble he took because of the potential for wider exposure. “We are taking a lot more risk at the beginning (with the hopes that) it will pay off,” he observes.

Gonzales admits that menu prices don't genuinely reflect his cost to do business--$18 a pound for organic yeast, for example. But he claims to be less interested in turning a profit than in setting an example and encouraging other operators to offer similar products. He believes — and time seems to be showing — that increased demand for organic product will promote production and eventually bring prices more in line with conventional foods. He calls it “a virtuous organic circle,” and he senses that enough Americans are willing to back up their principles with their money.

But he's not blind. He says Gusto has thrived because patrons like the food. “People are getting addicted to our food not just because it's good for you but because of the taste.”

On the west coast, a new vegetarian concept in Orange County, CA, has managed to overcome the mashed-yeast-and-sprouts stigma to enter the mainstream. Readers of the Orange County Register voted The Veggie Grill best new restaurant in the county when it opened near the University of California Irvine last year. Reviewer comments range from “a menu full of items that even a die-hard carnivore would like” to “wholesome, high-quality food way beyond what most of us imagined anything remotely vegetarian could be.”

Veggie Grill, which promotes its “plant-based protein,” now has two units open and a third on the way. They average 85 seats, are open from 11 a.m. until 10 p.m. and see average checks of $12.50. The menu includes American classics with a twist: “Wings,” fries, salads, soups, sandwiches and burgers incorporate tempeh or faux chicken and steak in place of meat.

Veggie Grill was the brainchild of T.K. Pillan, an e-commerce veteran; Kevin Boylan, a money guy; and menu developer Ray White. They call it “the next step in the evolution of American dining.” The company plans to open four more units in the Los Angeles/Orange County area next year.

Body builders and other high-protein diet fans are the audience for The Pump Energy Food, an 11-year-old concept based in New York City. The menu revolves around the Mediterranean diet and features nothing fried, no mayonnaise or butter and whole grains instead of white flour. About two years ago, investment banker/fitness enthusiast Adam Eskin bought the concept — described as “food you don't have to worry about.” He has plans to expand it beyond the current five locations.

“The mission has always been clean, simple, healthful food,” Eskin says. “The idea is that anything you order off the menu will be good for you.” Brooke Shields, Howard Stern and Tyra Banks are among the fan base.

Eskin has spent the last year and a half revamping The Pump to update the menu and address some of the operational issues that plagued the original locations. In addition to upgrading some prepared items with fresh versions, he's simplified what was once about 160 choices down to 25 of the best-sellers — mainly to streamline service. Before, guests might have to wait up to 25 minutes for their food, 75 minutes for delivery orders, and orders were fraught with mistakes. A build-your-own option remains on the menu for diehards who cling to their favorites.

The kitchen equipment also got an overhaul. At a prototype, which opened in July, a new steam chamber helps prepare a variety of items, from chicken to vegetables, and a Chipotle-style assembly line was installed. The prototype dining room, which seats about 50, was designed to suggest a Soho loft kitchen, with white subway tile, exposed copper piping and touches like custom bar stools that look suspiciously and intentionally like weight-training apparatuses.

The Pump doesn't provide a nutritional analysis of its menu items, even though it's a popular request, but Eskin says the nature of the menu makes it clear that nutrition is a primary concern. “Our position on health and calories is somewhat different,” he says. “We think calories are less important than the types of calories you're eating…protein, complex carbs and the right kind of fat.”

With the original stores, Eskin says the concept focused on customers who were serious about their health. The new prototype is designed to reach out to a broader demographic. “People are looking for food that tastes good and is good for you,” he says.

“We're Not the Food Police”

Rock Creek's hook is a low-calorie/high-taste offering. Launched in 2005 and followed by a second location in 2007 by partners Judith Hammerschmidt and Tom Williams (an attorney and venture capitalist, respectively), the restaurants' philosophy is “mindful eating for all seasons.” The promise, much like the Seasons 52 approach, is a meal that will satisfy without being heavy or highly caloric. But Rock Creek goes a step further, filling the menu with local and organic offerings that change based on what's available.

“If you looked at the menu and never turned to the last page, you would not see the nutritional information,” Hammerschmidt says. (It's on the last page, provided by a nutritionist.) Most people look at it the first time and never do again, she adds. The 165-seat Washington, DC, location and the 90-seat Bethesda unit have no fryers and use no butter or sugar. Portions of fish, chicken and beef are between 5 and 7 ounces.

“You can have a 1,000 calorie, three-course meal, go home, feel well-fed and sleep and not feel that you were deprived,” she says. “We're not the food police…we cook the way you're supposed to eat, and the way every mother would cook if she had the time every day to get fresh food and cook for the family.”

Hammerschmidt describes the target audiences as comprising two groups: Those who, as she says, “have given up their health to get their wealth,” and a younger group, perhaps 20 to 35, who are serious about what they put into their bodies but don't have time to cook for themselves.

The biggest challenge for Rock Creek, other than convincing the uninitiated that they will leave satisfied, is probably abiding by the locally sourced philosophy. Nine months of the year it's not a problem, but the other three months require a bit of imagination to stick with the local theme.

With checks averaging $20-$24 at lunch and $44-49 at dinner, Rock Creek might be a bit of a stretch for that younger target audience, so Hammerschmidt says she's looking at branching out into three-meal fast casual operations with an emphasis on takeout. And she likes the demographics of the DC area, where incomes and education levels are among the highest in the country. “We know we're onto something,” she observes.