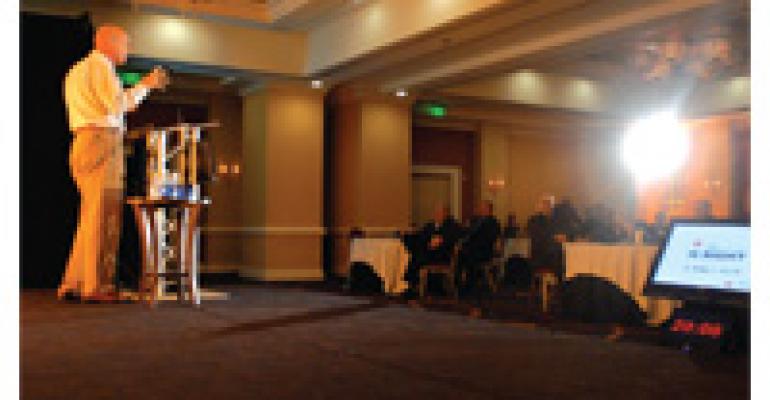 Meeting of the Minds

Operators seeking the key, not just to weathering the current economic storm, but to thrive going forward, got plenty of advice from seasoned pros at the 11th annual Restaurant Hospitality Concepts of Tomorrow Conference. The latest edition, set in the foodie paradise of San Francisco, zeroed in on grit, creativity and a return to basic values as important tools to surviving what has become the battle of the fittest.

Leading off was Joe Micatrotto, founder and former c.e.o. of the Buca di Beppo chain (a Richard Melman Concepts of Tomorrow Award winner) and now a partner in Micatrotto Restaurant Group. Micatrotto, recounting his nearly four decades in the industry, admitted that he considered himself “the Forrest Gump of the restaurant business,” thanks to sharing the company of great people throughout his career.

For operators who have survived the latest slump, “your competitive advantage today has never been better,” he told COT attendees. But this is no time to let up. “You need to work as though everything depends on you,” he advised. Operators who are thriving are being “aggressive, not regressive,” he observed. And they are good at reaching past the customer's stomach and to the heart, he added.

David O'Malley, who steers West Coast operations for Kimpton Hotels & Resorts, focused on service from an operator's angle. Kimpton, he said, begins by stressing fundamentals: Have we give our employees everything they need to know to do their job? Do they understand the concept? Do they buy into the corporate values?

O'Malley also acknowledged that guests are increasingly food and beverage savvy and that servers need to keep up with their knowledge level and curiosity. As a result, Kimpton has taken steps such as stepping up bartender training and running wine boot camps for waiters to hone their beverage knowledge.

“We have re-entered the macaroni and cheese economy,” Clark Wolf, trend maven, declared. His message: Americans are flocking toward comfort food, and if you want to attract them, make sure at least part of your menu satisfies that craving. As Wolf pointed out, the main reason people visit restaurants is “to feel good,” according to a MasterCard study.

Wolf shared a number of suggestions for restaurants looking to excel:

A jobs recovery will be the key to when restaurant sales start growing again, predicted Dennis Lombardi, executive v.p. for foodservice strategies with WD Partners. Lombardi, a veteran restaurant consultant, examined the long-term effects a failing economy is likely to have on consumers.

Lombardi suggested that the worst may not be over until late 2010, and even then, “consumers will emerge, but they will have been changed by the experience,” he cautioned. In particular, baby boomers have realized they need to stash money away for their retirement. Quick service and casual dining restaurants will retain market share, but many belt tighteners are shunning fine dining.

If boomers are trimming their dining budgets, Millennials (those born after 1980) are picking up the slack. Any restaurant that isn't trying to attract these younger diners is missing the boat, Lombardi suggested.

He also encouraged the importance of capitalizing on every guest visit. “In our business, there is an infomercial every time a customer walks through the door,” Lombardi said. “Do something unexpected and pleasant, and you will break through the clutter,” he added. Free dessert is a low-cost, high-impact example.

Bill Main, who helps restaurant operators develop growth and marketing strategies, agreed that giving guests something for free is a good way to burnish your value proposition to guests. “Give spontaneous surprises,” he said. “We have to reach out to our frequent customers and let them know they're appreciated.”

Main told attendees that every operator needs to think like a brand. That means trusting empirical evidence over gut instinct, looking at the demographic and psychographic profile of your customers, reengineering your menu and pricing, and paying more attention to the details of service.

“Different, better, special” are the attributes you should aim for when looking at your offering versus the competition.

One way to differentiate is to create a signature touch that helps people remember your restaurant. Main mentioned the fresh tortilla machines on prominent display at Chevy's Mexican Grill locations as a good example of how to make that kind of impression.

SHOW HIM THE MONEY

Is now a good time to sell? “I would tell you not only no, but hell no,” said Rob Hill, an investment banker with J.H. Chapman Group. The economy has stung values of restaurants, and even if they were worth more, the lenders are shunning the business. “I don't know what will cause lenders to come back or how long it will take,” Hill said. Unless an owner is forced for personal financial reasons to sell, his advice is to wait.

Meanwhile, he said operators should be getting their house in order and priming their business for sale or expansion. “Concentrate on putting butts in seats,” he suggested. Lenders want to see evidence of long-term stability. And it wouldn't hurt to invest in some technology to help track traffic patterns into your restaurant, he added.

Not every concept Richard Melman has created has been a slam dunk. After planning and thought, he opened his first restaurant in 1971 and faced daily stress when the numbers didn't seem to be there. He even debated switching to another field altogether — until, in the third month, he noticed a shift in business and suddenly he could breathe easier. But as a result of that experience, he said, “I will never take a restaurant opening for granted.”

Melman offered some practical advice about how to weather the current economic environment. “I think it's a time not to get stubborn, but to get more creative,” he said. At Lettuce Entertain You Enterprises, creative responses have included new promotions to members of the company's frequent diner club and broadening the appeal of the popular Food Life concept at Chicago's Watertower Place to bring in more evening business. In the end, he reminded the audience, “The biggest expense you have is an empty seat.”

Food is also a top priority for Larry Mindel, who has spent nearly four decades creating and running restaurants at Spectrum, Saga and, most recently, Il Fornaio. Mindel jumped off the fast track in 2003 to open his own independent restaurant, Poggio, across the Bay in Sausalito. Besides food, Mindel considers decor, professional service, and a clear value proposition the keys to success.

Mindel had a few tips for newcomers to the restaurant game: Never fall in love with a location, and don't believe the hype about you.

Charlie Ayers, who became a media darling as executive chef for Google, shared the thinking behind his most recent venture, Calafia Café & Market a Go Go in Palo Alto, CA. The concept, which focuses on healthful, artisan-style, sustainable cuisine in a fast, affordable format, arose from Ayers's own frustration at finding that kind of restaurant experience.

Nothing on Calafia's menu takes more than 13 minutes to cook, and guests order and pay for meals tableside, which speeds up the process. Half of Calafia's space is a market offering prepared foods to go. Selections tend toward vegetarian, local products with health halos.

Ayers has plans to expand to other markets with similar highly educated demographics — he mentioned Portland, OR; Chapel Hill, NC; and Brookline, MA as possibilities.

Michael Dellar, c.e.o. and president of Lark Creek Restaurant Group, walked through the development of his company's Restaurant Hospitality Concept of Tomorrow, Yankee Pier (see June 2009 RH). The seafood-centric chain, with a handful of locations in the Bay Area, appeals to families willing to spend a little more for healthier fare.

The brand's reliance on fresh and sustainable ingredients is not the most cost-effective way to operate a restaurant, Dellar admitted, but he added that “sustainability for us is not… negotiable.”

To appeal to a broader audience, simplify the menu and create a more casual atmosphere; provide portion choices and dine-at-the bar flexibility.

Before the COT Conference got under way, a bunch of us (magazine staff and conference attendees) took a tour of San Francisco's famed Ferry Building Marketplace. The historic building, built as a transportation hub, now features local farmers and artisan producers who celebrate the Bay Area's vast ethnic diversity and its return to sustainable methods of agriculture and production. The tour was led by Aaron Noveshen of The Culinary Edge, a foodservice development firm. We explored numerous shops that offer among the country's best bread, cheese, produce, seafood, beef, pork and more. And, of course, we sampled to our heart's delight. In addition to artisan shops, the marketplace is also home to several restaurants, including the famed Slanted Door, James Beard Award-winning chef Charles Phan's modern Vietnamese restaurant. Next time you're in San Francisco, The Ferry Building Marketplace should be one of your must-see stops.

“What worked yesterday and today — the basics — won't cut it going forward,” said ANDREW FREEMAN. He should know, since he makes his living spotting trends and ways to work them for his clients, which include Palm Restaurant Group and Kimpton Hotels and Restaurants.