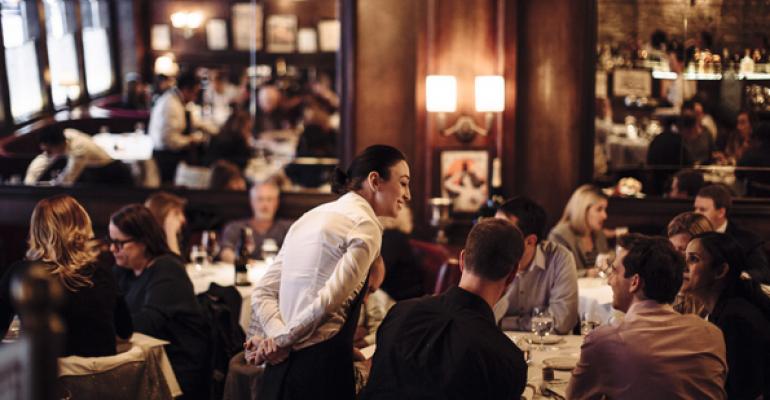 Big, expansive restaurants are great fun when they’re full of happy, lively customers.  They can be graveyards on slow nights when many tables are empty and the space feels cold and hapless. That’s what was happening at Paris Club, a sprawling Lettuce Entertain You Enterprises property that opened in 2011 in a downtown Chicago space once occupied by Brasserie Jo. In characteristic fashion, the much-admired restaurant company moved fast to make changes.

“Paris Club occupied a very big space,” explains Jerrod Melman, son and partner of LEYE founder Rich Melman. “What we were finding is that we would often have 500, 600, 700 people come for dinner on a weekend night and the place was energetic and lively. But early in the week, we might do only 150-200 people. The place wasn’t cozy and it lacked energy.”

Melman, along with his Paris Club partners—including his brother, R.J., sister Molly and chef Doug Psaltis—looked at how Rich Melman had dealt with similar scenarios, and saw that he’d had big success putting two concepts under one roof, like Wildfire and Big Bowl.

“We had already been monkeying around with a ramen noodle concept, so it was a perfect time to include it in the redesigned space,” explains Jerrod.

Within six weeks, the old Paris Club was divided in half. A new bistro took over one side and Ramen-san, a Japanese noodle concept, claimed the remaining space. They did the entire conversion for under $1 million, Jerrod says. Studio Paris Nightclub on the second floor of the original space was maintained.

Paris Club’s name was changed to Paris Club Bistro & Bar and the number of seats shrank from 250 to 120. The new bistro concept, he says, has an intimacy and atmosphere that better matches the style of food that Psaltis was creating.

“Believe me, restaurants are like children and there is an emotional component involved,” says Melman. We loved it and when things were going well it was fun and exciting. But we don’t like to sit with things that aren’t working."

In reality and on paper, it was a terrific business decision. Instead of relying on one demographic, the new dual concept is drawing in customers who are looking for the intimate, adult setting of a bistro and a younger Millennial crowd craving a hipster, less expensive evening in a noodle shop.

Chef Psaltis, who worked for legendary French chef Alain Ducasse at the Essex House in New York City, said he was excited about the change because he and his partners wanted to do more authentic bistro fare, and the smaller space is perfect for it. Psaltis says he was also excited about the noodle concept because he’s been a long-time fan of ramen from frequenting many noodle shops late nights after work in New York City. It didn’t hurt that he’s also traveled extensively in Asia exploring cuisines.

“At the bistro, we’re doing some pretty authentic stuff, but at the noodle shop we were more concerned about getting the broths for the ramen right and from there it was no holds barred,” he says. In other words, authenticity at Ramen-san has given way to a fun menu that caters to a younger crowd not afraid to experiment. Consider, for example, a ramen dish that includes fried chicken and another with smoked brisket. Authentic? No. Delicious? Yes.

It’s at the bistro where the French-trained chef really shines. Paris Club Bistro & Bar features three levels of fruits de mer, including one with two-dozen oysters, shrimp cocktail, whelks, half a lobster and a half-pound of Alaskan king crab ($125.95). Steak frites, of course, also takes its place on the menu, as do classics like trout amandine, roast chicken and spice-roast duck.

“We are really happy with the results (of the conversion), and it’s getting better each day,” says Psaltis.

“We’re already ahead of projections,” says Jerrod. “In terms of square footage, the dual concept is generating more than double the sales of the large format restaurant. That makes us pretty happy we made the change.”