Bringing tapas back to its origins in Spain is the new restaurant Moruno, which opened in early February in Los Angeles’ Farmers Market.

The menu at the casual Moruno is centered around lamb and chicken kebabs, grilled over charcoal and served by the skewer or in 9-inch sandwiches called Submorunos. Alongside are entree options like whole fish a la plancha, or grilled tripe with white beans; as well as starters like a half-rotisserie cabbage with picked mushroom yogurt, or pork belly chicharrones.

Here’s a look at the new Moruno.

Starters might include a roasted butternut squash, and Moruno offers house-fermented vegetables.

A separate boutique Bar Vermut above the restaurant is scheduled to open later, as is a sibling Bar Moruno coming to downtown Los Angeles’ Grand Central Market.

Managing partners Chris Feldmeier, who is executive chef, and David Rosoff, general manager. The two worked together previously at the Los Angeles restaurants Osteria Mozza and the now-defunct Campanile.

The skewers are grilled over charcoal and typically served with bread to soak up the marinade.

A moruno is a type of tapa found throughout Spain. Here executive chef Chris Feldmeier marinates lamb and chicken with cumin, paprika, turmeric and peppers.

Moruno aims for a relaxed upscale casual vibe in the style of Spain’s tapas bars, where people gather for a bite and a drink in the afternoon, before dinner or later in the evening. Wines from Spain are spotlighted, as are a lineup of sherries. 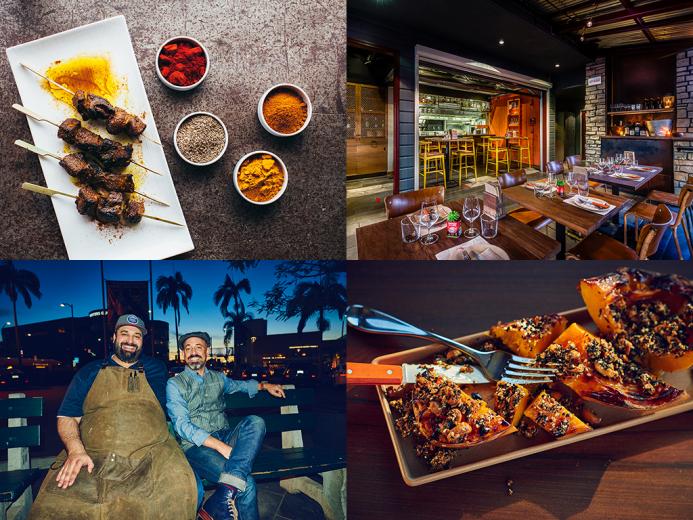 Next Up
The Indie Power List: 5 independent restaurant owners who found new ways to serve a changed consumer
Start Slideshow ›