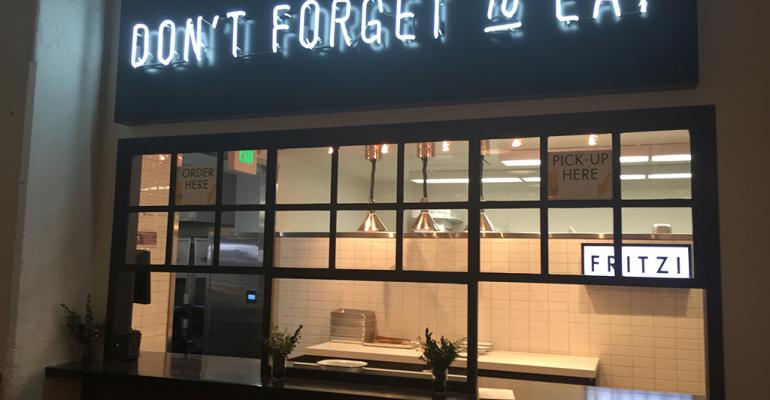 Los Angeles chef Neal Fraser is taking a step into the fast-casual space with the launch of a new concept called Fritzi. Fraser is known for his full-service restaurants BLD and Redbird, the latter located in an event space he also owns called Vibiana, a former Catholic cathedral that has been transformed into an elegant venue for weddings and parties.

The new Fritzi is a 60-seat restaurant adjacent to the Arts District Brewing Co., a brewery and pub in downtown Los Angeles’ burgeoning Arts District. To some degree, Fritzi is an extension of Fraser’s elevated hot dog outlet called Fritzi Dog, in the city’s Original Farmer’s Market food hall.

But with Fritzi, Fraser offers a more expanded menu that includes a lineup from the wood-fired rotisserie, including roasted chicken; charred Brussels sprouts; spit-roasted cauliflower, potato waffles and tater tots—as well as a full bar featuring the beer brewed next door and cocktails.

Open for lunch and dinner, guests order at the counter and food is run to tables, though full table service may be added later at dinner.

From the brewery side, Fritzi offers a separate menu through a takeout window—just down from the skee ball aisle—within the bar, where guests can grab a burger, “ham fries” made with Vermont beer cheddar, or a more healthful Forbidden Rice & Quinoa Salad with winter squash, smoked blue cheese and hazelnuts in a sherry vinaigrette.

Here’s a look at the new Fritzi.