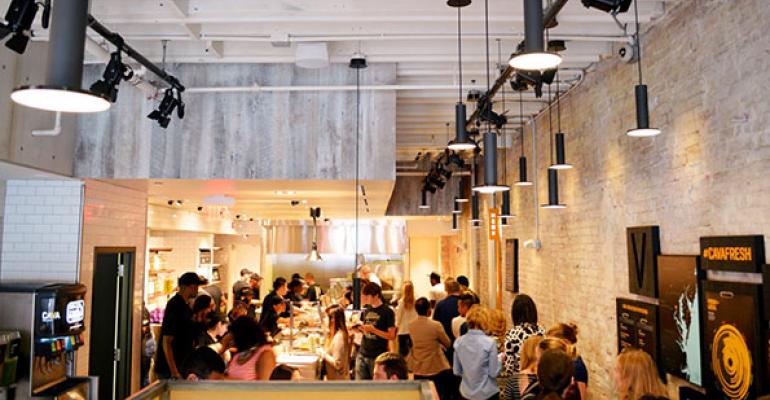 Everyone knows fast-casual is the “it” segment, thanks to consumer preference and fast-growing chains like Chipotle and Panera. Lately we’re seeing that space invaded by established chefs and owners who made their names in more formal, full-service restaurants.

The owners of Washington, DC-based Cava Mezze crossed over in 2011 when they launched Cava Grill. The spinoff concept is expanding faster than the original.

Cava Mezze was born in 2006 when Ike Grigoropoulos, Ted Xenohristos and Dimitri Moshovitis—each children of Greek immigrants—couldn’t find a traditional Greek restaurant that focused on mezze, also known as tapas, style dining. Moshovitis, the chef, brought his training from Baltimore Culinary College and his experience cooking in Ireland and Greece. He focused on simple ingredients and fresh, local food and added a passion for Greek cooking that he learned in his mother’s kitchen.

A year after Cava Mezze opened Rockville, MD, it was named one of Washingtonian Magazine's Top 100 restaurants. Moshovitis describes the menu as “a modern-American spin on our families’ traditional Greek cooking,” a cuisine he says was new to the DC area at that time. Building on the success of the first location, the Cava team launched a product line of handcrafted dips and spreads, which are now sold in Whole Foods.

“Both businesses showed us that we were delivering what audiences wanted and that we had broad appeal,” Moshovitis says.

That broad appeal got them thinking: What if they could take the dishes at Cava Mezze, modify them slightly to speed up preparation and deliver them to the masses? Thus, the fast-casual concept Cava Grill was born.

“Cava Grill was our way to combine our first two businesses but tailored for an audience with a limited schedule or budget, looking for a fresher, healthier option,” Moshovitis says.

Reaching a larger audience is the greatest part about it, he notes.

“In our full-service restaurants, we may do 100 covers a night. Cava Grill allows us to reach hundreds more in a day and still provide them with a fulfilling dining experience and great food that I can stand behind.”

Today, there are three full-service Cava Mezze locations, in Rockville; Arlington, VA; and on Capitol Hill. There are three Cava Grill locations in the metro DC area and one each in Bethesda, MD; Fairfax, VA; and McLean, VA.

Plans are underway to open three more Cava Grill locations in the coming months, a pace Moshovitis says would not be possible in the full-service segment.

But how does a trained chef apply his skills in the kitchen to dishes that require speed and customization?

“We’ve taken cooking techniques and ingredients that I use in our full-service restaurants and translated them for a fast-casual kitchen,” Moshovitis says. “For example, at Cava Grill we’re sous-viding and braising our proteins, cooking everything in house daily, steeping our own syrups for our fresh-made seasonal juices and baking our pita in our stone-fired ovens.”

Wanting to serve the masses might not be the only reason chefs are getting more casual—it might also have something to do with where the next generation of diners wants to eat. A recent study by Technomic shows Millennials are increasingly turning to fast-casual restaurants for healthier and more customizable menu items. Since 2011, monthly visits by 19- to 21-year-olds to fast-casual restaurants increased 2.3 percentage points, with an even greater surge, 5.2 percentage points, for the 22- to 37-year-old set, according to the study.

Cava Grill's food is teed up to feed these folks. Moshovitis prides himself on delivering quick food to deep lines in around 10 minutes.

“For Cava Grill customers, the loyalty we've found has a lot to do with the transparency of sourcing and ingredients and a diverse menu that allows for customization,” he says. “We’re dedicated to having an open and personal relationship with customers so that they feel empowered with information to help make informed decisions at mealtime.”