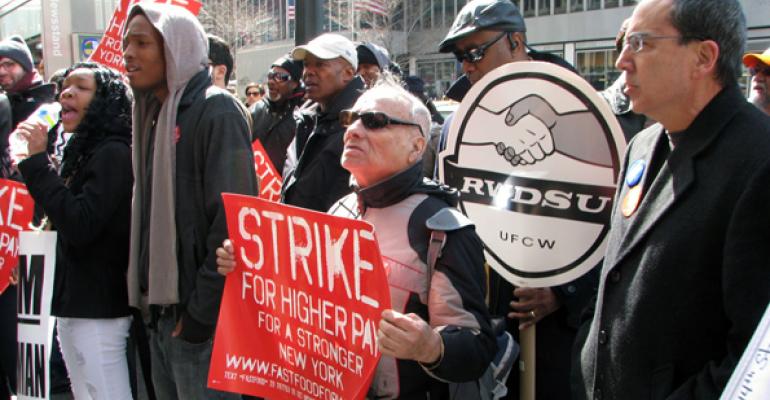 Today is not exactly a red-letter day for the restaurant industry. Fast-food restaurants and retailers are expected to be hit by the largest-yet walkout over hourly workers’ demands for better pay.

Mini-strikes started last November in NYC and spread this summer to Chicago, Detroit and Kansas City; on Thursday, organizers expect action in up to 35 cities. Striking workers are demanding higher pay—more than double the current national minimum wage of $7.25—and the right to unionize.

If you think this is a passing fad, think again. “It’s absolutely going to continue to grow,” Steven Ashby, a University of Illinois labor and employment relations professor, told Time Magazine. “The energy of the workers, their passion, their commitment, is very, very high. They basically feel like, ‘We’ve got nothing to lose.’”

Pressure to increase wages is only one labor issue facing restaurant owners; many are also fretting over how the Patient Protection and Affordable Care Act will hurt their bottom line. Not so with Starbucks. While some restaurants and chains like Papa John’s have opted to curtail full-time staffers’ hours to avoid having to insure them, c.e.o. Howard Schultz said this week that the company plans to maintain existing healthcare coverage for all employees—even part-timers—regardless of how the new law affects insurance.

"It's not about the law. It's about responsibility we have to the people who do work and who represent us," Schultz told CNN this week.

There’s a bit of progress on yet another battleground for many restaurant operators, the feared health inspection system. New York establishments won a victory recently with a reduction in fines to pre-2010 levels, before the city adopted its infamous letter grade scheme. Under the existing system, violations could result in fines from $200-$2,000; a new system will set fines for 60 percent of all violations at $200. The fines were just one aspect of the new system that restaurant owners considered irksome; 66 percent of the restaurateurs surveyed by City Council last year called the letter-grade system “poor.”

Finally, a ruling by the IRS that automatic gratuities are wages, not tips, has some restaurant owners rethinking their policies regarding tips for large parties. Many are mulling the idea of dropping these gratuities, designed to protect servers from cheapskate guests. But if these larger gratuities are deemed wages, servers will need to wait until payday to see the money. The rule would go into effect Jan. 1.

Darden has already dropped automatic tipping at about 100 restaurants, according to the Reading (PA) Eagle. The company will decide whether to extend that policy across all of its brands by the end of the year.