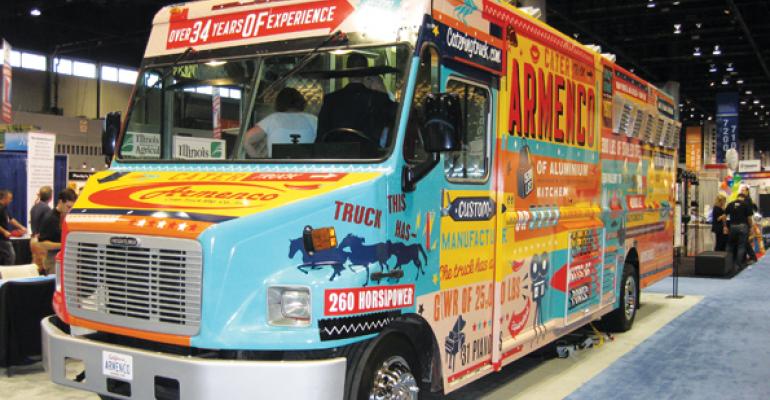 One-night stands by a rotating cast of food truck operators and freelancing chefs provide value and excitement at one Philadelphia bar.

Food truck operators do plenty of late night business when they park outside of bars. So why not reproduce the food truck experience inside those bars instead? That’s the idea behind a food-truck-like food cart operation that rents for $50 per night inside Garage, a Philadelphia beer bar. Renters try out new dishes on a large and hungry audience and maybe make some bucks in the process; Garage provides bar customers with the adventurous street food normally available only from food trucks–without the obligations that come with running its foodservice operation itself.

It’s not that Garage owner Jason Evenchik doesn’t know a lot about restaurants. His group runs four other nightlife operations in Philly that put a varying degree of emphasis on food. They include Vintage, a wine bar; Time, a three-concepts-under-one-roof setup that combines a restaurant, whiskey bar and taproom; Bar, a straightforward hangout; and Growlers, a beer-centric neighborhood pub. Under construction is NoLibs, which will have a strong food focus, along with 50 beers on tap.

Garage opened last summer; its spinoff kitchen began serving in January. Evenchik and his partners wanted the place to have interesting food without dealing with the hassles that come with full-on restaurant operation. Their solution: take a hand-off approach via outsourcing.

The idea was to install the equivalent of a permanently parked food truck inside Garage, then make the space available on a one-off basis. Visiting cooks and chefs pay the modest $50 rental fee up front and keep whatever they take in. Renters also have to thoroughly clean the cooking area after they use it, leaving it ready to go for the next user.

Garage has a super-compact, stripped-down kitchen similar to that of an over-the-road food truck. There are steam tables, a flattop, a small char-grill, a hood, utilities including gas and more, all of it having passed muster with Philadelphia’s health department. The cooks feel like they’re working in a food truck; customers who step up to the window counter to order feel like they’re buying from one.

Who’s doing the cooking so far?

"It's a mix of food-truck people, chefs with a night off and sous chefs who want to try their own thing,” Evanchik tells website Philly.com.

The setup offers worthwhile benefits to both cook/renters and to Garage.

Prospective food truck operators can get a feel for the realities of food truck operation and test their concept on a built-in audience. If it goes well, they can take the next step and get into the food truck game by renting a mobile version full-time. There are plenty of rental options out there, including Road Stoves, Mobi Munch and foodtruckrental.com.

Those who already have a food truck or are working restaurant chefs can try out new dishes on real-world customers to see what kind of reception they get. Establishing proof of concept for a fixed fee of $50 a night—which you’ll likely earn back from sales—seems like an unbeatable deal.

For its part, Garage gets to offer its customers an ever-changing array of exciting food they can’t get anywhere else. Prior to opening its faux food truck cart, Garage, located very near two of Philadelphia legendary cheesesteak operations, Geno’s and Pat’s, allowed customers to bring food from these places into Garage to eat. That’s still the policy, but food truck food gives this beer bar a different, or at least much-enhanced, vibe. In the current era, the ability to attract the attention of the foodie demographic is a huge plus. Few customers expect a hip bar like this one—which features 150 beers by the can and plenty of Skee Ball action—offer adventurous food. Expect other bar owners to give some version of this one-shot permanent popup a try.

Make the most of your restaurant's food truck options
May 15, 2013