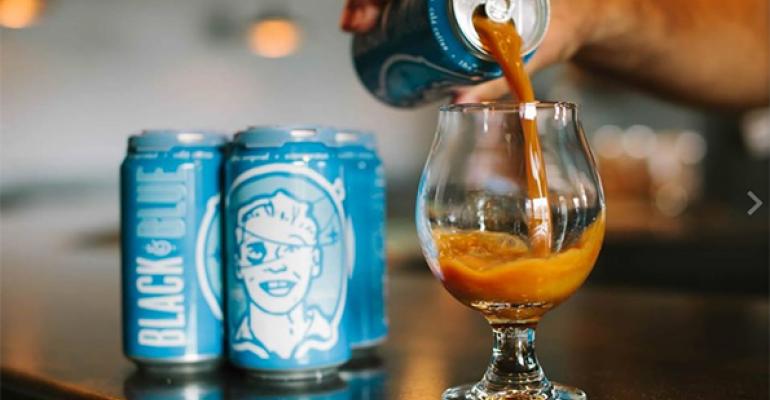 We don’t want to overhype the impact nitro coffee could have on some restaurants’ cold coffee sales this summer. But it’s catching on so fast in the specialty coffee house segment that its handful of makers can barely keep up. It’s wildly profitable if you brew it in house, but even canned and kegged versions purchased from outside vendors can add buzz to a restaurant’s bottom line.

Nitro coffee isn’t a brand, even though it sounds like one. The term refers to any cold-brewed coffee that’s been injected with nitrogen. Just as adding a tiny amount of carbon dioxide to soft drink syrup alters the texture and taste of the finished product, nitrous oxide improves the mouthfeel and drinkability of cold coffee.

“Nitro coffee will blow up cold brew,” the magazine’s Andrew Knowlton predicted. “Just when you thought you’d figured out iced coffee, this latest take (pioneered in part by the obsessives at Stumptown) hits coffee counters. Pulled from a tap, nitro is cold brew infused with nitrogen to create a smoother, creamier drink. (Think Guinness with a different kind of buzz.) But before you guzzle three of them, be warned: They are caffeine bombs.”

If anything, the magazine underestimated how fast nitro coffee would catch on. Right now, suppliers are struggling to catch up with demand.

Stumptown has gone all in, brewing nitro at a new 8,000 sq. ft. dedicated cold coffee production facility at its Portland, OR, headquarters. The company also produces the drink at a smaller plant in Brooklyn. Austin-based Cuvee Coffee is expanding capacity rapidly, too, particularly for canned product. It did so after social media created a “nearly insurmountable demand on the company’s capacity” to make its Black & Blue brand of nitro coffee.

Craft brewers, or those who would like to ease into craft brewing, can try their hand with nitro coffee. All you need is cold brew coffee or coffee concentrate and something like JoeTap’s DIY nitro tap system. But if you’d rather just sell nitro than make it, kegs and cans are the way to go—if you can find a supplier.

Stumptown sells 12 oz. aluminum cans at its company cafes, and they’re available at other coffee shops that source their beans from Stumptown. The cans will soon be available at Whole Foods stores in the western U.S., with a national rollout penciled in for fall:

It retails for $5-$5.50 per can—a breakthrough price point for a grab-n-go drink item. The company also supplies nitro kegs to its cafes and to “key wholesale partners” who sell it on tap.

Cuvee sells nitro coffee in cans and kegs, too, primarily in Texas. It’s ramping up production in a hurry.

“The consumer advantage is, it’s a much more approachable drink than an espresso or brewed coffee,” he tells Edible Austin. “From the retailer’s perspective, there’s no training involved; you teach someone how to pull a tap handle.” Another factor, he notes: “Getting a glass of coffee out of a beer tap…is just cool.”

Who else thinks it’s cool? So far the nitro coffee market consists of coffee connoisseurs, craft beer aficionados and, increasingly, the energy drink crowd. Excess caffeine is an unintended side effect of the nitro brewing process, but its presence appeals to certain market segments. Here’s how Stumptown positions its canned nitro coffee for this latter group:

Stumptown Nitro Cold Brew in a Can from Stumptown Coffee Roasters on Vimeo.

But interest in nitro coffee may turn out to be strongest among the mixologists who work at restaurant bars. With it, coffee-based cocktails gain an interesting mouthfeel and deep flavor notes that just weren’t available before.

For example, at Ration & Dram in Kirkwood, GA, the drink selection includes the Rise ‘N’ Shine, which combines moonshine and vanilla syrup with nitro brewed coffee, and the Jamaican Coffee, which adds Jamaican rum and Amarula fruit cream liqueur to a nitro base. We can’t wait to see what other new drinks mixologists throughout the industry will come up with for nitro.