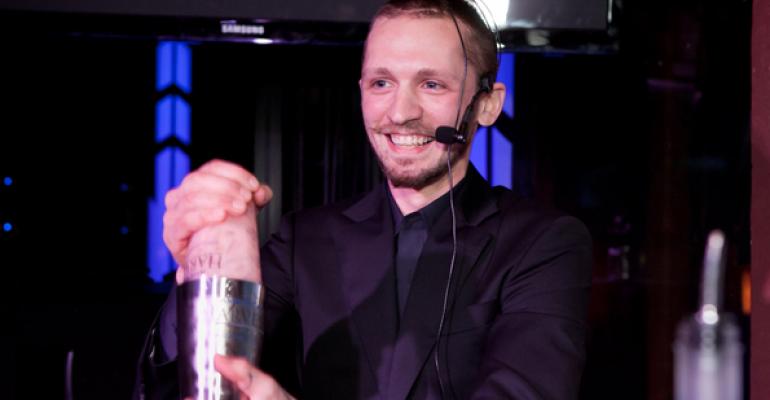 Mixologists looking for some recognition (and a nice chunk of change to go with it) should check out the National Restaurant Association’s Star of the Bar competition.

The fifth annual contest, which features a $5,000 cash grand prize, begins online and culminates at the International Wine, Spirits & Beer Event (IWSB) during the NRA Restaurant Association Restaurant, Hotel/Motel Show in Chicago. Six semifinalists will be selected from all online entries and brought to Chicago to create and sample their cocktail made with Casamigos Blanco or Reposado on the IWSB floor. IWSB attendees will vote to determine three finalists, who will then demonstrate and sample their cocktails to a panel of judges at the annual Restaurant Rocks party on Sunday, May 18, hosted and emceed by TV personality, chef, and food writer Andrew Zimmern.

“Creative use of cocktails and other beverage alcohol is a way for restaurants and other foodservice operations to increase check averages and raise margins,” said 2014 NRA Show and IWSB convention chair Sam Facchini, cofounder and co-owner of Las Vegas-based Metro Pizza. “The annual Star of the Bar Mixology Competition celebrates talented mixologists who contribute to a successful bar program by developing imaginative and marketable cocktails. And it’s a great time for all involved.”

Entries are submitted via online video and recipe submission. An IWSB panel of judges determines five of the semifinalists, with the sixth picked by the general public as the “people’s choice” contender through online voting from April 21-23.

Interested individuals who would like a shot at the title, a trip to Chicago to demonstrate their skills at IWSB, as well as a chance at the $5,000 prize should complete the following:

• Create a video no more than two minutes long, describing and mixing the drink, and upload it to YouTube.

• Submit the online entry form by April 16, 2014, including a link to the video in the recipe instructions.