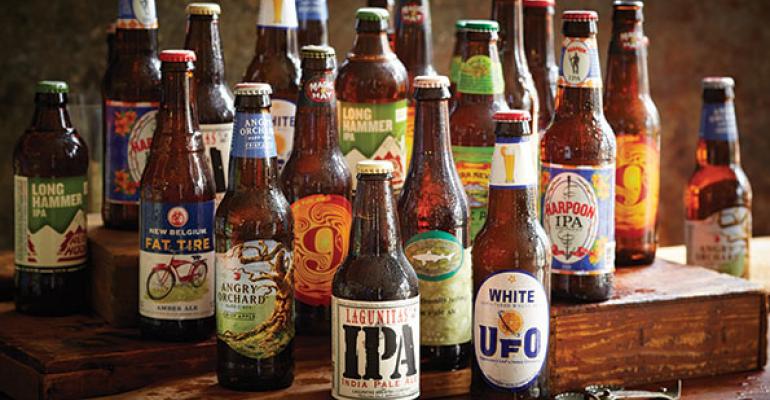 Part of the reason you didn’t open a franchise restaurant is because you wanted some individuality. You wanted to serve food and drink tailored to you and your locale, not a cookie-cutter menu that doesn’t allow for much customization.

In the kitchen, your creativity is most likely still giving you a leg up over the chain restaurant down the street. But at the bar, that chain restaurant is now taking a page from your playbook and getting crafty with its beer offerings. Chain restaurants are increasingly opening up their drink menu options and partnering with local microbreweries to bring a local vibe into the bar.

“We have over 40 beers, including 20 American craft brews—seven of which are rated 90+ from Beer Advocate,” he says. “We also have over 40 variations of spirits that are available in every Smokey Bones restaurant, and our cocktail menu is constantly evolving with changing beverage trends.”

It appears chains are finally getting hip to what many have known for years: It’s all about the microbrewery. Of the $100 billion in annual U.S. sales of beer, $14.3 billion is from small and independent craft brewers (compared to just $36 million for wine), according to the National Brewers Association. While overall beer sales are down slightly year over year, craft brew sales are growing at a nearly 20-percent clip. With 3,200 craft brewers in America, craft beer is quickly becoming an expected addition to all restaurant beverage menus.

Tony Roma’s will use the craft beer surge as a catalyst in its new restaurant concept called TR Fire Grill, which the company plans to expand throughout the U.S. TR Fire Grill is aimed at Millennials with locally sourced food, handcrafted cocktails and a hipster atmosphere.

TR Fire Grill is “trying to grab those millennial diners who are looking for a more unique restaurant experience,” the company says.

Your Pie, a 19-unit fast-casual pizza chain based in Athens, GA, takes a similar approach. Founder Drew French says its big push for the past several years has been sales of craft beer.

“We’ve actually rebranded our four walls and how we position beer and wine at the stores to be a much more focused effort,” he says. As a result, although most locations have alcohol sales in the 5-percent range, some see shares in the double digits, and one of two Savannah locations racks up 20 percent of total sales in alcohol. “We’ve made a real strong focus on educating both our staff and customers,” he says.

That includes teaming up with local craft brewers and offering their beers on tap so they can offer samples of them to guests while explaining how different beers pair with pizzas.

Darden upped the ante in 2012 when it purchased the Yard House chain for $585 million. Yard House maintains a huge menu of local beers with pint prices $1 to $2 higher than you'd find at local brewpubs, but hopes to point drinkers toward those breweries.

Craft beer does present some challenges in the fast-casual space. Since fast-casual employees aren’t tipped, they have little incentive to upsell beverages. And many are also younger than 21 years old, so they can’t serve alcohol in the first place. In addition, since guests are ordering at the counter and taking their meal back to a seat, few are going back for a second beer.

But as fast-casual chains innovate and try and capture more dinner business, beer will definitely become more of a factor.