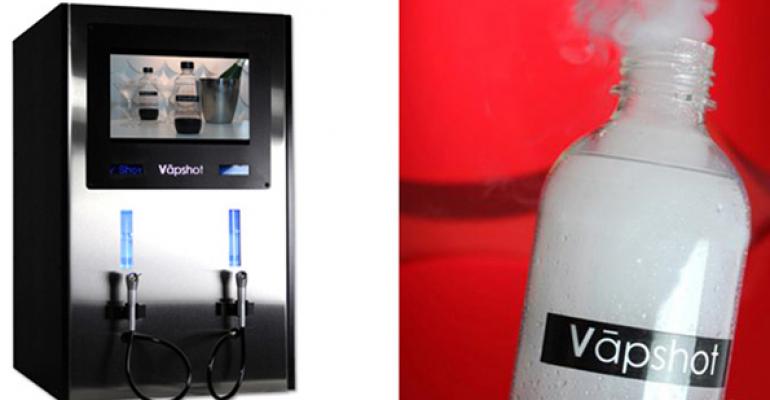 Ready to put cutting-edge cocktail technology to work in your restaurant’s bar? We’ve got two options you may wish to check out: Vapshot and Palcohol. Either product should bring at least some short-term energy and excitement to a restaurant’s bar scene—perhaps more than some restaurants might want—and could also deliver a jolt to the operation’s bottom line.

The makers of Vapshot bill it as a vaporized spirits system that provides a healthy, safe and fast way for customers to consume alcohol. Customers don’t drink the alcohol; they inhale it. Because the alcoholic vapor enters the bloodstream quickly through the lungs, instead of passing through the stomach and liver, the effects are felt almost immediately. Touted benefits of this method of alcohol ingestion include near-zero calories and no hangovers.

The Vapshot machine, which costs $4,000, is versatile. It can produce vapors only, vapors plus a drinkable shot of liquor or a mixed drink. In a way, it’s an industrial strength version of the Vaportini device, which also produces alcohol vapors and can be purchased on eBay for around $35. Same idea, but the Vaportini, which uses a standard tea candle as its heating device, may be way too slow for use in a busy bar, or even in a not-very-busy bar. The Vapshot is designed to handle crowds.

Why would a restaurant want to install something as crazy-sounding as the Vapshot in its bar? Consider this line from the company’s marketing materials: “Due to the efficiency of the system, up to 1,500 Vapshots can be produced from a single 750ml bottle of 80-proof alcohol.” Which is to say, the pouring cost for vapor shots produced by this alcohol delivery system would be almost infinitesimal, roughly $.01 cents a hit.

There may be more customers interested in vaping alcohol than some operators might assume. In an era when e-cigarette devices have had a major impact on the tobacco industry and hipsters still like to hit the oxygen bar, the idea of going out on the town to inhale something has become a near-mainstream behavior. You can read all about the vaping market in publications such as Vaping Press magazine, Spinfuel eMagzine, VPR magazine, Vape News magazine and ESM (Electronic Smokers Magazine). Collectively, these publications suggest that vaping has become a lifestyle and a culture for some.

The Vapshot, which drew big crowds at this year’s Nightclub and Bar Show in Las Vegas, is on the market right now. But you’ll have to wait a few months to experiment with Palcohol. The U.S. Alcohol and Tobacco Tax and Trade Bureau has withdrawn its initial approval of this powdered alcohol product. It should be available by fall.

Powdered alcohol is not a new concept. General Foods Corp., the maker of Jell-O and multiple other branded food items that is now a subsidiary of Kraft, patented a method for creating powdered alcohol in 1974. Somehow, the company did not foresee the future popularity of Jell-O shots in bars.

Palcohol brings contemporary marketing sensibility to the idea. Its initial product line will include vodka and rum, plus four varieties of add-water-and-stir cocktails: Cosmopolitan, Mojito, “Powderita” and Lemon Drop. It’s targeted at on-the-go consumers who prefer the DIY approach to cocktail making.

The product’s portability is its key. But who knows what kind of imaginative drinks a professional mixologist could come up with using this product? Pastry chefs may figure out how to make cool new boozy desserts. And Palcohol thinks the product could turn up elsewhere on restaurant menus, too.

Here’s how the company addresses that possibility on its website:

“Can Palcohol be added to food? Beer, wine and spirits are often added to dishes to enhance the flavor. When you add Palcohol to food, you're not really adding flavor to the dish, just alcohol. We've been experimenting with it, adding Powderita powder to guacamole, Cosmopolitan powder on a salad, V in a vodka sauce, etc. It gives the food a kick.

“As Palcohol is a new product, we have yet to understand its potential of being added to food. As always, please use it responsibly. Because it adds alcohol to the dish, do not serve the dish to minors.”

Palcohol’s makers say its initial approval was quickly withdrawn by regulators due to labeling issues. Right now, the product is good to go, but the labeling is being reworked.

It’s difficult to predict whether the Vapshot machine or Palcohol will find commercial success in the restaurant world. But if your restaurant and its bar program are open to experimentation, this could be your chance to cash in on what could be an emerging trend.