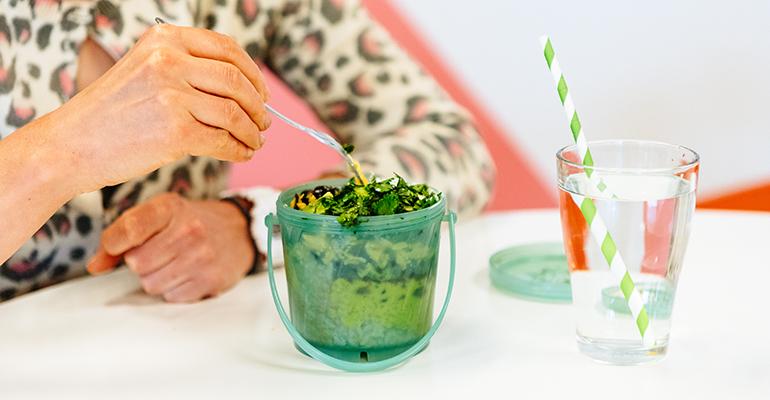 California bill clears path for guests to bring their own cups, containers

A new law in California makes it easier for restaurants to allow reusable takeout cups and containers brought in by guests, part of an ongoing effort to reduce dependence on single-use plastics.

California’s bill reflects a trend that is growing across the country. Following activists’ advice to “reduce, recycle and reuse,” an increasing number of disposables-hating guests are bringing their own reusable containers. Some restaurants have encouraged the practice — particularly for cups.

Others, however, have held back out of concerns about the potential for cross-contamination as guests hand over cups or containers that may have been bouncing around the floors of their cars or tainted by other less-than-sanitary conditions.

“Some restaurants were doing it, but most were not because of those concerns about cross-contamination,” said Matt Sutton, senior vice president, government affairs and public policy for the California Restaurant Association.

Sutton said the intent of the bill is to clarify how restaurants can safely allow reusables if they choose — and it reinforces that such practices are voluntary.

“A restaurant doesn’t have to accept these containers, but if they want to, there’s no responsibility on the restaurant’s part to clean and sanitize them,” he said.

Assembly Bill 619, signed by the governor on July 12, establishes a procedure: Restaurants must isolate the consumer-owned container from the serving surface or sanitize the surface after each filling. Restaurants must also have a written policy for prevention of cross-contamination available for inspectors.

The new law also opens the door for reusable containers at temporary food facilities, such as those used at events and festivals, which previously were required to use only disposables. Now local health departments may allow multi-use utensils and dishes to be used at temporary foodservice sites if they are cleaned, rinsed and sanitized on site or at an approved facility.

Sutton said it remains to be seen whether the law will encourage more use of reusables.

Meanwhile, a growing number of companies are positioning for a world where diners order takeout and reuse or bring back cups and containers, rather than tossing them into the trash.

Portland, Ore.-based GO Box, for example, creates city or community-wide programs where restaurants use durable plastic takeout containers that guests can return to designated collection spots for sanitation and reuse. The company operates in Portland and San Francisco, and will soon launch pilot programs in New York City. 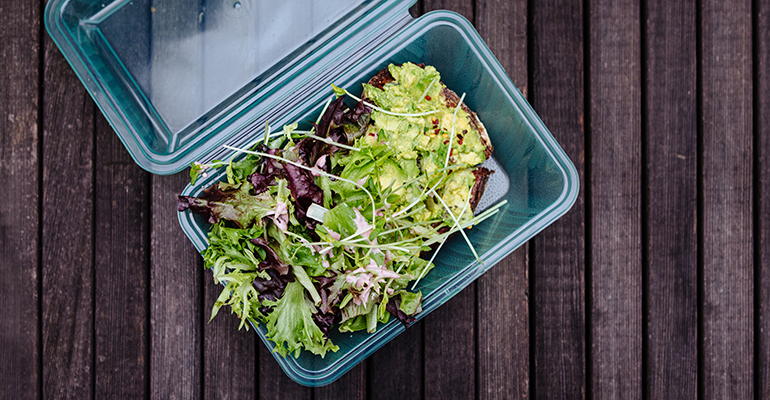 Restaurants can serve their takeout food in GO Box containers and guests return them to a drop off point so the containers can be cleaned, sanitized and delivered back to the restaurants.

More than 90 food vendors have signed up and there are 40 drop off sites around the city, and about 3,500 users. Those users pay a subscription fee, which starts at $21.95 per year and has various levels.

Jocelyn Quarrell, GO Box’s owner and CEO estimates the program has eliminated about 225,000 single-use disposables from the waste stream. 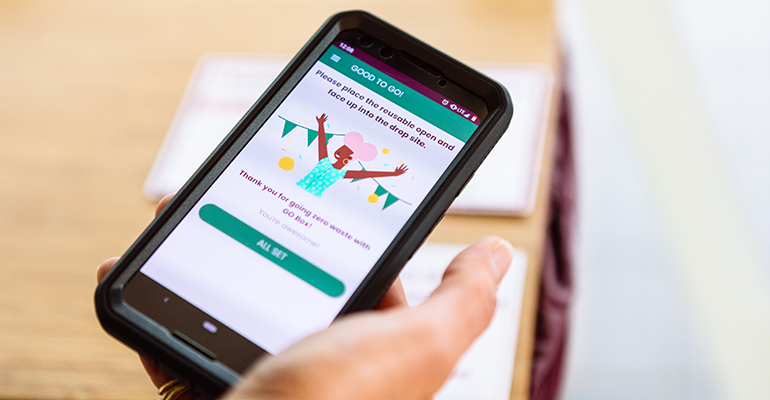 In the next few months, GO Box will be tested in New York City. In one pilot, a restaurant chain Quarrell said she cannot yet reveal is developing branded containers for reuse. Quarrell said costs vary for such programs, but the initial fee is around $8,000 for the tools and materials with ongoing licensing and revenue-based fees.

In New York City, health officials said they are fine with restaurants using reusable/refillable containers if they commit to washing and sanitizing those containers between use. But only two concepts in the city — the chain Just Salad and the two-unit Lighthouse in Manhattan and Brooklyn — have health department permission to handle consumer-owned containers.

That’s because both have specific procedures in place for preventing cross contamination.

New York-based Just Salad, for example, has offered a branded reusable bowl since 2006 in a program the chain estimates saves more than 75,000 pounds of plastic each year. At the chain’s roughly 30 locations, guests can buy the $1 reusable bowl and receive discounts each time they bring it in. 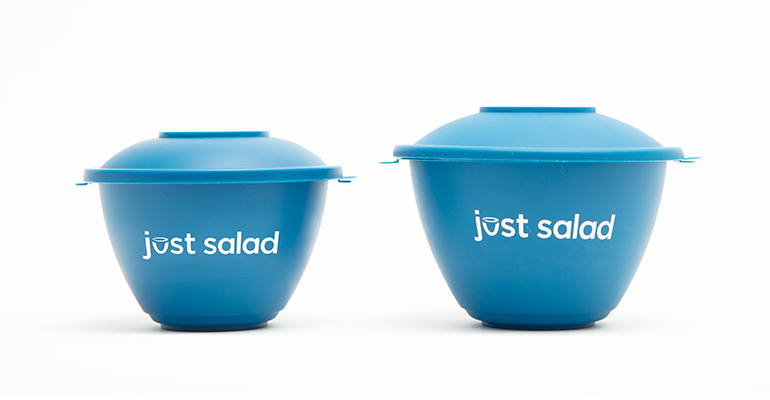 Guests place their reusable bowl on a black plate on the countertop. Workers handles the bowl with gloves and refill it using tongs, returning it to the black plate — which is then washed and sanitized after every use.

Lighthouse co-owner Naama Tamir said she hopes to see reusable containers become a part of culture. Many people now carry their own refillable water bottles, she said, and the same could be true for food containers.

At her restaurants, consumer-owned containers never enter the cooking area but are filled at the counter, and she’s “not terrified” about cross-contamination. She’s more concerned about the need to reduce waste and hopes to see the city build infrastructure for wider adoption of reusables.

“It really has to be a cultural shift,” she said. “For these things to work, it has to be seamless for the user, it should involve a beautiful container, something that’s chic and sexy. … You want it to be something that feels special, that makes you want to keep it.”

Elsewhere, more restaurants are encouraging guests to bring their own containers.

The website TakeOutWithout.org lists restaurants that allow guests to bring reusables. Most are in Canada, but a handful of U.S. restaurants have joined the ranks, including Blenders and Bowls, a five-unit smoothie chain in Austin, Texas.

Lauren Webb, manager of a downtown location of Blenders and Bowls said the policy was in response to customer demand, with roughly 10% to 20% of guests bringing their own cups and containers, though the chain doesn’t really promote it.

“We had a lot of people asking for it,” she said. “We’re near a yoga studio, so people often have their mugs or containers with them already.”

Others are looking at more closed-loop settings for reusables. 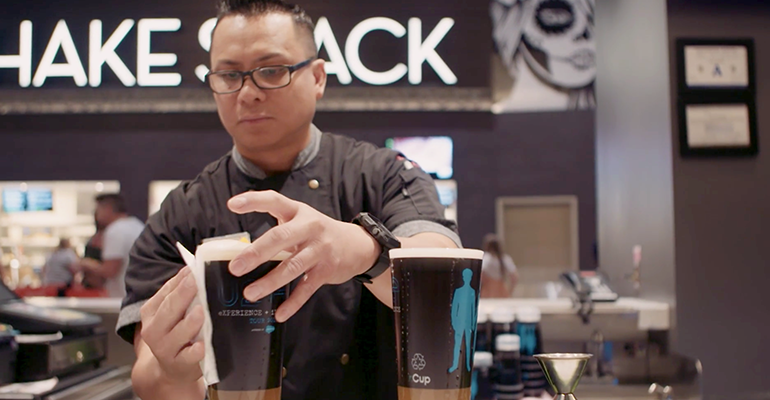 At St. Augustine Amphitheater in St. Augustine, Fla., for example, roughly 9,000 plastic cups were used at sold-out events at the 4,700-seat outdoor, oceanside venue. This concert season, however, St. Augustine became the first to launch the use of r.Cups.

Guests can put a $3 deposit on a durable plastic cup they use throughout the night. They have the option of keeping the cup as a souvenir or returning it at the end of the night to get their deposit back. The cups are sanitized and reused for the next show’s concessions.

Dianya Markovits, St. Augustine’s public relations, said the program has reduced the number of garbage bags at the end of the night from about 16 to four.

“This is here to stay,” she said, noting that the program will be expanded to a second sister venue. “It’s about how do we start being better stewards and reduce our waste.”