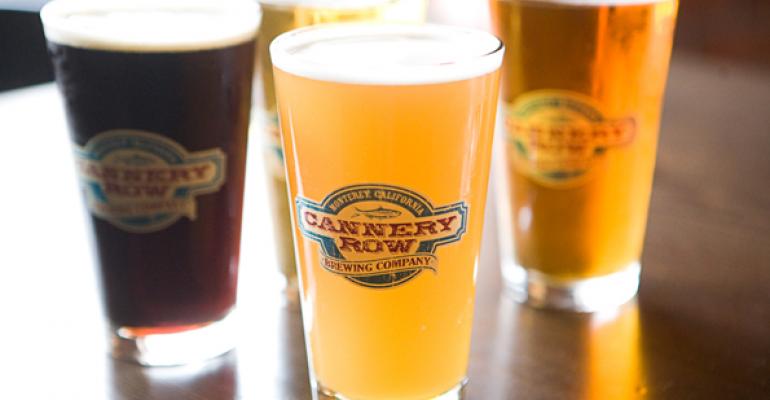 8 tips on how to better match beer with food

Talking to a chef in Northern California about pairing food and beer seems a little strange, but that’s just how far craft beer has come. Even just outside wine country, there’s more than enough room for a place like Cannery Row Brewing Company in Monterey, CA. It offers more than 70 beers on tap, mostly local and almost all of the craft variety, and part of new executive chef Daniel Furey’s job is matching his food to the beer.

He’s revamped about half the menu in his six months there, but he knows his target audience. “It’s fairly casual and beer oriented,” he says. “It’s a super busy restaurant and exciting because they’re really into food, too. We do an updated version of classic American comfort food.”

A favorite example, he says, is the Smoked Beer Can Chicken. It’s a half chicken with red eye gravy, braised collard greens, bacon and tobacco onions. “It’s a good Southern down home meal,” says the Connecticut native, adding that a smoky porter is the ideal companion for it.

Pairing beer and food isn’t all that different from the approach you take with wine. Furey says it’s critical that bartenders and servers at beer-forward restaurants are prepared to help customers.

Here are eight tips from Furey on how to better pair beer with food:

1. Bitter beers can work with bitter food, like pairing an IPA with an endive salad. The balance helps bring out the other flavors from both.

2. With a barbecue dish, you can go two ways: A porter, something that’s got a smoky flavor, pairs well with a smoked brisket. Or, if you’re having barbecued ribs, a lager could work well. Sometimes something simple—crisp and clean—can be a cool complement to a spicier dish.

3. You don’t have to pair everything. Steak doesn’t really need a specific beer match. Drink whatever you like with it, just avoid something on the opposite end of the spectrum, like a strong beer with a coffee flavor or a triple IPA.

4. With burgers, you can get away with almost anything. Or you could match the beer with the toppings, but the burger itself is really the perfect medium for beer.

5. Don’t be afraid to pair beers with dessert. Stouts with chocolate and coffee flavors or beers brewed in bourbon barrels are great options, and a nice saison works well with a custard or citrus-flavored dessert.

6. A saison can also be approached like a European chardonnay. It almost has some green in there, he says, and a light bubble and crisp flavor. You don’t want to kill that with the food, so fish tacos pair well. Match something that will balance and heighten the flavors in both the beer and food.

7. Don’t kill your food with beer. Those “super crazy beers” that are ultra strong will overpower most dishes.

8. What makes an appetizer beer friendly? “Something not totally fried, but that will open your palette and isn’t as fat forward,” Furey says.