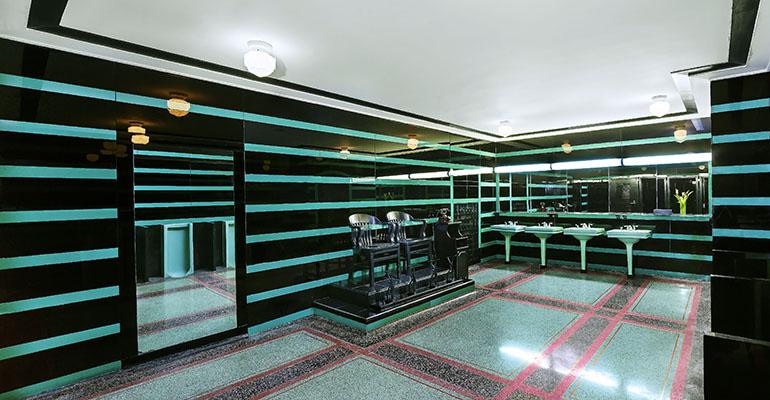 Restaurants inject experiential design into the most private of spaces

There is a new brand of customer moving the restaurant industry away from function over form; guests who want a photographable moment — even in the rest room.

For many restaurants, this has resulted in a wave of experiential restrooms that have achieved Instagram fame — sometimes outshining the restaurant’s food, drink or dining room — and designers have taken note.

At the vegan fast-casual concept By Chloe, based in New York, for example, the design of restaurants has been embraced as a key point of differentiation.

“We noticed that some vegan restaurants had a signature look with more of a darker color scheme and woodsy feel to them, and we wanted to be different,” said founder Samantha Wasser.

Focusing on each location individually rather than multiplying their original design across all units, Wasser said she “wants the bathrooms to have a ‘wow’ moment.

“For each bathroom, we select two different wallpapers — one for the walls, one for the ceiling — and not one bathroom has ever been the same,” she said. 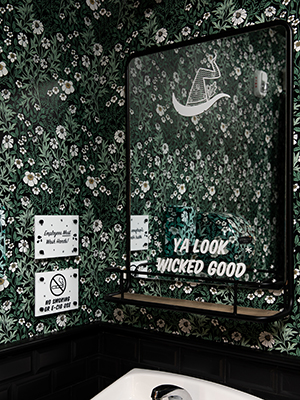 At their Fenway location near Boston, the wallpaper is red-and-white striped, while in Providence, R.I., the walls are papered with a design inspired by the former TV show “Saved by The Bell.”

As for the impulse to take photographs, Wasser noticed the hashtags from their restaurant trending online and decided to work with it rather than against it. They began playing around with expressions on their bathroom mirrors, which also vary by location. In New York’s Seaport district, the mirror reads “I SEA You Lookin’ Good,” and in Boston it’s the more regionally inflected, “Ya look wicked good.”

Wasser said the social media attention “encourages us to think of more funny puns for each location.”

In 2018, some of the finalists included the restaurants Barrio in Chicago, a bathroom noted for its disco ball and a hot-pink ceiling.; Mi Vida in Washington, D.C., where guests are treated to a colorful bathroom palette; and The Progress in San Francisco, where customers are greeted by 250 pounds of glitter that creates an inhabitable cube of sparkle.

A restaurant’s restrooms can also become part of its legacy.

At the Hermitage Hotel in Nashville, once frequented by notable guests such as President John F. Kennedy and Elvis, the men’s room is a tourist attraction for both men and women with its retro shoe shine station. Famous beyond social media, this restroom has been featured in wedding photos and news stories — even a photoshoot with Jack White of the White Stripes. 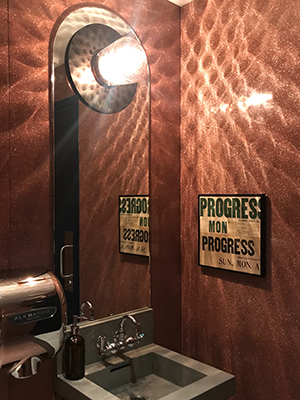 Originally designed with white tiles on both the walls and floors, the restroom was renovated in the 1930s with the current color scheme of green and black glass tiles, evoking the Big Band Era and classic art deco design.

Within the quick-service segment, restroom design has traditionally focused more on function over form, especially for larger chains that are likely replicating the restaurant design in multiple locations.

In some cities, the question of public access to restrooms in restaurants has been a challenge.

Starbucks came under fire last year after a manager denied two African American men access to a bathroom, and the resulting backlash led to changes in chainwide policy to ensure toilets were open to all, even those who had not made a purchase.

In other cases, local and state laws can impact restroom design.

For instance, New York state requires restaurants to provide customers with a restroom if there are more than 19 customer seats. But there are no laws requiring that restrooms be open to the public unless a customer presents a legitimate medical need.

But several states, including Illinois, Texas and Oregon have passed laws requiring that customers have access to employee restrooms where there are no public options.

Generally, a restaurant is required to have one restroom for every 30 women and every 60 men, though it differs from state to state. In California, for example, restaurants with a single occupancy restroom must be designated “gender neutral” and described in similar language on the doors and all subsequent signage. 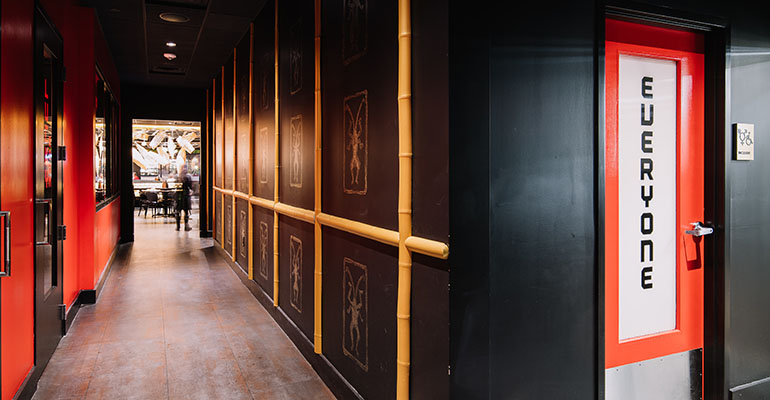 For some restaurants, the restroom is an extension of the brand.

Morimoto in New York, for example, is known for its modern Japanese menu, but also for its culturally appropriate bathroom.

Architect Tadao Ando used Japanese appliances in the space, namely the Toto Washlet, which is a fully automated bidet capable of washing and drying the customer off with the touch of a few buttons. The experience in the bathroom is touch-free, reducing exposure to germs and increasing the minimalist design as there is no need for paper towels or toilet paper.

The bidet toilets have lids that open automatically as users enter the stall, and, once business is done, give guests the option of a front or back wash, drying and temperature-controlled seat.

Ando also added mirrors to create the illusion of never-ending space. Cherry blossoms in the mirror appear to make the glass look lit from within as the blossoms echo through the reflections.

Comments on online review platforms reveal how important restaurant restrooms are to consumers.

According to a survey conducted by Harris Interactive in collaboration with Cintas, 94 percent of U.S adults say they would avoid a business if the restroom was dirty. The same study found that if they were dissatisfied by the cleanliness, they were more likely to leave a negative review, effecting the restaurant’s future business.

For customers desperate to find a clean restroom, there’s an app for that. Cintas last year rolled out the app “Got to Go,” which gives consumers the ability to search for restrooms in their vicinity based on customer reviews, singling out the cleanliness of restrooms.

Still in beta testing, Japanese toilet manufacturer Toto is working on a network of devices that contain software to connect and exchange data, essentially creating bathroom fixtures that will report usage, among other things.

The technology is linked with each element of the bathroom — toilet, sink and various products — to report back not only usage but quantity.

An alert can be sent to the mobile device of the person on staff in charge of the restrooms, for example, alerting them that toilet paper is low. The technology even has the ability to track, in a single stall, when a toilet was flushed and a sink was turned on in the immediate follow up.

“In foodservice, you want to make sure that when your crewmember from the restaurant is in to use the bathroom that they’ve gone in, there’s been a flush, and they’ve washed their hands,” said Strang.