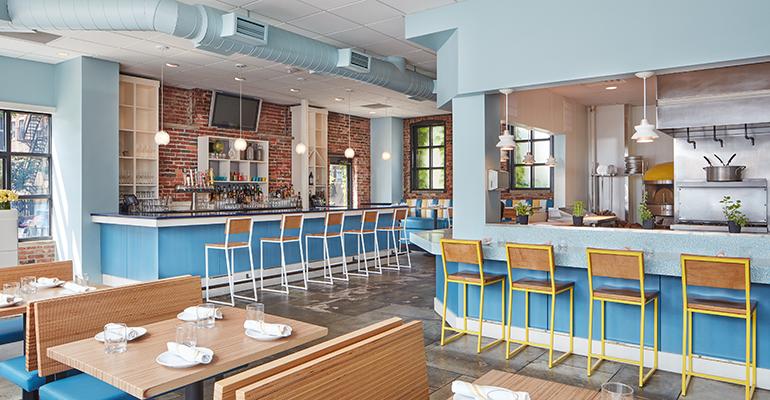 How to reinvent open kitchens

Let diners see only the most appealing parts of your kitchen

More than ever, the open kitchen is becoming a hallmark of good restaurant design. Following on years of success for chef’s tables in foodie establishments — and the more recent push for transparency at a range of restaurants from quick service to haute cuisine, owners are exploiting the appeal of merging kitchen and dining areas. Plus, there’s the entertainment factor: The kitchen’s action and sensory appeal adds to the thrill and appeal of dining out.

As long as the customers don’t get too much of a good thing, that is.

In fact, as open kitchens proliferate, too many are violating some basic rules of comfort and enjoyment in dining. Unwanted noise, fumes, and views undermine some new venues. Others have run afoul of health codes and building rules, or they’ve under-designed the open kitchens, necessitating corrective retrofits of equipment or protective separations, sometimes undermining their original intent.

The key to successfully planning and outfitting a crowd-pleasing open kitchen is to start with the intent, careful execution, and a full understanding of kitchen and dining area operations. In some cases, the focus is the original 1990s upscale notion: Customers are firsthand witness to a live-action reality event, better than a cooking show, as at Boston’s Tapestry, designed by Dyer Brown.

For chains such as Chipotle and Subway, open kitchens reveal their fresh food prep to all. Among the most established formats, sushi bars combine entertainment and transparency with an intimate connection to the chef. At some chef’s tables and open formats, restaurateurs showcase food preparations for live audiences and even offer samples. A seminal example of a restaurant offering patrons transparency and the appeal of merging kitchen and dining areas. Photo: Hamish Cameron

Step one is to align the open-kitchen goal with menu, the interactive experience, and customer group’s sensory expectations. Second, since building or renovating for an open kitchen is a big decision, make sure it’s the right format. Ask a few key questions: What specific activities will be showcased, and where? Should customers see everything — including prep work and dishwashing — or just the sauté line and salad station? Is it possible to keep noise to a minimum and ensure proper ventilation? Will the bright lights needed in the kitchen area encroach on the dining area’s cool atmosphere?

Third, consult with experts on health, building and fire-safety code. The layout should maintain a minimum distance between food preparation and patron zones, mainly to prevent contamination. Locations and heights of transparent sneeze guards and partitions are determined to shield kitchen areas airborne contaminants.

Cleanliness and organization are essential to both layout and operations. In the open kitchen, everything is on display including pots and pans and raw ingredients. Yet even more important is creativity — there’s a lot you can do with the theatricality, intimacy and authenticity that comes with an open-kitchen restaurant.

Layout. Consider the kitchen presentation: Is it surrounded by seating as in a thrust stage, or framed like a proscenium theater, as at Tapestry? Or is it a buffet-style line, or a bar like McMahon Architects’s design for Townsman, or a peekaboo series of openings and portholes, or a big open hearth like at Camino restaurant in Oakland, Calif.? Whatever the concept, savvy owners work closely with architects and equipment consultants on layouts that fully reflect day-to-day functionality as much as experiential intent.

Red Bird restaurant in Waltham, Mass., for example, incorporates a glass screen that runs perpendicular to the cook line as a way to hide not only the side of the hood, but also some messier areas of the kitchen. Attached to the bottom of a soffit, the screen helps contain some noise as well, without holding back any of the chef’s energy.

Granular decisions then complicate the picture. Many appliances have both open and closed positions, and some may impede views of patrons and dining areas. Some equipment is beautiful and becomes central to the design, such as a large stainless-steel wood-fired brick oven, or the matching stainless-steel vent hood, warming lamps and pots hanging at Townsman restaurant.

Lines of sight also impact both seating arrangements and cooking stations. Linear, angled and curving counters may be considered to maximize views and drama. In many cases, the position of existing plumbing and gas lines will limit flexibility or the cost-effectiveness of some arrangements.

Lighting. Among the key areas where open kitchens underperform is in reconciling the bright work lights of the kitchen with the mood lighting that creates a warm, relaxing environment in dining areas. Great restaurants combine chef task fixtures with theatrical lighting — so the kitchens visually pop — contrasting with a mix of dimmable ambient fixtures along with decorative fixtures at or above tables, for example.

At Townsman, for example, our design balances out bright fixtures inside the expo kitchen with big, decorative pendants over the dining counter, just outside. This technique tricks the eyes with its bright band of light, preventing the kitchen’s utility light from overpowering the customer zone. In general, restaurant operators are migrating away from fluorescent and incandescent kitchen lighting, which can be harsh and disruptive to patrons. Instead, LED lighting in the open kitchen can be carefully tuned for optimal function while creating a warmer feel. In addition, many use architectural elements, such as screens and soffits, to prevent light from bleeding into the dining room.

Sound. What should the open experience sound like? Is the restaurant format inherently noisy? Some chefs like to challenge their teams to prepare meals with Zen-like quiet and subtlety, while others, well, not so much.

In either case, architects can work to design the open kitchen location and presentation to reduce noise. Acoustic separations, floor treatments and perforated metal ceiling tiles are important but rarely enough to cut down on all the noise produced during a busy rush. It is helpful to train the team and locate noisier stations such as dishwashing behind the scenes. Prep work and cleanup can be separated from the chef’s area or open cook lines, in some cases.

Ventilation. Wherever food is prepared, witnesses enjoy a variety of fragrances, for the good and for the not-so-good. Layout and mechanical system design, such as exhaust fans, are the two key strategies (other than menu decisions) for controlling smoke, steam and more potent smells. The mechanical systems should be robust enough to draw out both smells and excess heat that may be unpleasant for patrons.

Mastering these technical facets of open-kitchen venues will help facilitate the proprietor’s vision for a dramatic, edifying and transparent restaurant experience. Start with the basics — the creative concept and sensory expectations — and the design solution is well on its way.

Brent Zeigler is president and director of design for the hospitality architecture and interior design firm Dyer Brown and Katie Bean Gordon is interior designer and Restaurant Design Lead for Dyer Brown.

An earlier version of this story misstated the designer of Townsman restaurant. It was designed by McMahon Architects.
0 comments
Hide comments
Recommended Reading