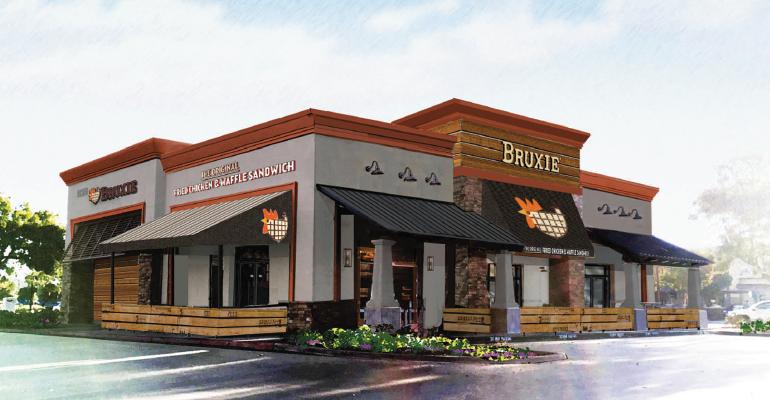 Bruxie
The rendering of the remodeled unit in Irvine, Calif.
Operations>Design

The fast-casual Bruxie waffle sandwich chain is preparing for growth with a new prototype design and a new positioning as the home of the original fried chicken and waffle sandwich.

Bruxie was founded in 2010 and got an early boost in 2013 with a minority investment from private-equity firm L Catterton. In September 2016, however, L Catterton became the majority owner after a new round of financing. The chain now has seven locations, mostly in Southern California.

With the deal, co-founder Dean Simon stepped down as CEO and was replaced by Anthony Smith, the former president and partner in the casual-dining chain Paul Martin’s American Grill. Simon remains an investor.

Co-founder Kelly Mullarney remains involved in day-to-day operations as chef. In a statement, Mullarney said, “The experience and wisdom that comes with our new management team are integral to taking this brand to the next level.”

A 2013 Breakout Brand by Nation’s Restaurant News, Bruxie has also reworked the menu to focus the concept more specifically on what has been the top-selling sandwich: fried chicken and waffles.

The move is an attempt to solidify Bruxie’s position within the increasingly competitive world of chicken sandwiches.

Bruxie is unique with a wide-open canvas, said Smith.

“There were the burger wars and the pizza wars. Fried chicken is another staple that we all eat,” he said. “Most Americans don’t fry chicken at home anymore. You go out to eat fried chicken, and that’s where the opportunity lies. We serve it on a waffle. No one else is doing that out there.” Bruxie has positioned itself as the home of the original fried chicken and waffle sandwich. Photo: Bruxie

Bruxie, which moved its corporate headquarters from Anaheim, Calif. to nearby Santa Ana, is also remodeling an existing unit in Irvine, Calif., which will serve as a new prototype for future locations.

The new design “screams chicken and waffles,” said Smith. “It’s a little more sophisticated. It’s comfortable and engaging for customers, and we’ve opened the kitchen up.”

The chain is also scheduled to open its first international location in South Korea in April, the first in a 10-unit franchised deal over the next five years. The franchise partner is Bold 4 Ltd.

Franchising in the U.S. may come down the road, but not for two to three years, said Smith.

Corporate growth is planned, but the focus now is on getting the new prototype open, also scheduled for April. With that will also come the roll out of delivery service, online ordering and digital menu boards.

“We’ve predominantly been a lunch-driven business, but we think the new design will increase dinner business,” he said.