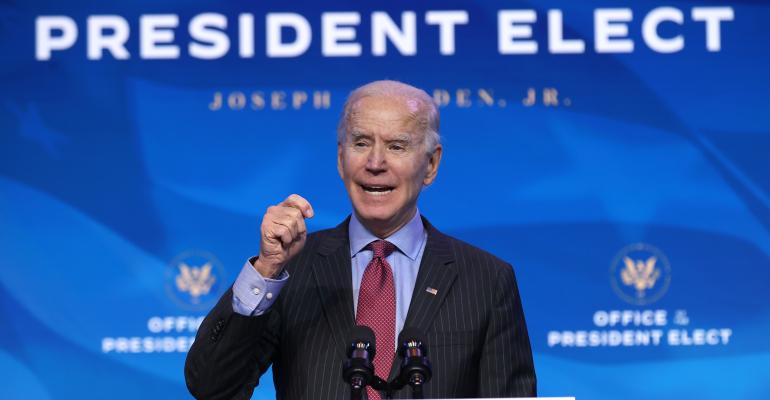 Biden addressed a range of workplace issues in Wilmington, Del., while announcing his final cabinet nominations, which included Rhode Island Gov. Gina Raimondo for commerce and Boston Mayor Marty Walsh for labor. Biden is to be inaugurated on Jan. 20.

“People in both parties now recognize it’s time to raise the minimum wage so hardworking people earn at least $15 an hour,” Biden said in remarks. “No one who works 40 hours a week in America should still live below the poverty line. They are entitled to a minimum of $15 an hour.”

He noted that Walsh, who served as president of Laborers Union Local 223 before being elected Boston’s mayor, had advocated for a $15 minimum wage and paid family leave.

Odds for a minimum wage increase were raised, Biden said, with the declared Democratic candidate wins early this week of two Senate seats in Georgia, providing his party with slim majorities in both the Senate and the House.

"Restaurants, bars and the hospitality industry have been slammed by the virus,” he said. “We will direct relief to these businesses and others that have been hit hardest. We owe them that support to help them get through the other side of this crisis."

Federal relief packages need to be expanded, he said.

“The bipartisan COVID-relief package passed in December is an important step, but just a down payment,” Biden said. “Next week, I will be laying out the groundwork for the next COVID economic relief package that meets this critical moment for our economy and country.”

Biden said the economy needed more direct relief to families and small businesses as “$600 is simply not enough when you have to choose between paying rent or putting food on the table and keeping the lights on.”

The president-elect said he would also focus on small businesses and “how to correct the current administration’s failures to get relief to Main Street small businesses that are most in need.”

Calling mom-and-pops stores the backbone of the U.S. economy, Biden said one in four small business are closed and at least 400,000 kare closed permanently.

But problems with the relief packages left small businesses out of relief access.

“Mom and pop shops were often last in line, while big, well-connected businesses jumped in front of the line and got more relief and got it faster,” Biden said.