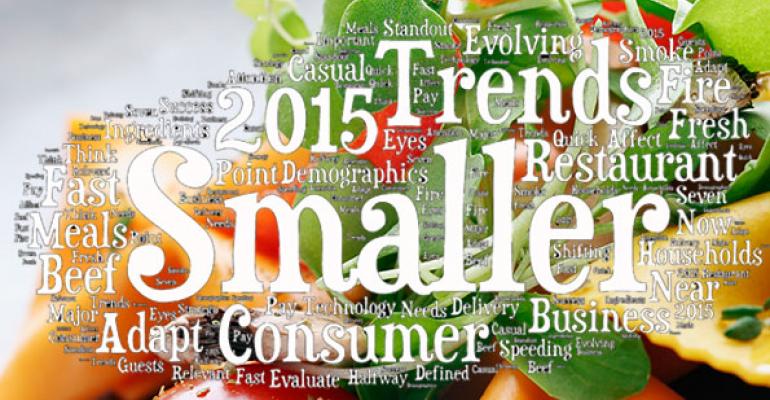 To stay relevant, restaurant operators know they need to adapt to shifting consumer trends. Here are seven recent developments that we expect to have a major impact on the restaurant business in 2015.

1. Evolving consumer demographics
U.S. consumers’ eating behaviors are evolving, and to learn about where they might be headed next, simply take a closer look at U.S. demographics. According to the NPD Group, the growing influence of Hispanics, Millennials going through life stages, aging boomers and smaller households are driving a shift in what and how consumers eat.

The U.S. Hispanic population is growing exponentially and in 2014 U.S. Hispanics grew restaurant visits while non-Hispanic visits declined. Based on its sheer size, as Millennials go, so goes the food and foodservice industries. They like fresh, less processed food, which has played out in their preference for fast-casual concepts. While shrinking in size, the Boomer generation is still too large to ignore, NPD says. Offering healthier fare is a key for this group.

2. Smaller households, smaller meals
A record 27 percent of all households now consist of just one person—the highest level in U.S. history, according to the U.S. Census Bureau. Smaller households in general are leading consumption behaviors in the U.S. to become less household-oriented and more individualized. NPD says the rise in solo eating and drinking occasions has wide-ranging implications for restaurants in terms of seating design and menu development.

3. Fresh ingredients a must
From 2003 to 2013, consumption of fresh foods—fruits, vegetables, meat, poultry, fish and eggs—grew by 20 percent and the youngest generations, Generation Z and Millennials, are driving the trend, NPD says. In addition to eating more fresh foods, Generation Z and Millennial consumers also opt for more organic foods. Fresh ingredients and freshly prepared items are big factors driving growth in the fast-casual segment.

4. Fast casual is where it’s at
Speaking of fast-casual success,  the fast-casual brands continue to dominate Technomic's Top 500 Chain Restaurant Report, with collective annual sales in the segment growing 12.8 percent to $30 billion in 2014. That growth rate was nearly double the next-largest increase from any other restaurant segment, Technomic says.

5. Forks over knives
Three-fifths (62 percent) of general-population consumers say they consume meals without beef, pork, chicken or turkey at least once a week, according to a Technomic report. Among those who eat vegetarian or vegan entrées, younger consumers are more likely to follow a vegetarian or vegan diet.

6. Where there's smoke, there's fire
Hungry for layers of flavor and experimental dining, consumers are seeking the flavors of fire–charred, flamed, wood-grilled, fire-roasted and smoked, according to FONA International, a full-service flavor company. Smoking techniques give diners the experience they are looking for, offering sensory cues including a smoky aroma, charred texture, grill-marked presentation and of course, woody flavor and taste.

Smoke has recently moved past traditional savory dishes into other categories like cocktails, desserts and snacks.

7. Technology speeding delivery
Food delivery platforms like GrubHub.com and Instacart.com are revolutionizing the way consumers eat food at home and blurring the lines between restaurants and grocery stores, according to a report from Boston University's School of Hospitality Administration.

The report suggests personal shopper that can now order delivery from grocery stores may do so in increasing numbers, cutting into restaurant delivery business. “If a Domino’s driver delivers a custom made Artisan Chicken & Bacon Carbonara Pizza with a Chocolate Lava Crunch Cake and a 2 liter bottle of Diet Coke is that different than a Peapod driver showing up with a California Pizza Kitchen BBQ Chicken Crispy Thin Crust Pizza, a Bertolli Triple Chocolate Strata Cake and a 2 liter bottle of Diet Coke (from the grocery store)?” the report asks.