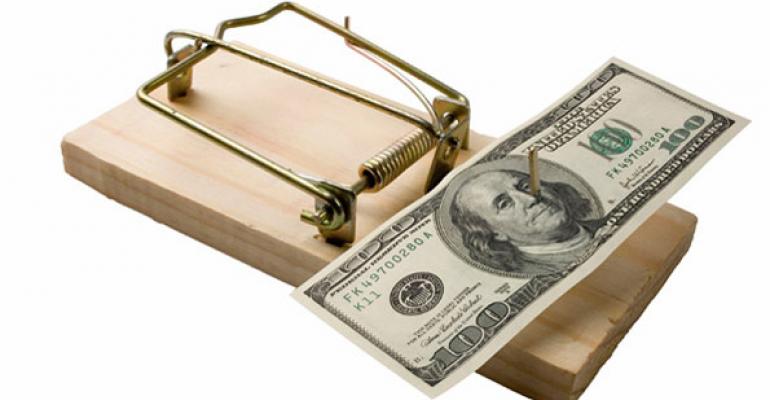 If you run a fancy restaurant that relies on a well-heeled clientele, it looks like filling your seats will be an ongoing challenge during the second half of 2013. That’s one of the key data points to emerge from the American Affluence Research Center’s latest twice-yearly tracking study of how the top 10 percent of wealthy U.S. households plan to spend money in the months ahead.

Dining habits are just one of the many spending areas considered by AARC. The company regularly surveys (by mail) consumers whose wealth places them in the upper 10 percent of all U.S. households. That’s 11.4 million households in all. For this most recent study, released in late April, participants had an average household income of $309,000, an average primary residence value of $1.2 million, an average net worth of $3.1 million and average investable assets of $1.8 million. Their average age was 57.6.

In other words, this is a survey of high-rolling boomers and beyond. Much as the Occupy movement liked to talk about the huge gap between the affluent one percent and the less-well-off 99 percent, you have to admit that life anywhere within the top 10 percent of net worth households looks sweet. You’d think that when people at this level want to go out to eat, cost wouldn’t be an issue.

But survey respondents told AARC that, at least for the rest of 2013, cost would be an issue. AARC asked them to “please indicate whether you expect to spend more money, about the same amount of money, or less money in the next 12 months than you did in the past 12 months.”

The results show that business from the top 10 percent of households should remain steady at casual and family restaurants. Ten percent of respondents plan to eat at casual and family restaurants more frequently than they previously have, 77 percent say their number of visits will remain about the same and 13 percent plan to visit less frequently. All in all, it should be a wash.

But the outlook is more ominous for upscale restaurants. Only five percent of those surveyed said they planned to increase their patronage of upscale restaurants while 66 percent said they would keep it about the same. But a whopping 29 percent plan to spend less. That’s a huge number, because these are older customers who have plenty of money—the core audience for many upscale and fine dining restaurants. If this group will be cutting back to this degree, who will be left to splurge on big-ticket dinners?

If you run an upscale or fine dining restaurant that caters to this older, wealthier demographic, consider yourself warned.