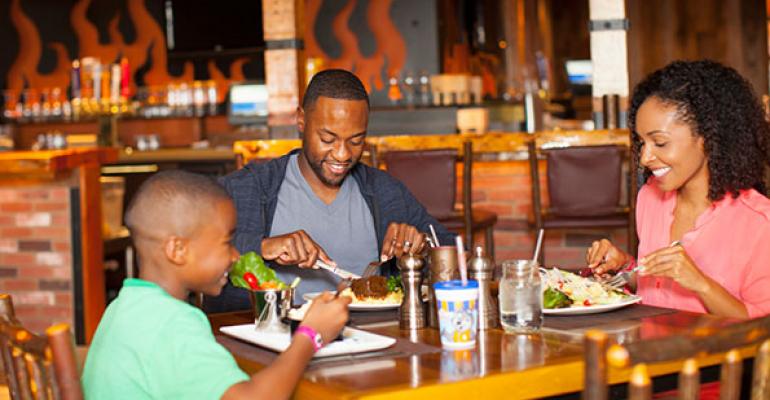 Should you consider a healthier kids' menu?

Chris Hammond can rattle off a dozen or more reasons you should offer healthier choices for kids at your restaurants. Some of the most important: It differentiates your restaurant from the competition. It fills a niche in the market. It plays to a giant share of consumers, families with kids, who are largely unsatisfied with their dining experiences.

For Hammond, corporate f&b director of Great Wolf Lodge, providing healthier and more high-quality food options keeps families from leaving his 12 parks for better food. “A lot of theme parks, when you enter you have nowhere else to go, you can’t leave. Our guests have outside choices and we don’t want them to leave,” he says.

“We are doing this for the right reasons, because we respect our guests,” Hammond says. “We’ve read the comments and we hear the questions parents are asking. We really want to deliver on those needs.”

Families with kids are a lost opportunity for the restaurant industry, according to The NPD Group, which says families with kids made 1 billion fewer visits to restaurants over the past six years. Families with kids represent 32 percent of U.S. households and $83.7 billion of total restaurant sales, NPD’s research shows. Along with offering a kid-friendly environment and perceived value, restaurants can begin reversing that trend by expanding their menu offerings.

For Hammond, giving parents healthier choices for their kids not only makes business sense, it has become a passion within his own family. Like many parents, before Hammond’s daughter was born five years ago, he and his wife began researching how to best take care of a child. One thing that stood out is teaching them healthy eating habits at a young age.

He then studied blogs written by parents concerned about what is in the food served to children and about the industry of production itself. He looked at what guests were ordering in the restaurants, what they were feeding their kids and even what they were choosing not to order for kids.

As a result of what he had learned, Hammond took the following steps at Great Wolf lodges:

• Changed burgers to a fresh, all-natural beef burger containing only one ingredient: beef.
• Switched hot dogs from a brand that had 18 ingredients to Hebrew National, which has three ingredients: beef, water and salt.
• Implemented vegetables instead of fries as a side for kids’ meals and automatically including milk instead of a soft drink (unless the guest asks for something else).
• Changed the kids' mac ‘n cheese to a white cheddar mac ‘n cheese as to avoid serving anything with Yellow #5 in it.
• Serve organic juices, organic yogurt and organic ketchup.
• Serve all-natural chicken that is antibiotic- and steroid-free, as well as grass-fed beef for steaks.

Hammond admits the lifestyle he and his wife chose does not work for every family.

“Not all families are concerned with healthy eating,” he says. “We’re not on a crusade to make people healthier, but we want to make sure we’re being socially responsible. If you want your child to have organic or gluten-free, we have it available. We’re moving to organic ketchup because we want to be sure parents have these choices. We want them to have a great experience at Great Wolf Lodge when it comes to dining.”

There is no doubt that all those changes have cost Great Wolf money. Especially since they’re reluctant to pass the price increases on to the guests. “Going this route is very costly to us,” Hammond confirms. “On one side, we’re being socially responsible and delivering what our guests want, no matter the cost. But we’ve also found better ways to go about it—we’re understanding purchasing a bit better and often times we can find a different avenue to do something smarter.”

Healthier kids' options have been suggested for some time, but they’re often overlooked because of cost. Today we’re seeing more chefs embrace it. Nick Calias, the chef at Brasserie JO in Boston, has taken a similar approach, revamping his kids’ menu to make it healthier by including items such as turkey meatballs with pomodoro sauce. Instead of French fries, kids (or usually their parents) can choose from baked chips, apples in natural peanut butter or celery and carrot sticks.

“It makes us feel better as parents,” Calias says. “I don’t mind (kids choosing) a hamburger, but I like them having a side of fruit with it.”