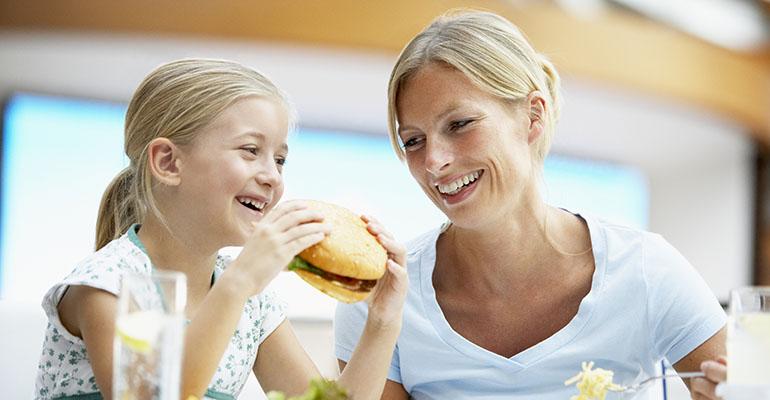 <p>Parents are most interested in finding healthy menu choices, according to Mintel research.</p>
Trends>Consumer Trends

With more Americans viewing “diet” as a four-letter word and gravitating toward well-rounded eating habits, many are looking to restaurants for some guidance.

Recent research from market intelligence firm Mintel suggests that 25 percent of Americans looking for nutritional claims on menus more in 2015 than the year before. About (48 percent) of consumers think finding healthy items at restaurants is too difficult, and 68 percent say more restaurants should call out healthy claims on menus.

What’s more, more than a third (36 percent) of those in Mintel’s study said they are opting to cook healthy at home more often rather than taking their chances at a restaurant. Another likely factor in that shift away from dining out: the perception shared by 64 percent that many healthy restaurant dishes are too pricey.

One way restaurants can satisfy consumers looking to indulge is by offering healthy substitution options. Nearly half (46 percent) of restaurant goers are looking for more healthful side options, and 27 percent are already replacing unhealthy sides with healthier options compared to last year. Another one-third (35 percent) of consumers are interested in more dishes that heavily feature vegetables.

In addition to side alternatives, Mintel foodservice analyst Caleb Bryant says restaurants should showcase healthful preparation methods, such as grilled instead of fried foods. “This provides options for whatever mood diners are in, whether they want to eat healthy, are looking to indulge, or possibly do both.”

Parents are especially motivated to seek out healthier menu choices, the study found. Two in five (39 percent) are ordering healthier food for their children more this year compared to last, and two thirds (66 percent) of parents said they would pay more for healthy foods when dining out (versus 41 percent of non-parents). Parents are much more likely than others (62 percent versus 36 percent) to agree that a menu offering healthy options is the most important factor when choosing a restaurant.

But indulgence remains a motivation for restaurant visits, too.

“While healthy dining is very important to families, restaurants need to remember that dining out is also considered a treat by many and an opportunity to indulge, even for children. Like adults, restaurants should look to cater to children who want nutritious items and those looking to treat themselves,” Bryant says.

Mintel’s findings mirror the most recent Dietary Guidelines for Americans, which recommend a variety of nutrient-dense foods and a shift to healthier food and beverage choices overall.