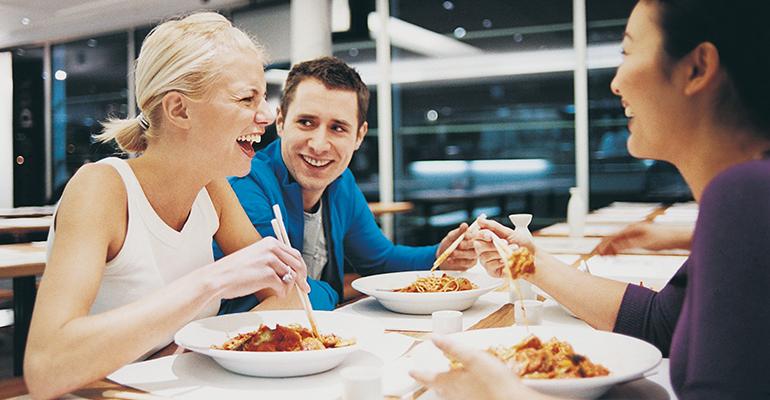 <p>Consumer spending on restaurants is up, thanks in part to strong growth in the job market, especially for millennials.</p>
Trends>Consumer Trends

Menu prices up. Food costs down. Millennials dining out as frequently as marketers have always hoped. Full-service operators can find plenty to love in the first round of data that describes how restaurants have done so far in 2016. Even better: Lower fuel prices and solid job growth figures should help these trends remain in place throughout the year.

Some of the best news comes courtesy of the National Restaurant Association. It cites U.S. Census Bureau figures that show eating and drinking places sales rose in February 2016 ($53.7 billion versus $53.2 billion in January). “The solid gain in restaurant sales outpaced the sluggish performance in overall retail, as consumers remain generally cautious in their spending habits,” NRA notes.

Margins on these sales were likely higher, too. That’s because Bureau of Labor Statistics figures show that menu prices increased 2.6 percent in the 12-month period ending February 2016, even though retail grocery prices were lower, down 0.3 during that same time. Factor in a 1.0 percent overall inflation rate and you’re left with 1.6 percent real growth. The quick-service segment recorded a 2.6 percent menu price increase; full service prices were up 2.4 percent.

Restaurant food costs should have gone down just a bit, too. The BLS reports that wholesale food prices declined 0.3 percent in February 2016 and are down a total of 2.3 percent since February 2015. “Although prices for many commodities remain generally elevated in historical terms, restaurant operators are expected to continue to get relief in 2016,” NRA predicts. If the current downward trend continues, it will represent the first time since the late 1990s that average wholesale food prices declined in consecutive years.

Another plus for the industry: real disposable income increased 0.3 percent in February, the third consecutive month it has risen by this amount. More money in consumers' pockets should lead to additional spending in the months ahead.

But will that money be spent at restaurants? A survey commissioned by Visa Business and Economics Insights and conducted by Prosper Insights and Analytics in January 2016 found that it should. Its findings show that 22 percent of millennials (ages 18-34) are now dining out more frequently than they did in the previous year. Thirteen percent of Gen X survey respondents (ages 35-54) also increased their restaurant spending, as did seven percent of baby boomers (55 and older).

“Consumer spending on restaurants has accelerated in recent years, thanks in part to strong growth in the job market, especially for millennials, and sustained lower gas prices,” according to Visa Business and Economic Insights analysis and the Visa Retail Spending Monitor (RSM).

“Restaurant spending increased around the same time that gas prices plummeted, freeing up funds for discretionary spending," the Visa survey found. "Restaurant credit spending growth began to accelerate in early 2014, with lower-income households (those earning less than $50,000 per year) leading the way—the consumer group benefitting most from the lower gas prices.”

It’s not a perfect storm of positive factors for restaurants. But it’s a positive scenario whose two key factors—job growth, low gas prices—should stay steady through the end of the year. Visa is calling for restaurant spending to remain “strong” in 2016. Let’s hope this prediction comes true.