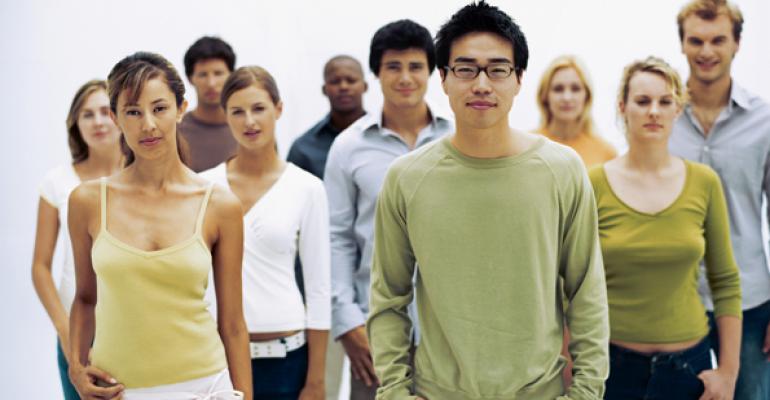 Give Millennials this much: social media interconnectivity has enabled them to answer survey questions about restaurant usage like no other demographic before. No wonder marketers obsess over them; there’s a constant flow of new data and ever-better tools to mine it. Expect even more studies now that Millennials rank as the country’s largest demographic group—one that happens to eat at restaurants with greater frequency than any other.

The U.S. Census Bureau made it official in late June. Its figures show that Millennials (born between 1982 and 2000, i.e., those 15 to 33 years old) now number 83.1 million and make up more than one-quarter of the total U.S. population. There are eight million more Millennials than Baby Boomers (born between 1946 and 1964 or those 51 to 69 years old). At 75.4 million, Boomers are the second-largest cohort.

Sheer numbers make Millennials a big fat target for marketers. What has resulted is “24/7 micropandering, psychographic analysis, a high-priced shadow industry of consultants and study after study,” says the New York Times. But when you look at where Millennials fit in on Technomic’s new Eater Archetypes classification scheme, they look like the sweet spot in the market for restaurant operators.

Take a look at the three largest segments of the seven Technomic has identified.

Functional eaters account for 20 percent of the population and acquire 22.2 percent of their weekly meals from foodservice outlets. “Comprised heavily of Millennial males, these consumers treat food as fuel and typically look for low prices from familiar restaurants,” says Technomic.

Foodservice hobbyists make up 19.7 percent of the population and purchase 20.6 percent of their weekly meals from foodservice. For this group, “Dining out is a hobby, they’re very value conscious, they look for a mix of new and familiar restaurants.” This group’s demographic makeup skews toward Millennials and Gen Xers who often have kids in their households.

Busy balancers—14.3 percent of the population who buy 23.4 percent of their weekly meals from foodservice—are a prime target. What are they like? Technomic describes the as “on the go, multitaskers, foodservice makes their life easier.” The group’s demographic makeup: “female, Millennials, mid to upper income.”

The upshot for restaurants: for most operators, like it or not, you’re increasingly in the Millennial-pleasing business. Eventually, they’ll become even more valuable customers, too—once they’ve finally paid off their student loans and gotten better jobs.