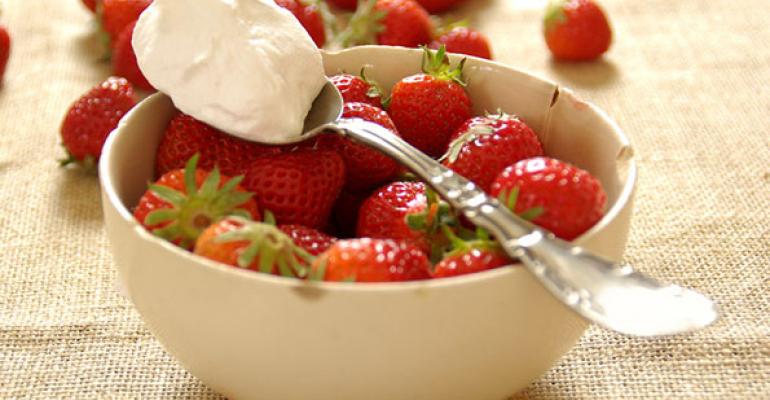 <p>The strongest growth of snack foods eaten at meals will be in the healthy category, including items such as yogurt and fresh fruit.</p>
Food & Drink>Food Trends

How to get your fill of snack revenue

As more consumers opt for healthy snacks either in addition to or in lieu of full-course meals, restaurants can capitalize by altering their menu, adding smaller plates with healthier ingredients and pricing those items appropriately.

Millennials—soon to be the majority of your dining public—are not only increasingly calorie conscious, they’re price conscious as well. This means more snack foods will be eaten at main mealtimes over the next five years, according to recent research from The NPD Group. The NPD food and beverage market research study forecast estimates that snack foods eaten at main meals will grow approximately 5 percent over the next five years.

Darren Seifer, NPD food and beverage industry analyst, suggests restaurants can no longer simply offer “snacks” and “entrées” sections on their menu, but need to consider ways to blend the two.

“It may require a paradigm shift,” he says. “It’s key to focus on providing convenience and addressing the needs that these foods meet rather than positioning foods in the predefined buckets of snacks or main meal foods.”

The strongest growth of snack foods eaten at meals will be in the healthy category, Seifer says, including items such as yogurt, bars and fresh fruit. Consumers perceive these items as more healthful and convenient. On the flip side, ready-to-eat sweetened snack foods and desserts, which consumers are less likely to eat at main meals, will be flat in the next five years, NPD forecasts.

Millennials and Generation Z place a strong emphasis on fresh food, and that’s driven by the multicultural and Hispanic segments of that generation, Seifer says. “Fresh food—fruit, vegetables, meat, fish—those generations will be driving that trend,” he adds.

Restaurants can benefit from increasing their snack offerings because snacks come in at lower price points, which makes them attractive impulse purchases. These items have stronger upsell potential and can boost sales throughout the day, especially during the midmorning and midafternoon dayparts.

In addition to NPD’s research, Technomic recently reported that snack consumption is on the rise, with half of today’s consumers (51 percent) owning up to at least two snacks a day. The firm’s Snacking Occasion Consumer Trend Report says consumers are broadening their definition of a “snack.” With wider range of foods and beverages now considered snacks, convenience stores have become restaurant competitors.

Other findings from Technomic’s study:

• Forty-five percent of consumers who order snacks at restaurants order from the dollar or value menu.

• Fifty percent of consumers indicate that healthfulness is very important to them when choosing a snack.

Millennials love to snack, but they don’t necessarily snack the same way as other generations. Understanding the needs and behavior of Millennials is essential to the success of your snack program, according to a report from Mondelez International Foodservice.

The report says Millennials are more careful about parting with their disposable income. However, they still enjoy going out and socializing with friends over snacks, so pricing snacks moderately is important. A popular way to menu snacks is by offering them as shareable plates, such as small plates, bar bites, combo meals, samplers and tasting flights.