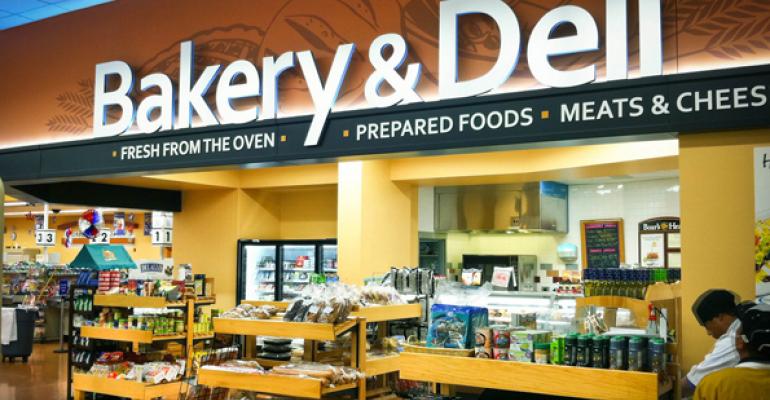 NPD and Technomic both forecast consumers will soon source more meals at supermarkets, fewer from restaurants.

Remember “home meal replacement”? You’d better be ready to deal with “restaurant meal replacement” if new forecasts from the foodservice industry’s most prestigious research companies turn out to be right. Both NPD Crest and Technomic say consumers will increasingly choose to source meals and meal components from grocery stores in the near future, instead of purchasing them from restaurants.

NPD sums up the findings of its “A Look into the Future of Foodservice” study this way: “Our recent foodservice forecast through 2022 indicates that instances of prepared food purchased at retailers for at-home consumption will increase by ten percent over the next decade compared to a four percent increase forecast for restaurant traffic.”

Which is to say, customers will be noticeably less inclined to spend money at restaurants than they currently are. Both baby boomers—who will be 65 years of age or older come the forecast period—and customers in their 30s will be hitting the supermarket prepared food counters hard, NPD predicts. Also, consumers in the 18-24 age bracket are expected to be heavy users of supermarket prepared foods for afternoon and evening snacks.

The end result of this shift: Retail prepared foods will grow at twice the rate of restaurant visits. It’s something the restaurant industry can’t ignore.

“Capturing visits from direct competition, like prepared foods retailers, has been the primary source for a restaurant operator’s growth over the past ten years and this will continue to be the case,” says NPD restaurant industry analyst Bonnie Riggs. “Efforts to pull consumers out of their homes and back into restaurants will require touting the benefits of eating out vs. staying at home and cooking or eating meals offered by home meal replacement retailers.”

Restaurant operators will want to pay close attention to the study’s analysis of past and future sales growth in select U.S. food and beverage segments from 2007 through 2017.

From 2007 through 2012, fresh prepared foods in retail grocery stores grew at an annual rate of between five and six percent and are projected to expand between six and seven percent between 2013 and 2017. Meanwhile, the rate of growth in foodservice barely budged in the 2007-2012 period, coming in at one percent. It’s projected to increase at a three-four percent annual rate between 2012 and 2017.

Here’s what the report says is driving these numbers:

“In reality, as a new generation of fresh prepared foods offers what is perceived as a fresher, healthier alternative, packaged goods manufacturers are under threat. Restaurant offerings, too, are imperiled by more than their often-higher price points. Full-service restaurants, especially, cannot offer the same convenience as fresh prepared foods, and innovation in many restaurant segments has been lacking. Whereas menus have not changed substantially in recent years, upgrades in retailers’ fresh foods departments are more readily apparent to the consumer.”

Uh-oh. Technomic and A.T. Kearney see supermarkets taking business away from restaurants at approximately the same rate NPD does. Both studies predict the lion’s share of new consumer food spending will be done in grocery stores, not restaurants. It could happen, but the wild card may turn out to be the quality and desirability of supermarket fresh prepared foods versus that of restaurant fare.

But if these predictions do come true, where will the restaurant industry find growth?

That’s a big unknown, but NPD and Technomic are similar in that they control mounds of data and have plenty of smart, experienced people to interpret it. Given the somewhat dismal future these studies suggest for foodservice, let’s hope NPD and Technomic are a little off the mark just this once. If they aren’t, consider their predictions a wake-up call for the restaurant industry.