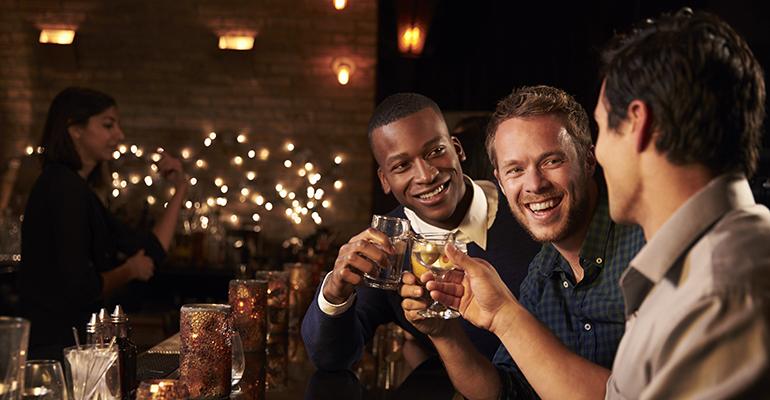 <p>Bar and restaurant guests might say &quot;yes&quot; to another round if they don&#39;t need to be sober to get home.</p>
Trends>Consumer Trends

Futurists see significant labor cost savings ahead for restaurants when robots take over tasks humans now perform. Now they think another emerging technology — self-driving vehicles — may also do wonders for an operator’s bottom line. A new Morgan Stanley report predicts that restaurant customers will soon choose to consume more alcohol because they will no longer have to worry about being pulled over for a DUI infraction on the way home.

Some customers may already enjoy an extra round at a restaurant, then call a ride-sharing service like Uber and Lyft when it’s time to leave. That’s just a preview of how it’s going to be when more people own self-driving cars. Morgan Stanley says autonomous vehicles will become mainstream faster than most people imagine, and both beverage companies and restaurants will benefit when they do.

Here’s what this venerable Wall Street company is telling its clients:

"Shared and autonomous vehicle technology help address the mutual exclusivity of drinking and driving in a way that can significantly enhance the growth rate of the alcohol market and on-trade sales at restaurants,” the firm says. “In particular, shared and autonomous vehicle options could drive more on premise consumption (more last call drinks), off premise consumption (drinks to go ? Buffalo Wild Wings is already studying this opportunity) and over time even the opportunity for the potential for alcohol sales from drive thrus,” analyst Adam Jonas and his colleagues argue.

The Morgan Stanley report doesn’t say much about the effect on wine sales. But the logic suggests customers who now order wine by the glass to voluntarily limit their consumption might begin to purchase full bottles instead. Why not? Even if impaired, they will still be able to get home safely in an autonomous vehicle world.

The report doesn’t say that drinking and driving should mix; it’s pointing out that soon they can.

“Drinking alcohol and driving cars represent hundred of billions of consumer hours and trillions of dollars of economic activity. These activities, in theory, should be mutually exclusive due to the threat to public health and safety (one-third of traffic fatalities are alcohol related) but in practice are frequently not (more than 1.1 million DUI arrests per year),” the company’s analysts note.

“The introduction of ride sharing services like Uber have been shown to significantly reduce the incidence of DUI arrests in select communities. For example, San Diego saw a 14 percent reduction in DUI arrests the following year when Uber operations began in 2011. The temporary banning of Uber in Austin has been associated with a reduction in alcohol sales.

For its part, Uber cosponsored a study with Mothers Against Drunk Driving to document this very effect. Among its findings: Drunk-driving crashes fell by 60 per month among drivers under 30 in California markets where Uber operates following the launch of uberX. That’s an estimated total of 1,800 crashes prevented since July 2012. And in Seattle, drunk-driving arrests declined 10 percent after Uber service became available. Another interesting correlation: In Pittsburgh Uber volume is highest at 2 a.m. when bars close. Drunk-driving crashes peak around midnight in Miami, the same time Uber weekend requests now do.

A separate study, conducted by the University of Southern California and Oxford University, says this Uber effect doesn’t exist.

Still, 88 percent of respondents over the age of 21 told Uber/MADD survey takers they agree with the statement that “Uber has made it easier for me to avoid driving home when I’ve had too much to drink.” This number provides an idea of how many people would perhaps like to drink more during their evening out but are looking for a way to do so without getting into trouble.

So how much more will customers drink when shared and autonomous vehicles become commonplace? Morgan Stanley says operators can figure on one extra drink per person.

It’s a win all around if this prediction comes true. Companies that produce alcoholic beverages will see their sales volume increase. Restaurant and bars will sell more high-margin alcoholic beverages. Car companies — not just Tesla but the many other manufacturers working on driverless cars — will have an unbeatable selling point for their vehicles. And perhaps most importantly, police, public health officials and particularly MADD will be happy to see drunk driving numbers fall, as they should if Morgan Stanley is correct.