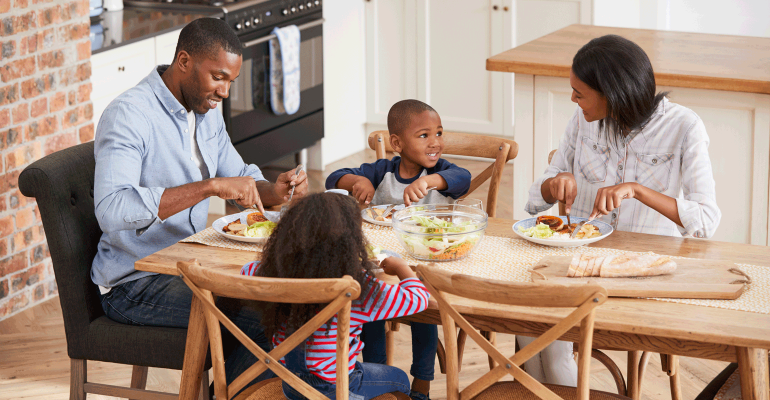 In the 1980s and ’90s, when Americans were struggling to get dinner on the table after work and shuttling kids between activities, microwaves, frozen dinners and fast-food restaurants were mainstays.

Unlike recent generations, consumers today are shifting toward eating more dinners at home, including those purchased at restaurants, according to The NPD Group’s 32nd annual Eating Patterns in America report.

As a result, the trend toward incorporating foodservice items from restaurants or retail into a “blended” in-home dinner is on the rise, NPD found. In the year ended in February 2017, 18 percent of in-home meals included at least one ready-to-eat item from foodservice, up from 15.5 percent in 2015.

“It’s clearly a generational thing,” said Portalatin, who cited adults under age 40, which includes Millennials and Gen Z, as the primary consumers of the trend.

The lower cost to eat at home and higher cost to eat at restaurants, combined with the ability to order and have delivered just about anything online, are among the reasons consumers are eating more at home. Additionally, there are fewer Americans in the workforce today, due in part to a larger retirement-age population. Plus, a growing number of those in the workforce are doing at least some work from home, according to recent data from the Bureau of Labor Statistics.

“The opportunity for restaurants is, increasingly, how can I facilitate a meal at home,” Portalatin said.

More operators are working to be part of at-home dinners. Executives from Chicken Salad Chick, an Auburn, Ala.-based fast-casual chain, and Al Forno's, a new take-out and delivery-only pizza restaurant in Atlanta, share how they are meeting consumers’ new convenience needs.

Making it easy to grab and go

Chicken Salad Chick has been selling chicken salad as a grab-and-go item since opening its first location in 2008. The first unit was a drive-thru and takeout-only spot until it morphed into a sit-down concept.

In the last 18 months, the 74-unit chain has tweaked grab-and-go offerings to better meet customers’ needs.

“We still firmly believe that people want to sit down and dine, but we also know they lead hectic lives,” said Scott Deviney, CEO of Chicken Salad Chick. “Not everybody has time to sit down and eat.” To meet the need, Chicken Salad Chick’s Quick Chick section, located at the front of each restaurant, features to-go containers of 12 flavors of chicken salad, as well as gourmet sides, such as grape salad, pasta salad, broccoli salad and fresh fruit. However, the old the glass door front cases have been replaced with open-air refrigerators for easier grabbing, and the chicken salad is also available in a smaller half-pound portion.

“We want to make it easy to go, take it back to the office or home, or to an event,” Deviney said.

While the changes haven’t necessarily grown the amount of Quick Chick sales, which remain at about 25 percent of business, Deviney said they have inspired more customers to purchase several small portions, versus a single large one, as a way to explore a variety of flavors.

“Quality pizza at home is difficult,” Lewis said. “It requires some level of skill and equipment.”

Customers place orders online and choose from a menu of classic and customizable pies with locally sourced and seasonal ingredients toppings, such as artichokes, broccoli and garlic. Crusts are baked fresh daily to a holding point and feature the telltale burn marks of authentic Neapolitan pizzas. They’re then topped and boxed to order. Extras, such as fresh arugula, basil or peppers, are packaged separately and added after cooking. The only equipment required is a standard oven, and the only skill needed is the ability to slide a pie into an oven set at 450 degrees Fahrenheit for five to seven minutes.

Al Forno's opened in mid-October, so it’s too soon to tell if it’s a hit, but Lewis expressed confidence.

“It’s the future of restaurant thinking,” he said. “You can’t do everything in this market this way. Certain dishes you’re able to showcase almost exactly as you’d experience at a restaurant. I think this is one of them.”

Correction: Oct. 30, 2017  An earlier version of this story misstated the names of Al Forno's and The NPD Group's report. They have been updated.